ZILLER: There's a buzz building in Sacramento. After the league's second-longest playoff drought, after seven seasons of fewer than 30 wins, we can sense it. We can sense a team that can really compete for a playoff spot.

If, like, all 50 things that need to go perfectly go perfectly. Starting with the team's best player and the team's famous coach getting along, as they did not appear to do through much of the offseason.

But seriously, this team is pretty loaded with veteran talent. Beyond DeMarcus Cousins, there's Rudy Gay (who is pretty good in his current role), Darren Collison (who was awesome before his injury last season), Rajon Rondo (who is really smart and can still pass the ball effectively), Marco Belinelli (who can shoot) and Kosta Koufos (who is a large human). Plus kids like Willie Cauley-Stein and Ben McLemore, and vets like Caron Butler. This is not a bad roster, right? 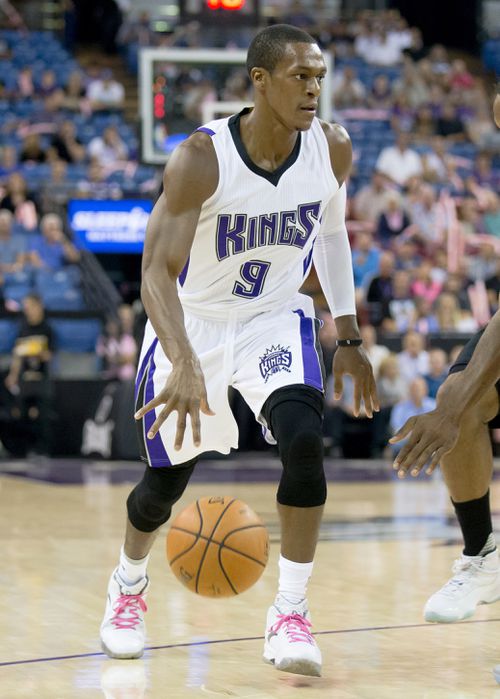 Best addition: Willie Cauley-Stein, who might be a perfect fit next to DeMarcus Cousins

Biggest loss: Jason Thompson, who had been with the Kings his entire career

In one sentence: The Kings have loaded up with a strange mix of talent, but there's a decent chance it could actually work out for them.

FLANNERY: Look at you being Mr. Optimist.

Allow me to play Devil's Advocate, then. Rondo hasn't been effective since his knee injury and may be done as a player. Collison is coming off an injury and is being replaced by a guy who may be done. Belinelli won't have the benefit of the Spurs' spacing, and Koufos is tall. I'll grant that Rudy Gay has been good in Sacramento, but it hasn't translated into much on-court success.

This comes down to Cousins and George Karl. Can they coexist and find their happy basketball place together? I have my doubts. This team is too combustible to take seriously because the talent -- and there is talent -- isn't good enough to compensate for when things go off the rails.

ZILLER: There are going to be some spacing issues if McLemore doesn't become a lights-out gunner and Gay doesn't take smarter shots from distance.

That said, Rondo can still pass. The Kings have been one of the worst passing teams over the past decade. Cousins hasn't had a top-drawer distributor on his team ever in the pros. His starting point guards have been Tyreke Evans, Isaiah Thomas, Collison and Ray McCallum (with a few weeks of Greivis Vasquez and a brief moment of Jimmer Fredette in there). Rondo can still pass. He's bad for spacing, his defense has fallen apart and he won't score more than 10 most nights. But the dude can still pass. That could be a big boost to the offense, especially in a George Karl system.

As to whether Karl and Cousins can coexist: I'm not fully optimistic, but I will say that Cousins is driven heavily by winning. He's only happy when he's having success and the team is winning. By all accounts he really liked Ty Corbin ... until they made Corbin take over for Michael Malone and the Kings stopped winning. Boogie's demeanor changed almost immediately. Cousins is not a pleasant teammate by most accounts, and Karl likes to prod and push his stars. That's not a great recipe. But success does amazing things for attitudes, and if they get off to a good start then I can see them getting along.

Can I also make a case for the importance of Omri Casspi? He's close with Cousins and one of Karl's favorites. He's also poised for a big season -- he shot 40 percent from three once Karl took over last season. I understand that pinning your hopes on Omri Casspi is trouble, but I don't fricking care.

FLANNERY: It's better than nothing, I suppose.

What constitutes success in your mind? 30-35 wins seems right to me and they aren't making the playoffs with that kind of record. The new additions feel like patchwork. Perhaps a better question: Do you think Vivek Ranadive gets religion if this blows up in his face?

Sactown Royalty previews the Kings season after a wild summer.

The Kings are talented but volatile

The Kings have improved their roster but chemistry issues could derail a potentially good season.

2015-16 Sacramento Kings Preview The Kings are talented but volatile

ZILLER: I'll answer that last question first: I don't even know what Vivek getting religion would look like. It's clear he believes that hiring personalities and the so-called Basketball PhDs trumps the smart young gunners (witness Karl and Vlade Divac replacing Malone and Pete D'Alessandro); he's suggested the NBA is a league of cronies. I think he's all in with Vlade and company for the foreseeable future. I don't think that's the brand of religion most expect.

I think 35 wins is the hard target, and being respectable as late as March is the soft aim. They are talking playoffs but that's too much to ask this soon unless Rondo regains full form (unlikely) or there's another big surprise. And let's keep in mind that the most serious goal is being respectable going into the debut of the new arena.

FLANNERY: That's the part that will always mystify me. You just saved the team. You have a new arena on the way. That should have bought a few years of good will while you build the team organically around your franchise center. After all of this dysfunction and chaos, what do you have? A 35-win team. If that's the buzz, then I'm not hearing it.

ZILLER: I think the fear was that if you don't show you're hustling to win ASAP, you lose Cousins mentally. Which might be right; he's got to be sick of all of this losing and uncertainty. I also think Vivek has constantly been trying to out-Warriors the Warriors, and it's just not working.