ZILLER: Let's tackle the elephant in the room up front. Neither of us are very high on the Raptors, and Toronto fans are super passionate, and we're going to get raked over some quite hot coals if Toronto gets off to a fast start.

They added DeMarre Carroll (really good) and Cory Joseph (cool), got a meeting with LaMarcus Aldridge (neat) and lost Amir Johnson and Lou Williams. Obviously both Amir and Lou have their limitations, but I'm not personally convinced getting Carroll and Joseph makes up for the veteran losses Toronto suffered, especially given the lack of size up front. Carroll will be playing some power forward; unless Bebe Nogueira is ready to play real minutes, the other options at the four are an undersized Patrick Patterson, an aging Luis Scola and James Johnson. I know the NBA's getting smaller, but I'd be pretty nervous about the size deficiency in T-Dot. 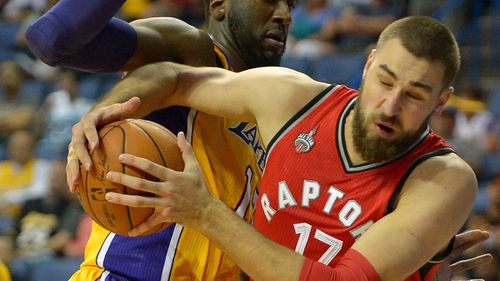 Biggest loss: Amir Johnson, who took a deal with the Celtics this season.

In one sentence: The Raptors have been very good in the East, but it's hard to see where they can improve on what they've done so far.

FLANNERY: I'd be nervous about a lot of things in T-Dot this season. Let's stipulate that this is still a decent team and by decent, I'm thinking 45 wins and playoffs. Three years ago that would have been fine, but this feels like stagnation. I like Kyle Lowry. I like DeMar DeRozan. I like Dwane Casey and DeMarre Carroll. They're all good at what they do. But you look up and down this roster and don't see a lot of potentially great things.

The one variable that makes me think there's more potential here is Jonas Valanciunas. He's still so young and if he puts it all together, then the equation changes considerably. But we have to see it first.

They could absolutely get off to a decent start just like last season. Teams that have been together for a while tend to have an advantage early in the season. But they've got 11 of their first 15 on the road, with a lot of that coming against the West. If they struggle early, things could get very tense.

ZILLER: Valanciunas is a big piece of the potential of this franchise and that actually makes me a bit pessimistic about the Raptors. He hasn't shown the sort of defensive ability that made him such a high draft pick. He's efficient in the post and there are the outlines of a good overall offensive center there. But the fit with the coach and the rest of the roster just doesn't seem right. I think Valanciunas can be a productive NBA starter, but I'm skeptical he'll ever reach All-Star status. And I feel like the Raptors' long-term goals need Valanciunas or one of their eventual big men to be an All-Star. But big men do develop on their own schedules, and Valanciunas is young, so he could prove this hypothesis very wrong. We'll see.

This team depends so much on Kyle Lowry, doesn't it? When he's healthy and happy, he's a star and the Raptors are terrific. When he's banged up, he's mediocre and so is Toronto. So in projecting the Raptors, we're in some ways being asked to project the health of a player whose style has caused him to miss about 10 games per season in Toronto and frequently play at far less than 100 percent. Injuries affect every team, but I feel like predictable, frequent minor injuries have an overbearing influence on the Raptors.

FLANNERY: I've been a huge Kyle Lowry fan since I first saw him at Villanova. The issue is that he has to play all-out to be really effective and that inevitably wears him down over the course of the season. DeRozan is good player, but he's too inefficient for that leading role. Terrence Ross hasn't shown that he can be anything more than a decent role player. So, who picks up the slack when Lowry is banged up? This is what Paul Pierce was getting at when he said the Raps lacked the necessary ingredient that made you worried as an opponent. Sorry, but the Truth hurts.

A big question I have for Toronto is what happened to the defense? The Raps were solid to good two years ago on that end and fell off a cliff last season with a lot of the same personnel. If they can somehow get back to defending at a top-10 level, then I'd be willing to reconsider my stance on their prospects. That's on them.

ZILLER: Agreed. They have some good defensive players -- especially with Carroll in place -- but I'm mad concerned with what happens up front if you start Patterson or go small from the jump. Lowry, Carroll and to a lesser extent DeRozan can do their jobs on the wings, but teams will attack the hell out of the paint. Valanciunas hasn't proven to me he can do anything about that.

I'm interested in what Toronto would consider a successful season. They might actually be the first "victim" of the seeding reform that doesn't guarantee division winners a top-4 spot. They'll win the Atlantic but I think they could end up as low as No. 6. I think they need 50 wins and a series victory to continue down this path with this coach and main cast, though.

Raptors retool, but have they already peaked?

The Raptors have most of their future riding on the success of this season.

Raptors retool, but have they already peaked?

FLANNERY: The Raptors set a franchise record for wins last season with 49 and throughout the second half of the year there was sense that it was a hollow accomplishment. Casey was understandably annoyed by that notion, and it's hard to blame him. Getting 50 wins is nice, but not much of an improvement. Winning a playoff series would be validation of the core to some degree. Neither of those things indicate whether this team can seriously contend for a title, or whether the core can improve.

If the defense improves back to 2013 levels, if Lowry can stay healthy and productive and if Big Jonas takes a huge leap in his development, then I could see continuing down this path. That's a lot of ifs, unfortunately.

ZILLER: The good news is that the division (16 games) is pretty awful and the conference (36 more games) is shallow. Toronto might be able to grab 35 or so wins in the East itself, which means they can go .500 against the West and hit 50. A soft No. 3 seed is incredibly attainable even should some of those ifs turn into nahs.

Man, I hope Drake doesn't drop a track on us for this skepticism. And I sure hope Raptors Twitter doesn't start calling me Meek Zill.