ZILLER: The Jazz were everyone's darling team before Dante Exum went down in international play. Unsurprisingly, folks are less excited betting on a team led by Trey Burke. Where are you at on Utah? 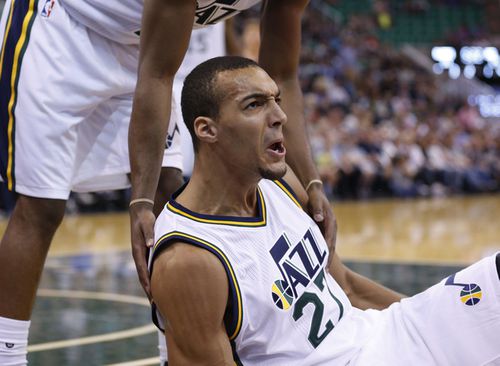 Best addition: Alec Burks, who missed most of last year with a shoulder injury.

Biggest loss: Dante Exum, who tore his ACL and will miss the season.

In one sentence: Exum's injury has tempered expectations for this season, but after a dominating finish to last season, the Jazz are still a viable contender for one of the West's final roster spots.

FLANNERY: I have them in the playoffs, given the way their defense simply dominated teams over the last few months of the season. Their numbers were, quite frankly, astonishing once Rudy Gobert took over in the middle and it's not all him. Derrick Favors is a plus defender. Gordon Hayward is solid. Exum was really good, which was even more impressive considering he was a rookie. Like everyone else, I'm concerned about the backcourt and wonder if there will be enough shooting to spread the floor, but this looks like a younger version of Memphis to me. The Exum injury is a major downer, but they do get Alec Burks back and their core still has ample room for development growth.

ZILLER: The defense could be top-5 (maybe better), but I'm really concerned about the offense. Gobert, for all his gifts, isn't a scorer or passer. Favors is more a David West than a Pau Gasol on offense. As you mentioned, backcourt shooting is a problem. Gordon Hayward is fantastic, though, and he's about due for an All-Star push. There really aren't more than a couple of small forwards better.

Alec Burks is so important here, and I have little idea what to make of him.

FLANNERY: Don't forget about Rodney Hood and Trey Lyles either. There's a lot of intriguing pieces to this puzzle that have yet to sort themselves out.

Your concerns about Utah's offense are entirely fair, but that unit was still middle of the pack with a slow pace, lackluster shooting and a high amount of turnovers. Many of those things should improve with time and experience. There was a lot riding on Exum's ability to make a second-year jump. We'll have to see whether Trey Burke can handle the job. This may be his last, best shot at securing a long-term future as a starting point guard in the league.

Other than that, I love this team's upside and potential staying power. If they can figure out a few more things offensively this can be a really good team for a long time.

Jazz hope a young roster can take the next step

With Rudy Gobert and Gordon Hayward, Utah has one of the more intriguing young rosters in the league. But will that be enough in the powerful Western Conference?

The Jazz are going to be out to get you

The young and hungry Utah Jazz look to pounce upon opportunity and assume some level of regional power in the Northwest Division this season.

ZILLER: Good points all around; they are absolutely set up for long-term success with Gobert, Favors, Hayward and Exum at the very least. Everyone else is some degree of gravy.

That said, I don't see them making the leap into the playoffs, even with two teams likely dropping out. The Thunder should be back and I think the Suns are better positioned to take the other open spot (assuming New Orleans stays in). The margin of error is Gobert-thin and Exum's loss hurts.

FLANNERY: Let's close with a ridiculous hypothetical: Given a choice of rosters long-term, would you take Utah's or New Orleans? You have to say New Orleans because of Anthony Davis ... but the Jazz have a lot more in place.

ZILLER: Ooh, good question. Like you, I have to take New Orleans solely because of Davis: nothing is more important than having the potential best player in the world, as LeBron's Finals streak shows. But I had to think for a second because the Jazz core is so promising at the most important positions.