Is winning in San Francisco enough to appease Oakland fans?

Oracle Arena, the current home of the Golden State Warriors, is in an East Oakland industrial park. The pedestrian walkway between the arena and its BART stop runs between a factory for Western Colloid Products Inc., a chemical manufacturer that specializes in waterproof coatings for roofs, and ABC Supply Co., Inc., a wholesale chain that sells roofing and sidings. Cross over a set of railroad tracks and an artificial conduit brings into view more of the factories and equipment yards that constitute Oracle’s neighborhood.

It’s strange digs for a tech-driven franchise dubbed Silicon Valley’s favorite — an NBA superpower that’s won two of the last three championships and now fields one of the greatest teams in league history. It’s an appropriate home for a scrappy perpetual underdog, a team that hails from a blue-collar port town, with long-suffering, working-class fans.

The Warriors, of course, are both of these things. Or they were, anyway. 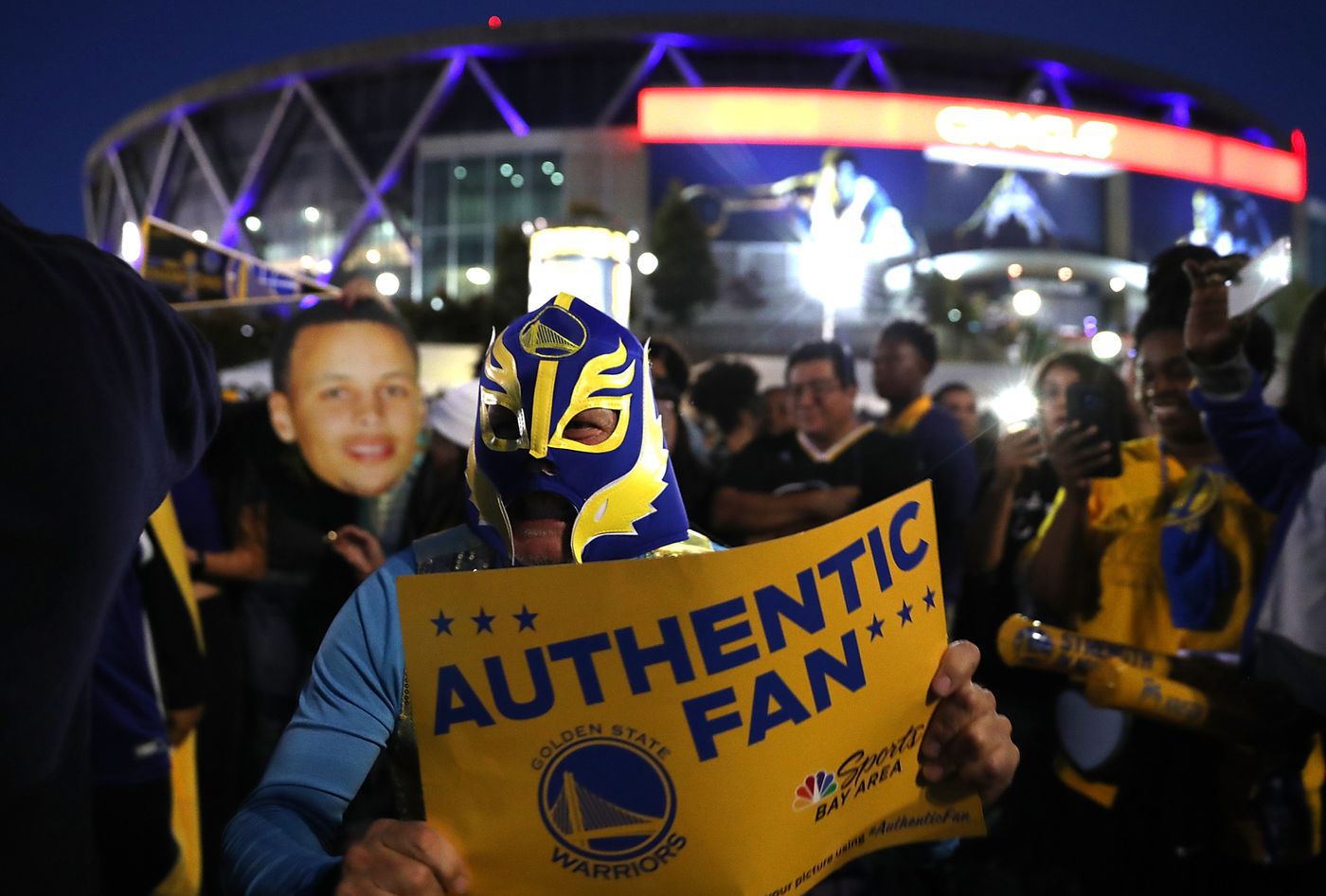 Golden State will play in Oracle Arena for two more seasons. For the 2019-20 season, they’ll move across the Bay, to the Chase Center, the shoreside arena that the Warriors’ ownership group is building in San Francisco. According to the arena’s website, it will, among other things, “exemplify state of the art technology, farm-to-table dining, first-to-market experiential retail.” In a promotional video, a Warriors executive says he imagines the Chase Center’s plaza hosting yoga or wine-and-cheese events.

In the press release announcing the move to San Francisco had been finalized, the organization said the move would bring the Warriors “back home,” a claim that is spiritually true only if any place you’ve previously lived constitutes a home.

The team was named the San Francisco Warriors after arriving in the Bay Area from Philadelphia in 1962. Despite the fact they went to the Finals twice and their rosters included two all-time greats in Wilt Chamberlain and Rick Barry, The City shrugged. The Warriors spent the next nine years hemorrhaging money as ticket sales cratered to the lowest in the league, shuffling between arenas in San Francisco, Daly City, and Oakland.

In 1971, desperate to keep the team from folding, then-owner Franklin Mieuli announced the team would split games between Oakland and San Diego; he renamed the team after California’s nickname to reflect its binary orbit. The deal with San Diego evaporated. The one with Oakland did not. The Warriors play in the East Bay because Oakland embraced them after San Francisco shunned them. One could easily argue the Warriors didn’t really have a home in the Bay Area until they moved to the Oakland-Alameda Coliseum, now called Oracle Arena.

The long drought between the Warriors' first championship in the Bay, in 1975, and Joe Lacob’s ownership group buying the team in 2010 was characterized by a diehard, rabid fanbase and futile basketball. Perhaps the fact that most neatly encapsulates the relationship the Warriors had with their fanbase in this era is that two incarnations of the team became so revered that they have earned nicknames — “Run TMC” and “We Believe” — and they won this status despite the fact each won a single playoff series.

While Oakland embraced the Warriors, the organization never fully embraced Oakland, at least not in front of others. None of the previous ownership groups ever renamed the team after the city in which it played — a decision that doesn’t seem completely unreasonable at first. The Warriors are trying to straddle the line between the grit of Oakland's A's and Raiders, and the gloss of San Francisco's Giants and 49ers. The geographically ambiguous nickname might just be a way of keeping the team more broadly marketable to the entire Bay Area. But that logic didn’t stop the team from donning San Francisco throwback jerseys or selling San Francisco merchandise. And it’s hard to escape the idea the Warriors didn’t want to associate their brand too strongly with Oakland’s reputation — too violent, too street, too black.

If it was intentional, it worked. National TV broadcasts of Warriors home games usually use the Golden Gate Bridge or the San Francisco skyline as their establishing shot going to and from commercial break. Shaquille O’Neal apparently managed to get through his entire career without realizing that the Warriors played in Oakland. But even Oakland isn’t quite Oakland anymore.

Housing prices all over the Bay Area have risen sharply, driven up by the tech money overspilling San Francisco’s borders, and no place has felt the change more acutely than Oakland. In July 2010, when Lacob’s ownership group bought the team, the median home price was $288,000. Today, it is $680,000. The deluge of money is remaking Oakland’s demographics, making it richer, whiter and more unequal.

These changes are more slippery to track within the Golden State fandom, but are no less apparent. Warriors games used to be racially, culturally and economically more diverse than they are now. The jump in prices of Warriors tickets at Oracle mirrors the jump in housing prices: Depending on which ticket reseller you look at, the average price has between doubled and tripled since 2010. Some longtime season ticket holders resell most of their tickets in order to hold onto their seats; some who would go to a few games a year now only watch on TV. But perhaps the most telling (if anecdotal) sign of the change is the way Oracle crowds seem to be livelier and louder when the team is playing mediocre opponents than during its marquee matchups. 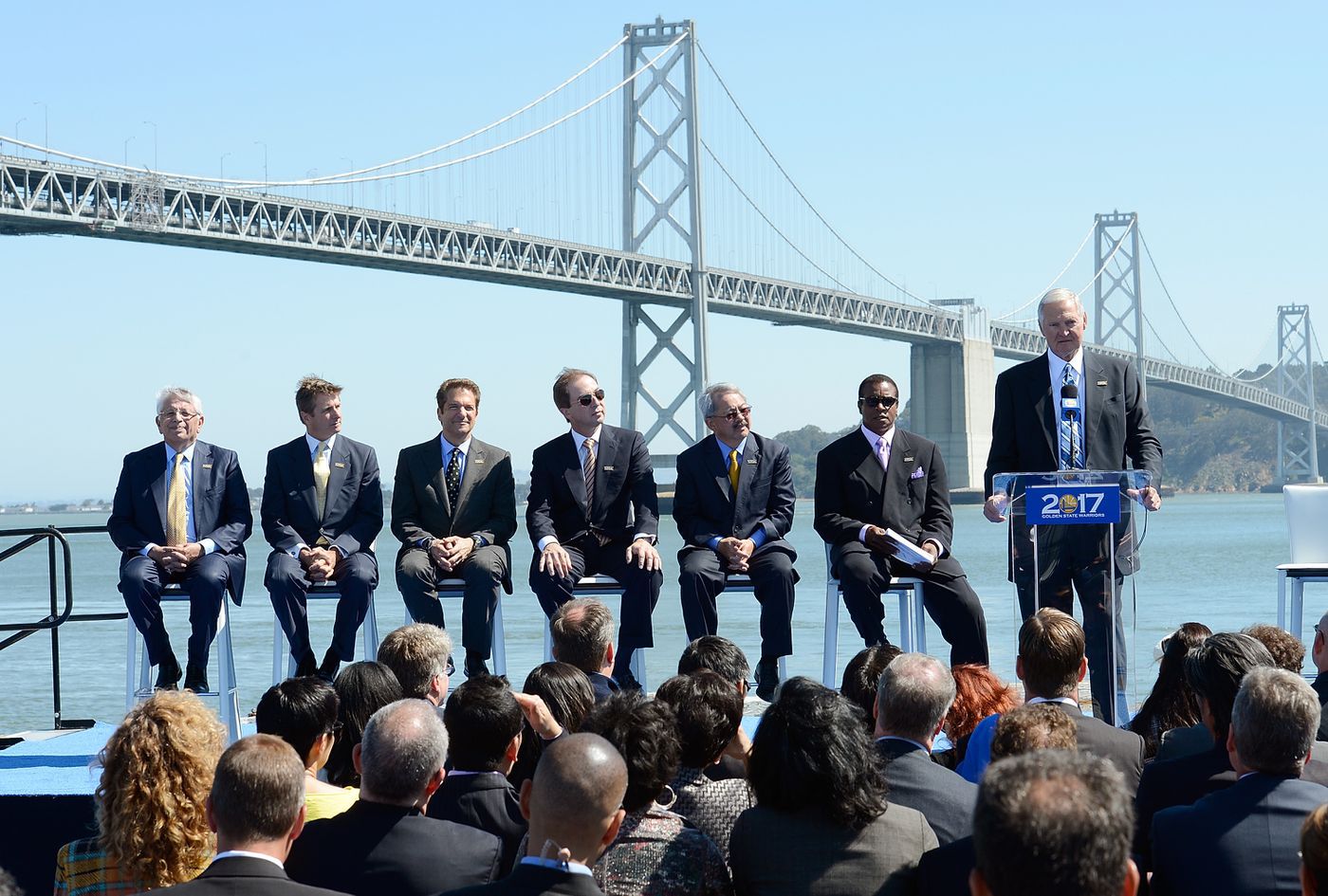 It's easy to demonize Lacob and the ownership group he leads for taking the Warriors from Oakland and giving them to its well-heeled rival. But the groundwork for the Warriors' move to San Francisco was laid at the same time as the foundation of its current success.

Lacob inherited a dysfunctional team whose only blue-chip asset was its young point guard, and built a roster and culture that complemented him. Steph Curry may be the main reason the Warriors are what they are, but Lacob created an environment in which he could thrive and made Oakland a place he wanted to stay. He took risks to do so, like trading fan-favorite and leading scorer Monta Ellis for injured center Andrew Bogut, or firing the coach who had led the team back to relevance, Mark Jackson, and replacing him with a rookie head coach in Steve Kerr. And it will be the Warriors’ ownership group that takes on the risk of the new arena, which they are building completely with private money. (In a world in which pro sports teams regularly extort new arenas out of cities by threatening to move, this deserves mention.)

The bittersweet truth is that, pride and tax dollars aside, the impending move might be better for Oakland fans than if the Warriors were staying in Oakland. The team will have to be more intentional about keeping their connection to the East Bay alive, rather than taking it as a tacit given. This offseason, the Warriors took the change in the league’s uniform vendor from Adidas to Nike as an opportunity to give Oakland its long awaited alternate jerseys, which combine Oakland’s tree symbol with its name for itself — The Town.

In 2015, the Warriors’ defeat of the Cavaliers in the NBA Finals ended Oakland’s 36-year championship drought. During the rally that followed the title parade, Oakland mayor Libby Schaaf ended her opening welcome by presenting owners Lacob and Peter Guber with a key to the city. They both looked like they’d received a garish Christmas sweater from their least favorite grandma, Lacob trying to overcome the awkwardness by doing a brief slapstick routine in which he pretended the oversized key was too heavy. As they returned to their seats, Lacob tried to hand off the key to Guber. Guber handed it right back.