The culture that saved the Thunder

At least for now.

This is how every Oklahoma City Thunder practice ends, in a cacophony of unmistakable noises that slowly fade out over an hour. It’s exactly what you would expect: sneakers meeting hardwood, rattling rims, lively banter. The unofficial drum beats that keep steady pace are the basketballs, pounding into the floor over and over and over again.

The Integris Thunder Development Center has six ball racks built around its two courts, each holding nine Spalding basketballs. As the players trickle off the floor for the day, an obsessive-compulsive tradition kicks in: Every ball will be rotated so the “SPALDING” logos face outward in synchronicity.

No one really cares when it started, or why, but the tradition moves along organically now. The Thunder won’t shoot better because of it, and it’s not really a superstition, either. It’s just what they do now. But regardless of who started the tradition, it reflects Oklahoma City’s attention to detail. That, in turn, illuminates their culture.

The Thunder spent a decade cultivating a buttoned-up identity befit for the impressionable young players they traditionally target when building their roster, one that worked so well that there was no reason to tweak it until now. This season, though, they made needed moves to welcome Paul George and Carmelo Anthony, two established All-Stars who have developed their own habits in very different places.

It depends if they're willing to buy in. 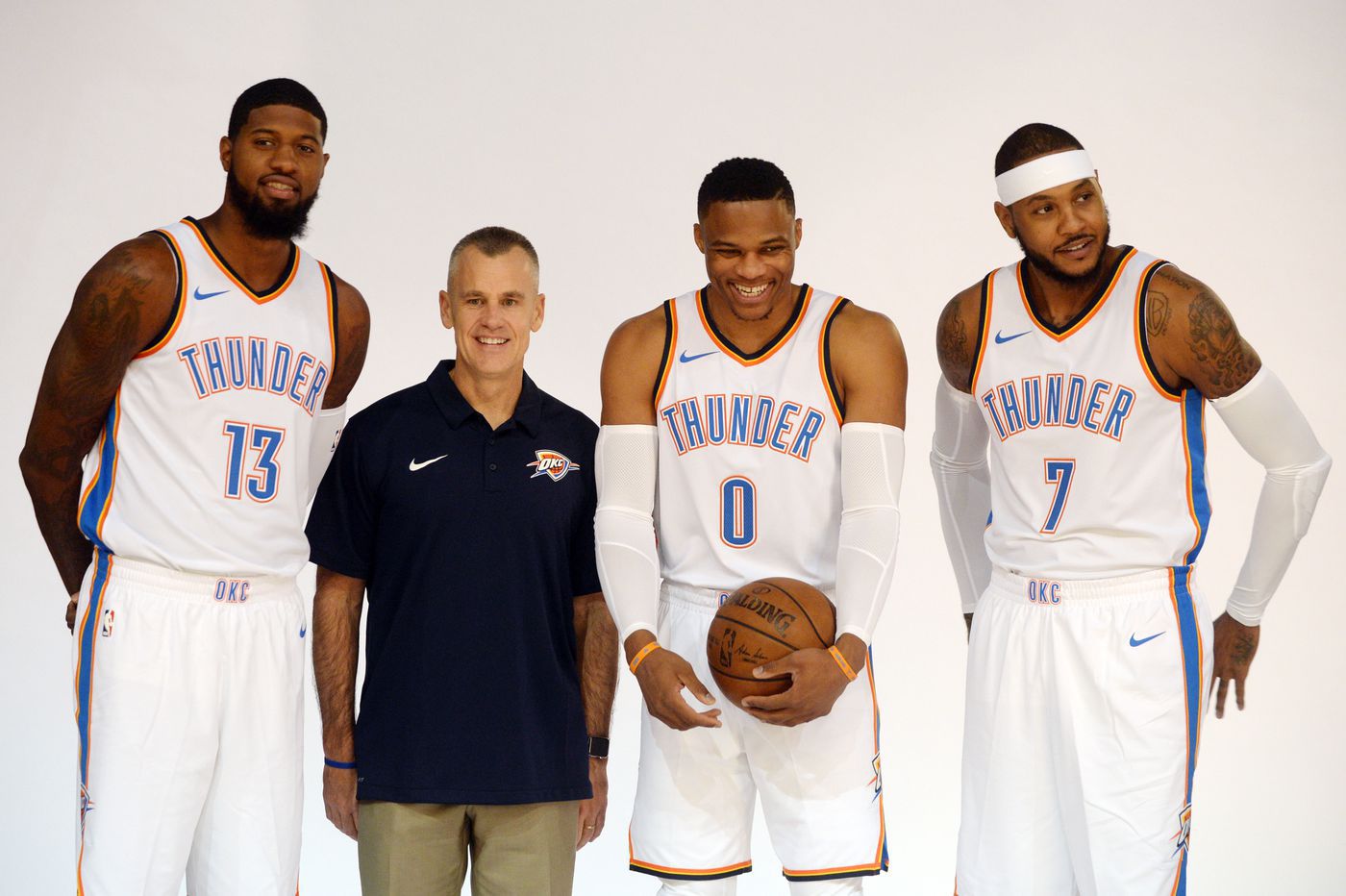 Basketball is complicated as hell, but it can also be real simple. When it comes to building a roster, just follow an equation: value gained > value lost.

Oklahoma City violated that equation last summer when Kevin Durant, one of the best three players in the league, left them for nothing in return. It takes years for most franchises to recover from losing a player that foundational. Hell, even teams who have traded top-five stars and received some value in return are only now becoming relevant again, like with the Minnesota Timberwolves and Kevin Garnett.

For the Thunder, this didn’t take years. It took one summer.

After Durant’s departure, the Thunder doubled down on Russell Westbrook and let him run rampant for an MVP. It was delightful, but an inevitable first-round defeat followed. They were a team built for two stars in a league that demands several of them, and Westbrook was but one.

From atop the franchise, general manager Sam Presti preached patience.

“We feel really good about the momentum that’s been created,” Presti said at the Thunder’s exit interviews last May. “We’re trying to do something here that I don’t think there’s a ton of examples of in the NBA.” 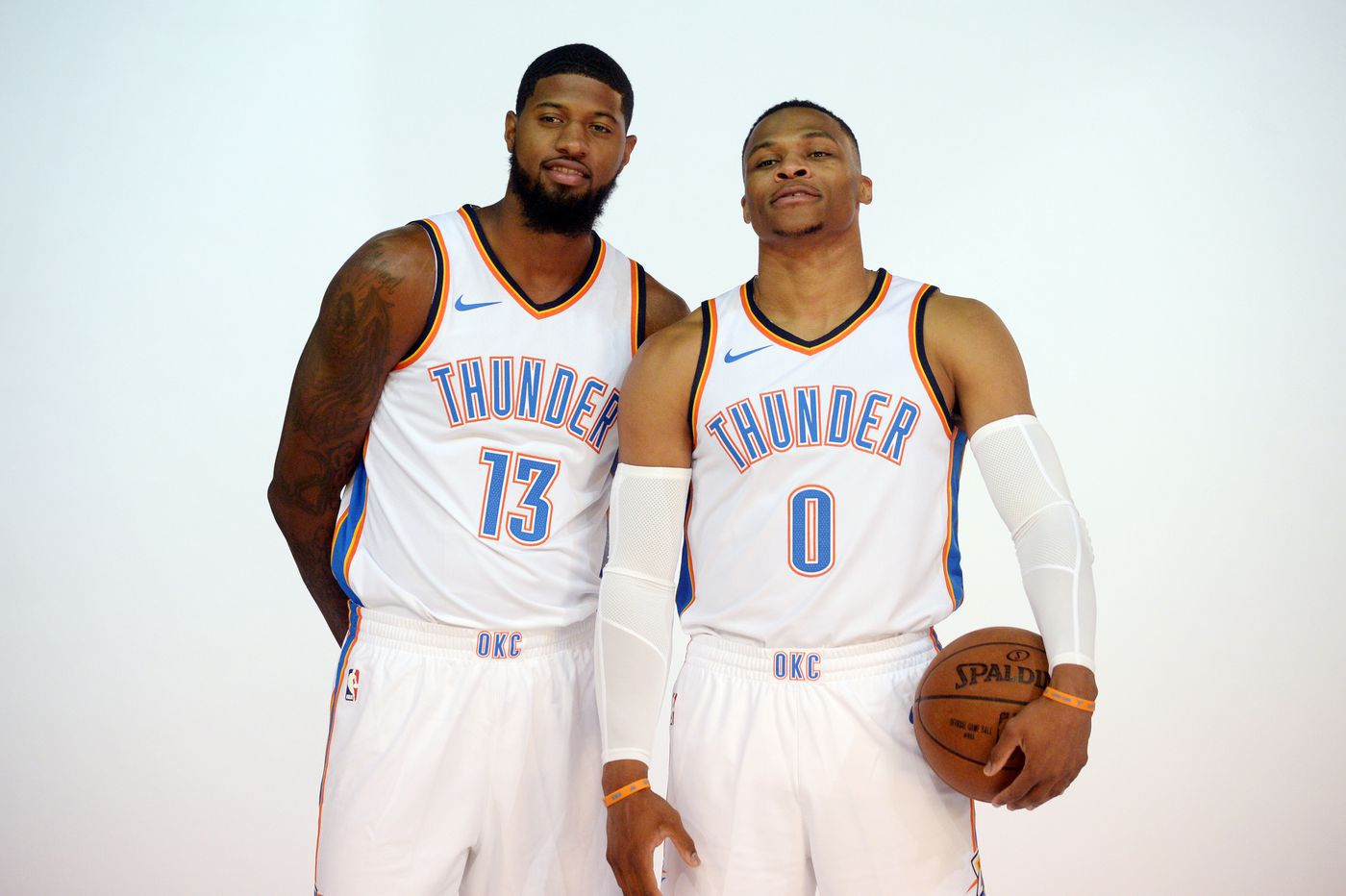 And then he blindsided the league twice to trade expendable parts for George and Anthony.

“As an idiot, I’m impressed,” center Steven Adams told me.

The George and Anthony trades were Presti’s third and fourth since Durant’s departure. The second came last February when the Chicago Bulls sought Cameron Payne, a low-upside prospect that they’ve reportedly already soured on. They dealt Taj Gibson, Doug McDermott, and their second-round pick to get him. For the Thunder, Gibson was the best player in the deal, McDermott the best prospect, and Chicago’s draft pick — with the team now committed to tanking — the best asset.

Fast forward six months. Frustrated that New York had resisted trade talks involving him for months, Anthony expanded his list of preferred destinations to include Oklahoma City. (Anthony’s no-trade clause limited where New York could deal him.) Those two spare assets from the Chicago trade, acquired by following the golden equation, brought Anthony to the Thunder in about 16 hours.

When you think about a place like Oklahoma City, you don’t associate it with these two players. George is a 27-year-old from Palmdale, Calif., and his contract expires next summer. Like most stars, he will have only one chance to freely decide where he wants to play during the prime of his career. Multiple reports from the summer suggest his priority is to sign with the Los Angeles Lakers. To go home.

(It should be noted that those reports came before George was traded to the Thunder, and on media day last month, he said that Oklahoma City has “already proven everything on my checklist [that] I can check off.”)

The 33-year-old Anthony is staring at a $28 million player option, but he may have his own incentives to leave. He was born in Brooklyn and lollygagged for years before committing to leave New York, as the big city had caught his heart. There’s also the Banana Boat factor; Anthony and longtime friends Chris Paul, Dwyane Wade, and LeBron James will be free agents together next summer for the first time.

George soured on Indiana’s culture, whatever it was, while New York and James Dolan are positively toxic. The Thunder easily passed the golden team building rule when acquiring George and Anthony. 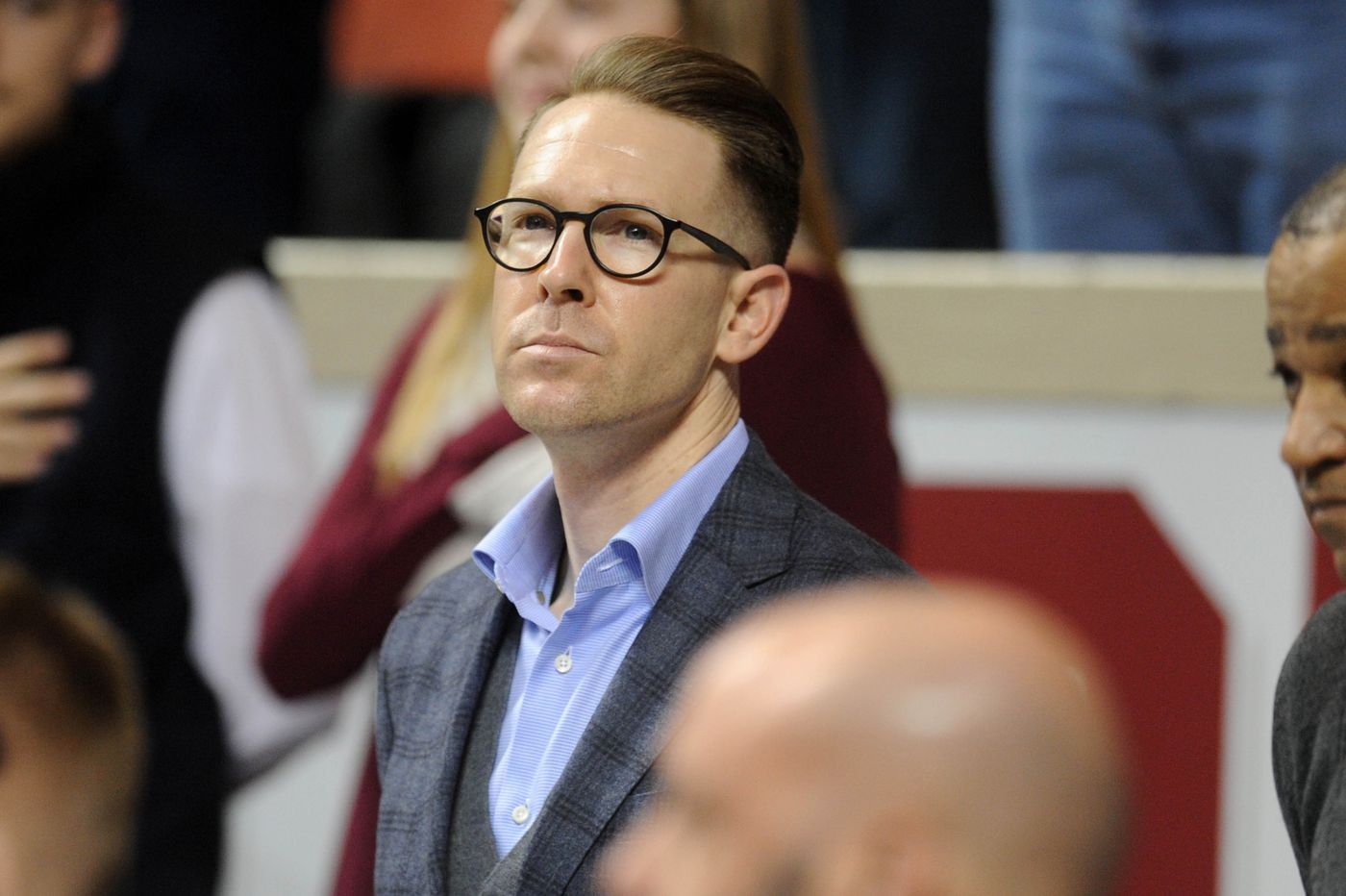 When the Thunder first arrived in Oklahoma City 10 years ago, Presti likened them to a Silicon Valley startup. He was young, just 30 when he arrived, as were the players. They were all angel investors getting involved on the ground floor.

That attitude was partly shaped by the franchise’s new city. The Thunder are Oklahoma’s first major sports franchise, and they’re the third-smallest television market. Instead of viewing these things as negatives, though, the organization has embraced the same plain, hard-working identity that the city prides itself on.

“The people are some of the nicest people I’ve ever met in the world,” said Adams, starting his fifth season with the Thunder. “When I first moved to my house after I got drafted, my neighbor was just making me loaves of bread. So I didn’t know what to do. I mean, obviously, you eat it, but I just like kept it, I had all these loaves of bread. And she just made them for me, which was really nice.”

Adams swears Thunder fans have a sixth sense for knowing when to show up at the airport, too. It’s a local tradition for diehards to stalk the team’s charter plane outside Will Rogers Airport at the end of a long road trip or when a marquee newcomer arrives.

“Kids, too, and it’s a school night,” Adams said. “They come out and do all sorts of stuff, and as an organization, obviously that rubs off on us.”

Neighbors and fans aside, Adams felt like the Thunder caught his attention even in pre-draft workouts because of their high standards for excellence — “more than any other organization I worked out for,” he says. It’s something that players around the league notice, too.

“When I first moved to my house after I got drafted, my neighbor was just making me loaves of bread.”

“I’m happy to be on the right side of it,” new arrival Raymond Felton said. “As a visitor, it’s different. Now being on the home side of it, it’s a wonderful feeling. I can’t even explain it.”

Felton has only been in Oklahoma City since July, but he swears that he’s already prepared to retire here.

This is the culture that the Thunder will pitch all year to the two basketball nomads, George and Anthony. Both wandered into the franchise to solve short-term goals, but may need more to commit on a longer basis.

Culture often grows to mirror the star player at the top, too. In Oklahoma City, there used to be a friendly debate that manifested into a jersey choice: Are you a 35 or a 0? A workhorse or a showman? Wear your emotions on your sleeve at all times, or choose to let your actions speak? Oklahomans weighed in with their jersey choices, but for years, they were two sides of the same coin. Both represented the same unifying church of basketball.

But in a single moment last June, two friendly sides became a single support group rallying around an enigmatic star. Westbrook was as much a therapist to grieving Thunder fans as he was an MVP last season.

Westbrook is the people’s champion in Oklahoma City, something that rings even truer after he signed a five-year, $205 million extension on Kevin Durant’s birthday earlier this month. Westbrook’s lensless glasses, zebra-striped boots, and sleeveless denim aren’t so representational of Oklahomans, or even the Thunder franchise, but the team has always valued his freedom of expression as long as he adheres to the core values.

“If he’s one to put his ego aside and still buy into what the whole organization’s dream is, or goal is, then obviously, that’s huge,” Adams said. “That’s the hardest thing to do, to make that guy buy into the bigger picture. Because it doesn’t happen often.”

Already, George and Anthony recognize that Oklahoma City stands out more than any previous stop. Just like the Thunder never legislated Westbrook’s snarling personality, they’ve already embraced Paul George’s love for fishing and Hoodie Melo. When fans met him at the airport, one guy even brought dozens of sleeveless hoodies to pass out among the waiting crowd.

It’d be impossible for George and Anthony to miss any of this.

By itself, the Thunder’s emphasis on culture isn’t unique. Of course every team wants to work hard and value their community. But how many franchises actually pay attention to the details like Oklahoma City? It’s no mistake that the Thunder were first in community appearances last season, according to an NBA tracking system.

They paid attention to the details 10 years ago, and they pay attention to them now. Way back in 2008, Presti was using the same lexicon he uses today. Consider Oklahoma City’s very first press conference in July 2008, when the Thunder had no superstars and no guidelines, when the team hadn’t even chosen its moniker and logo yet. Presti, hired by the Seattle Supersonics a year before, sounded the same then as he does today.

“We’re going to take the next steps for the vision of our team,” Presti said then. “We think this is just an unbelievable opportunity for our team.”

On media day last month, Presti had added a sharper haircut and designer glasses to his look, but nothing else to his message. “A summer like this, or opportunities like this, are really only ideas unless we’re given the opportunity to execute on those.”

In Presti’s lexicon, challenges aren’t challenges, but opportunities. It’s an opportunity to bring these three stars together and attempt to catch Golden State. It’s an opportunity to sell George and Anthony on team basketball where neither star overshadows the other, and on the greater culture around them. If they don’t, this team could certainly fall short of its potential and see it all break apart next summer.

That’s why, a few questions later, Presti says something with the confidence that comes from a culture trusted unconditionally, one that should outlive them all.

“The vision for our team and the way we’ve gone about our business has always been to see things for what they can be,” he said. “Not for what they are.”