The Champs Are Here: Nova’s on a mission to repeatby Andy Hutchins

Since 1973, when UCLA punctuated the height of its dynastic run under John Wooden with a seventh-straight NCAA Tournament title, only two teams have repeated as NCAA Tournament champions.

And given that UCLA played just four games in the 1973 NCAA Tournament (the event was a couple years away from a 32-team bracket), it’s fair to say that the feats accomplished by Duke in 1991 and 1992 and Florida in 2006 and 2007 stand alone in college basketball history.

This year, though, Villanova has a shot to add itself to the most rarefied air.

It might even have the best shot at repeating as any team since the Gators.

The 2015-16 Wildcats played one of the best NCAA Tournaments ever. Just two Villanova wins were decided by fewer than 19 points, and they came over top-five KenPom teams Kansas and North Carolina. Their other four victories were obliterations, none bigger than the 44-point Final Four win over red-hot Oklahoma.

But they were pretty good from November to mid-March, too. Among NCAA Tournament champions, Villanova posted the No. 6 Adjusted Efficiency Margin — a simple KenPom stat that measures the average margin of victory over 100 possessions — since 2001-02, at 32.01.

Only 2004-05 North Carolina, 2007-08 Kansas, 2009-10 Duke, 2011-12 Kentucky, and 2012-13 Louisville had bigger margins and won it all. That list includes three of the greatest college teams of the modern era, a North Carolina team that was a preseason No. 1, and the most unlikely national champions of Mike Krzyzewski’s career.

Moreover, Villanova was great in a year when no other team was quite on its level. Four teams finished 2014-15 with better efficiency margins than Villanova had a year later: Final Four participants Duke, Kentucky, and Wisconsin, plus Elite Eight loser Arizona. And there was a massive gulf between the Wildcats and the less impressive field: 2015-16 No. 2 North Carolina would have been No. 7 in 2014-15. 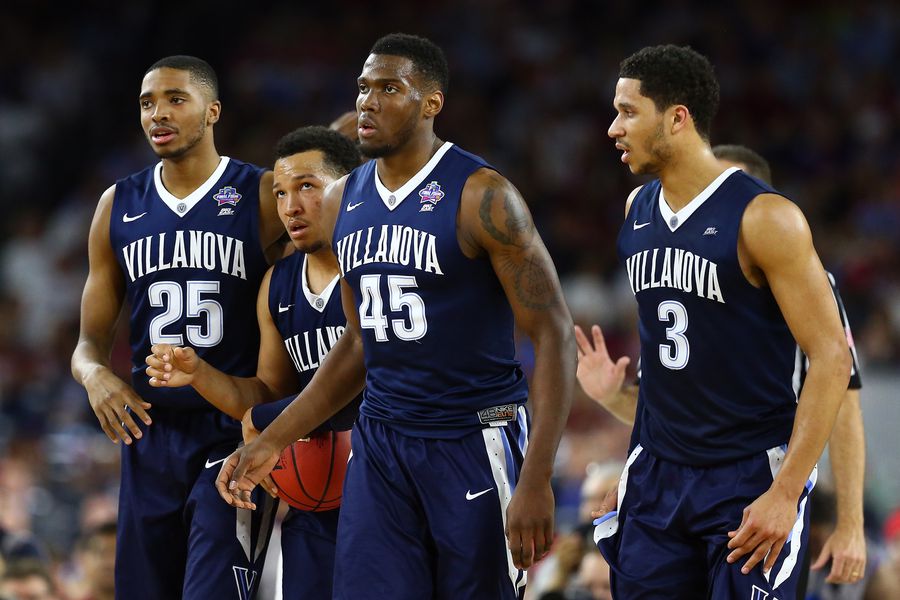 The five teams receiving first-place votes at the top of the preseason USA TODAY Coaches Poll — Duke, Kansas, Villanova, Kentucky, and Oregon — are a combination of the sport’s best-positioned blue bloods (Duke, Kansas, and Kentucky) and teams that can mix strong nuclei with promising newcomers.

Duke and Kentucky will both be developing arguably the best recruiting classes in the modern era, while Kansas adds No. 1 recruit Josh Jackson to a core that earned the top overall seed this spring.

Villanova and Oregon are the lower-rent version of Kansas: both teams have much of their 2015-16 rotations back and a rookie or two to add to the stew. The only Villanova players who played against North Carolina and aren’t on this year’s roster are Ryan Arcidiacono and Daniel Ochefu, and the Ducks’ only major departure was Elgin Cook. ’Nova’s Ochefu replacement should have been Omari Spellman, the No. 19 player in the 2016 recruiting class, but he’s ineligible, so the ’Cats will play returner Darryl Reynolds inside and turn to Dylan Painter as a fresh face who could be a presence in the post. Oregon netted point guard Payton Pritchard and forward M.J. Peak, both top-100 players.

Look further down the line, and there are other talented teams replacing more from their cores. North Carolina is entering a post-Marcus Paige era, Michigan State is Denzel Valentine-less, and Virginia no longer has Malcolm Brogdon or Anthony Gill.

And while Duke and Kentucky could certainly become great teams, so could Villanova.

This Villanova roster now has both experienced upperclassmen and seasoned top-tier recruits. Jalen Brunson, a four-star prospect in the 2015 class, is the Wildcats’ 2016-17 point guard after a year’s apprenticeship under Arcidiacono. He has the potential to be better than Jay Wright’s former floor general if he can cut down on the turnovers that plagued him during the year. Mikal Bridges might be Villanova’s breakout star after a redshirt year and a season spent as a seventh or eighth man.

Brunson and Bridges aren’t as highly touted as, say, Kentucky’s De’Aaron Fox, or Kansas’s Jackson, or Duke’s Harry Giles, but they’re still talented. Bridges is just outside the lottery in a 2018 mock draft from Draft Express, and was third nationally in two-point field goal percentage last season. Brunson, Villanova’s best recruit ever prior to Spellman, might be a better prospect if he were an inch or two taller.

And those two — and, y’know, Josh Hart and Kris Jenkins and Phil Booth and so forth — have an understanding of what it takes to win a title. What that’s worth is debatable, sure, and the recent agglomeration of one-and-done talent by coaches as disparate as John Calipari, Bill Self, and Krzyzewski is a fine argument that the best programs in college basketball are in the business of full-fledged reloading rather than reloading with a player or two or rebuilding. 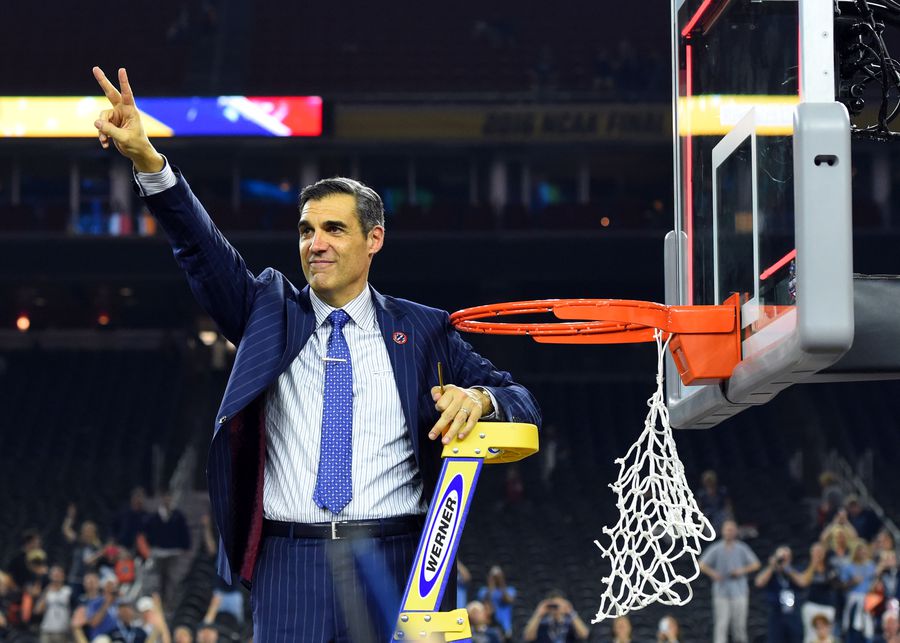 But the last two teams that repeated got there partly by dint of experience.

Duke played a brutal schedule in 1991-92, sprinkling road trips to LSU — which only had some guy named Shaq — and UCLA into its ACC slate. It also had Christian Laettner, both brilliant and reviled in his senior season, to team with Grant Hill and Bobby Hurley. They stayed No. 1 all year, racking up what was then the most wins by any Division I team in a season.

While the season did feature a customarily Duke-friendly road late in the year — the Blue Devils didn’t play a game outside of North Carolina in March until the Sweet Sixteen — those talented veterans helped Duke survive the classic Elite Eight matchup with Kentucky and a close Final Four game with Indiana, before stomping the far greener Fab Five to win it all. And there’s never been a better argument for how talent and experience can help a player than Laettner, who only made one of the best plays in NCAA Tournament history to cap the best individual performance in NCAA Tournament history.

Florida’s road to a repeat wasn’t so smooth, as the Gators lost three times in four games in February, each by double digits. But they also didn’t panic, and rallied to win their final 10 games by at least eight points each, sticking to the formula that proved unbeatable in March the year before.

The argument for experience ripening those Gators isn’t even about their repeat years. The Oh-Fours (Corey Brewer, Taurean Green, Al Horford, and Joakim Noah) were part of a recruiting class that was relatively lightly regarded at the time and sat behind an upperclassmen-laden roster that won the 2005 SEC Tournament, then lost early in the 2005 NCAA Tournament.

Bonded by that failure, those hyper-competitive Gators — Noah especially — forged themselves into better players and outdid first their highly regarded forebears, then every other team this century.

The correlation for Villanova isn’t perfect.

Jenkins may be back, but the man who dished the assist on his tourney-winning shot isn’t. Ochefu’s departure means an unproven post player will need to be good sooner rather than later. Spellman isn’t around to be a bench contributor like Marreese Speights was for those 2006-07 Gators.

The Wildcats, though, have leaders who have been there and more returning contributors than most aspiring repeaters. Since Florida’s back-to-back run, no champion has returned more of its rotation than Villanova. (Save maybe 2010-11 Duke, but its best and most important player was Kyrie Irving, a freshman.)

Villanova is not the favorite to win the 2017 NCAA Tournament, but it is a favorite. And given that most of the authors of the best NCAA Tournament run ever should have pens in hand come March, it would be unwise to bet against the Wildcats repeating themselves.

PreviousPredictions NextThe Year of the Freshman