The 5 Levels of Football Hell 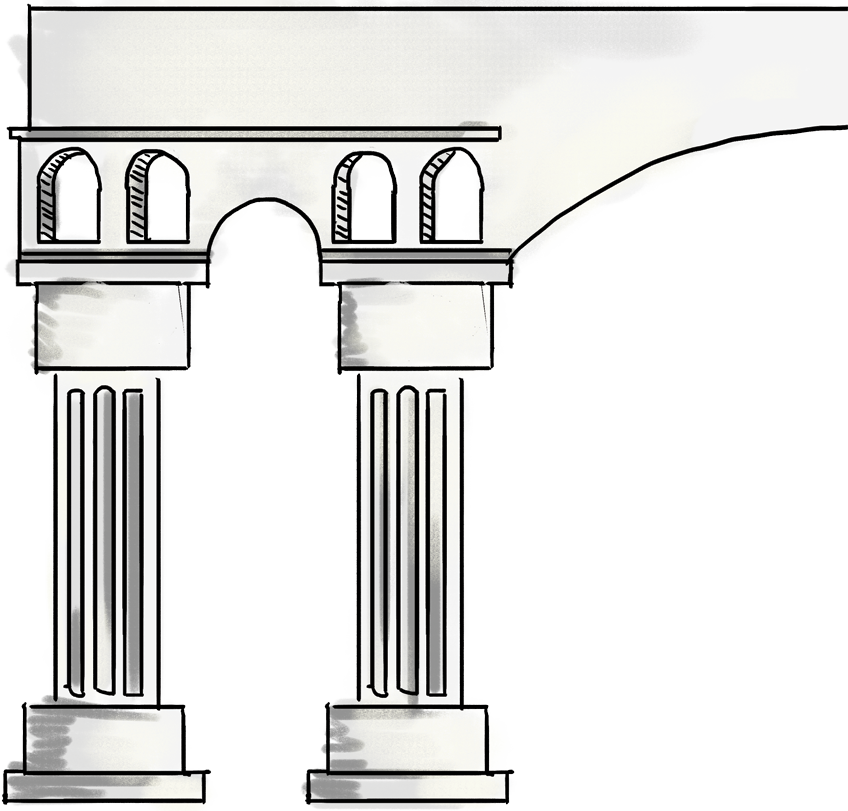 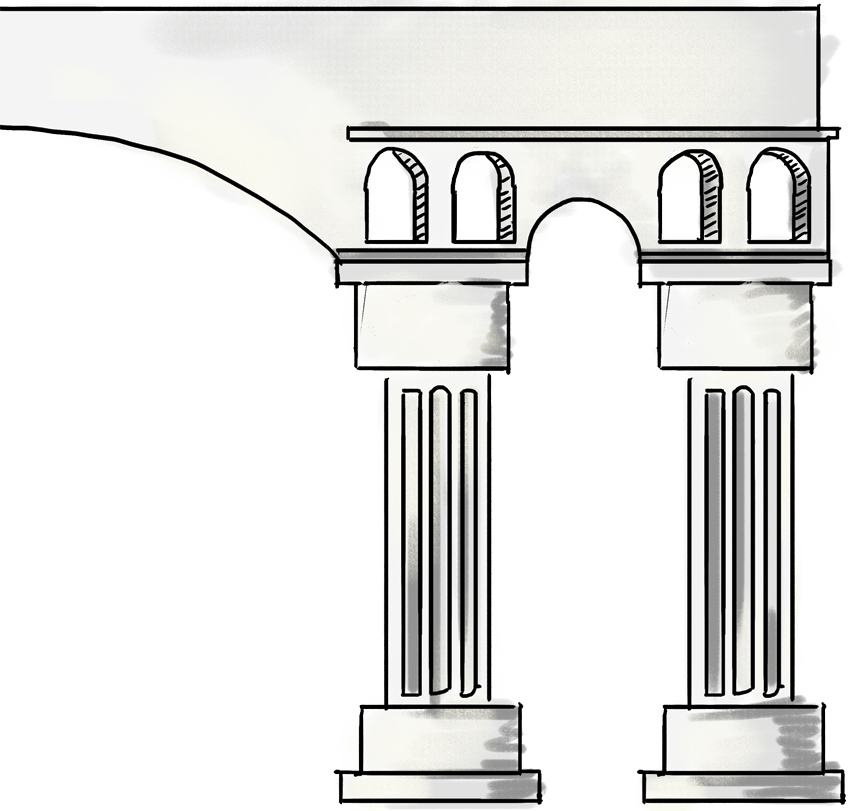 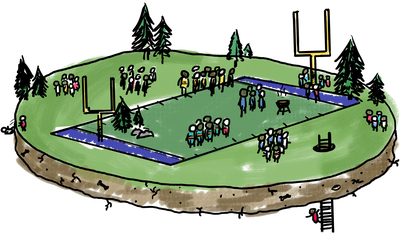 The Forest of Ramblers 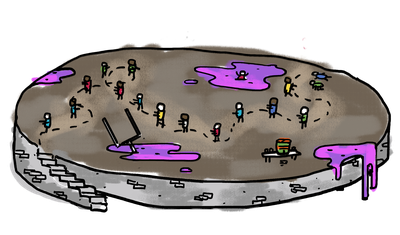 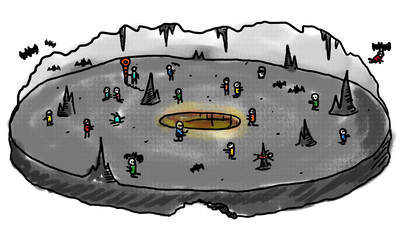 Cave of the Blind 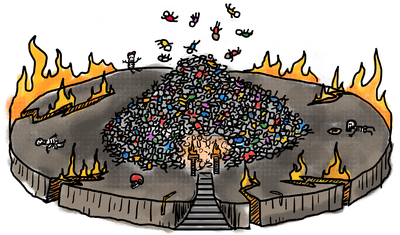 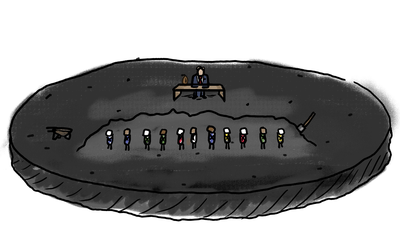 The language of sports is full of jargon used to signal inclusion. Being in on the dialect indicates expertise — being someone who lives in and understands traditions. Jargon can also act as a replacement for original thought and provides a way to anesthetize the speaker and their audience from the human realities and consequences of sports. The conversation around the NFL Draft demonstrates this power of jargon in shaping the idea of football and its athletes: We’ve begun looking at players and their bodies through the cliches and expressions they are confined to.

Terms like “elite,” “draft stock,” and “big board” are used by experts and fans to signal belonging. Players are reduced to ambiguous descriptors, like “gunslinger” and “winner.” More troublesome, this path of reduction and obscurement leads to whitewashing a history of domestic violence as “character concerns,” homosexuality dismissed as a “distraction,” and black athletes portrayed as monsters and brutes. “Freak” and “machine” are treated as endearing descriptions, and the suspicion that a black quarterback can’t “read a defense” tries to hide the racist idea that black people are not as smart as their white counterparts.

The banality of most jargon, in making sure to hide reality behind doublespeak, inevitably escalates to lightly coded bigotry. Jargon lets old prejudices and racist tropes run amok, disguised as sporting truths.

To help untangle these euphemisms, we created a glossary to decode NFL evaluations, separated by levels of nefariousness that even Dante would appreciate. And in that spirit, let us take you on a journey ...

Dante passes through the gateway to Hell, which bears an inscription, most frequently translated as, “Abandon all hope, ye who enter here.”

Dante and his guide hear the anguished screams of the Uncommitted. These are the souls of people who in life took no sides; the opportunists who were for neither good nor evil, but instead were merely concerned with themselves. 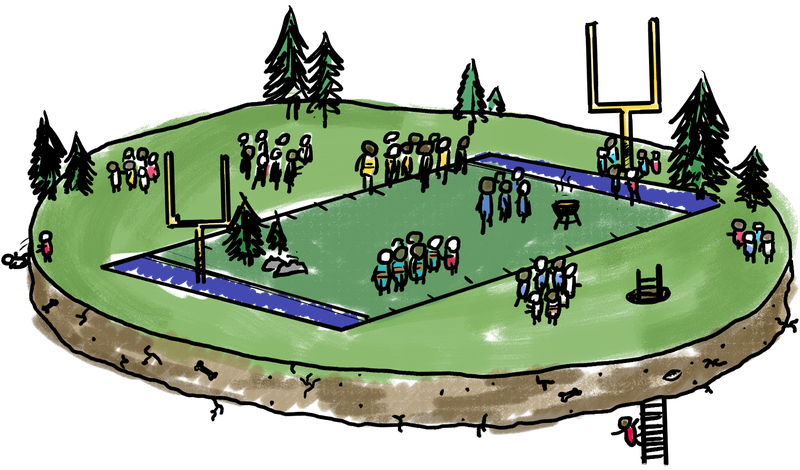 1The Forest of Ramblers

Those here spend most of their time using words that signal they are part of the greater NFL culture, and in turn, sacrifice individuality, clarity, and insight. They wander in circles, dazed, and talk amongst themselves.

Ancient source for writers that is summoned during draft season to spew CONVENTIONAL WISDOM.

The bright lights of New York City. Playing in BROADWAY can be too overwhelming for a DIVA but is perfect for a country boy with an “AW SHUCKS” DEMEANOR.

The external limit set by people who aren’t the player on how good the player can be. A player must spend his career justifying his CEILING.

What the NFL personality or writer believes. There’s a CONSENSUS that what they’re saying is true.

A quarterback needs to be tall and have big hands to succeed. That’s why Ryan Mallett is the best quarterback in the NFL.

The value of an athlete. Can be affected by the opinions of NFL personalities and writers.

A transcendent state in which there is neither suffering, desire, nor sense of self, and the subject is released from the effects of karma and the cycle of death and rebirth.

A real FOOTBALL PLAYER with high FOOTBALL IQ is someone who watches a lot of film. Does not refer to the movie “Concussion” or the documentary “League of Denial.”

The quality of being able to yell out inspirational quotes and cliches.

The state where a young adult can stand on the podium and assert that both teams played hard.

Qualities that can be seen and used to determine whether a player is a PURE PASSER, an ATHLETE or a PHYSICAL SPECIMEN. If a player displays a quality like TOUGHNESS, announcers are obligated to announce that you can’t measure that. Though CHARACTER supposedly can’t be measured, the ANONYMOUS source knows the CHARACTER of each player.

“World of Warcraft” for NFL experts.

One of the MEASURABLES usually reserved for defenders. The stamina for a player to persist after initially failing in his assignment.

A game in the Isle of Giants where individuals with great WONDERLIC scores protect the quarterback from NASTY brutes.

The rare ability of thinking before acting.

The distance between DRAFT STOCK and ELITE.

A position cumulated from all the MOCK DRAFTS.

Someone to be molded into a real FOOTBALL PLAYER.

A state of institutional purgatory. The Cleveland Browns are REBUILDING. 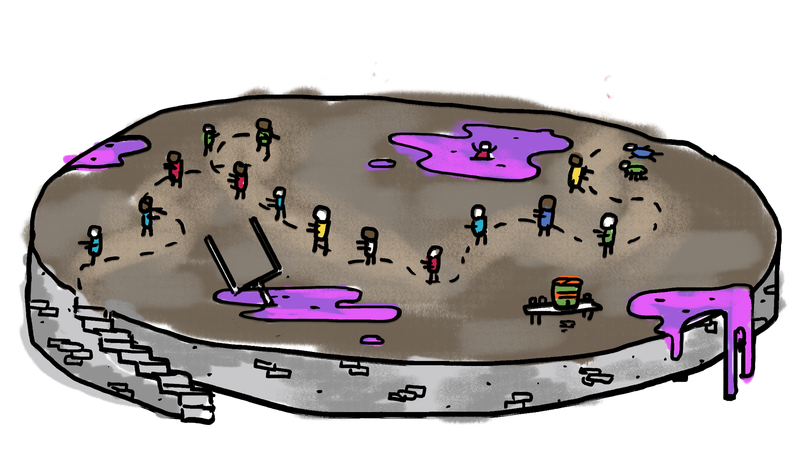 The path is marked by words that sound sweet and positive, but often hide the true danger and limitations of the athlete being discussed. Those on the path are trapped in a state of hypnosis, half-awake and half-dreaming the things they see.

Critical for a PROSPECT who wants to be able to throw several interceptions without feeling so bad that he can’t come back to throw another one.

Not as good as Ed Reed.

A refutation of probability theory.

A PROSPECT whose talent is rewarded being consigned to a REBUILDING team.

A stage where a player is denigrated in order to praise another.

A FOOTBALL PLAYER can be CONFIDENT. A DIVA is COCKY.

Useful in supplying footage for films like “Concussion” and “League of Denial.”

Someone in their early 20s who has yet to play in the NFL.

Contrary to popular belief, does not mean a player employed by the NFL, but a COMPETITOR whose interests start and end at football and football-related activities.

Exceptional natural ability. An adjective that can only be paired with the noun ATHLETE.

The Sargeras of MOCK DRAFTS.

Works extremely hard to be average.

The perfected state of being for a FOOTBALL PLAYER with an “AW SHUCKS” DEMEANOR.

The required attitude for an ENFORCER.

A player that’s barely able to justify his salary.

Not exceptionally great as a quarterback, but nothing else to compliment beyond the fact that the player can throw the ball.

Rounds out the 53-man roster.

Whatever the PATRIOTS decide a player is worth.

The quality to eventually be suitable for special teams. 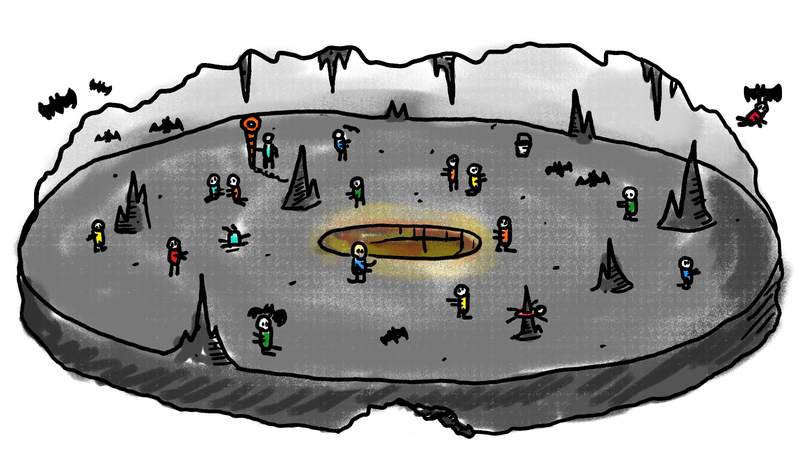 3Cave of the Blind

On the walls of the cave are expressions that those who refuse to leave use to interpret the outside world. Since the reality of the world is too harsh, they translate the little they do hear into ambiguous and comfortable language, whitewashing the true nature of events and people in the process.

A space where team officials can ask in-depth questions to understand players better, such as whether their mother is a PROSTITUTE or when the player lost his virginity. Typically followed by an apology from the league. Process repeats annually.

Watches a lot of FILM.

The ambiguous moral qualities of a player that can be determined by how badly a team wants to draft him.

Whether a player is a DIVA or has LEADERSHIP qualities.

Throws tantrums on the sidelines and yells at his offensive coordinator. Not a DIVA.

Always in danger of being lost from players encountering DISTRACTIONS.

A player has a CONTROVERSIAL past when he has been accused of DOMESTIC VIOLENCE or ASSAULT.

Things that might force the league to acknowledge and reckon with the outside world and their relation to it. HOMOSEXUALITY and protests are DISTRACTIONS. DOMESTIC VIOLENCE and ASSAULT are opportunities for second chances.

A player who takes a picture with his friends on a boat during the off-season.

FACE OF THE NFL

An exceptional player whose vocabulary entirely consists of NFL jargon.

If a SMART player disobeys orders and succeeds in helping the team, he has a HIGH IQ.

A player must decide whether he wants to be a HUMANITARIAN or a FOOTBALL PLAYER to show where his values lie. Unless he wants to win the Walter Payton NFL Man of the Year Award.

Mental qualities projected onto players by experts. Can shift depending on the expert’s personal feelings and biases.

An unholy land where DISTRACTIONS and CONTROVERSIAL issues serve to sabotage a player’s chance to fulfill their POTENTIAL.

What a player’s mother is believed to be. Question that must be asked during COMBINE INTERVIEWS.

Small knees and hands. Passing accuracy. That a quarterback may be too much of a GIFTED ATHLETE. A MAJOR CONCERN is usually expressed through ANONYMOUS sources.

Has a hard time holding their CONCENTRATION on football; can be too SMART for their own good.

If a player follows orders well, he is SMART. If he questions the reasoning behind the orders, he is too SMART for his own good.

Outdated test used to demean a PROSPECT. Does not reflect future NFL success. When the opportunity presents itself, make COMPARISONS between the scores of PURE PASSER Josh Allen (37) with the score of WIDE RECEIVER Lamar Jackson (13). 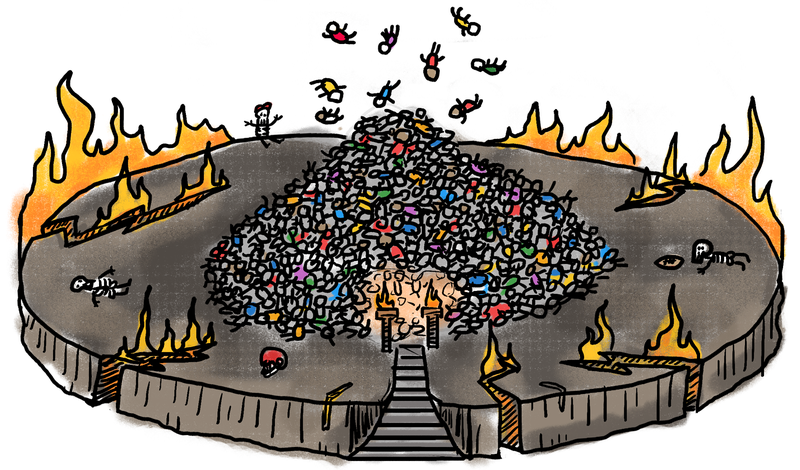 Here lie the husks of the players. Stripped of their humanity and complexity, they are nothing more than automatons waiting in service of Football. They are labeled accordingly to how big, fast, and strong they are.

Justin Ernest, who has the record of 51, played one season in the NFL.

Delusional. If a player is not good at his job, experts can remain BULLISH on his future if he has the IDEAL HEIGHT/WEIGHT, or is PROTOTYPICAL.

Where players with hundreds of hours of game tape are asked to run in a straight line and throw without pressure.

Prerequisite for becoming a MONSTER.

Critical for being PROTOTYPICAL or GIFTED. Helps to retain a job in the NFL despite on-field failures.

Impervious to pain and tiredness. Often requires a HIGH MOTOR.

Biological qualities of a player that assure he is EXPLOSIVE and of EXCEPTIONAL SIZE.

Has the MEASURABLES of a FOOTBALL PLAYER. Nothing else required.

Lacks FOOTBALL IQ but is a GIFTED ATHLETE.

The immeasurable ability to play through pain.

A SHIFTY player is WORKMANLIKE if he has the TOUGHNESS to repeatedly take heavy hits from defenders. 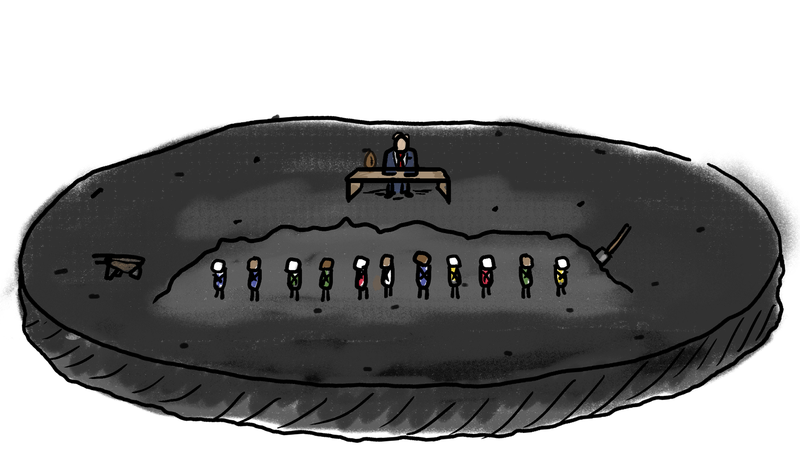 The words here are used by those who commit the ultimate sin of reducing fellow people into something less than human. In denying the complexity of players, disregarding the relation of the NFL to the history of the outside world, following the path of speaking in backhanded compliments and signaling by using imprecise language, they find themselves expressing cruel and ancient prejudices while trying to hide under several layers of jargon.

A human being considered chiefly as physical or non-rational. One of the few ways to compliment a black ATHLETE. Other compliments include BEAST, FREAK, MACHINE, MONSTER and PHYSICAL SPECIMEN.

Can lower DRAFT STOCK, pushing the player to be drafted in the second round, rather than the first. No indication of a player’s CHARACTER.

A lower animal as distinguished from a human being. One of the few ways to compliment a black ATHLETE.

Television personality, entertainer. Concerned about Deshaun Watson’s capacity to learn, and a MAJOR CONCERN that Lamar Jackson is too much of an ATHLETE to play quarterback.

A player lacks CLASS if he refuses to answer questions after losing. Unless that player is Tom Brady, because he’s just a COMPETITOR.

CONTROVERSY that surrounds a player before he is signed to the Cowboys. Video evidence required to trigger suspension.

A person or animal having a physical oddity and appearing in a circus sideshow. One of the few ways to compliment a black ATHLETE.

A CONCERN when being drafted, a DISTRACTION when the player is in the league.

An imaginary creature that is typically large, ugly, and frightening.

A black quarterback’s true position, since he is very skilled and needs the ball in his hands as much as possible, just not at the quarterback position.

Can only be cared about when the man speaking has a wife or a daughter. Only exist in the month of October.