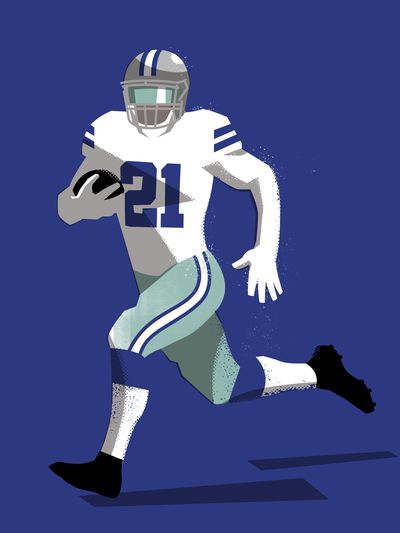 There are a lot of people who will be shocked by this, but the answer isn’t Ezekiel Elliott. While the Cowboys certainly have a lot of very talented players, there’s no question the heart and soul is quarterback Dak Prescott. He carries the ability to lift others up around him. As cliched as it sounds, there is a universal agreement throughout the locker room that the unquestioned leader is No. 4.

The Cowboys don’t necessarily have anyone who’s constantly blowing up Instagram with how often they’re lifting and running, but you don’t need to see the process to know exactly how much work left tackle Tyron Smith is putting in. He is so jacked that he had to put a knee brace on his elbow. A knee brace!

The biggest weakness for the Cowboys entering the season is offensive coordinator Kellen Moore. There are reasons to be excited about Moore, but at the end of the day we’re talking about a first-year offensive coordinator and just a second-year coach overall. Three years ago, he got beat out for a starting role by the top two quarterbacks on the team’s roster. How will he fare in year one? Will he be the creative mastermind that unlocks the offense in a way Scott Linehan couldn’t? If he can’t, things could get bad fast.

Blogging the Boys prediction: 10-6 The Heart | by RJ Ochoa

Various oddsmakers have put the over/under for the Cowboys at 9.5, and that’s caused me to lose sleep at night. They’re so close to that point that you can justify barely over and under. The 2018 Cowboys squeaked out wins against the Lions, Falcons, and Eagles, and football is such an unpredictable game that you don’t know how those coin-toss games will go in a given year. I lean 10-6, but it’s going to be a wild ride. That’s the Cowboys way.

I’m high on the Cowboys, but this sounds right. They return Travis Frederick to anchor their outstanding offensive line. Randall Cobb was an underrated signing at receiver. Jason Witten is back. It feels as though their defense was vastly underappreciated, but it’s legit. The question mark for me is Dak Prescott. Can he become elite?

For more on the Cowboys, check out Blogging the Boys