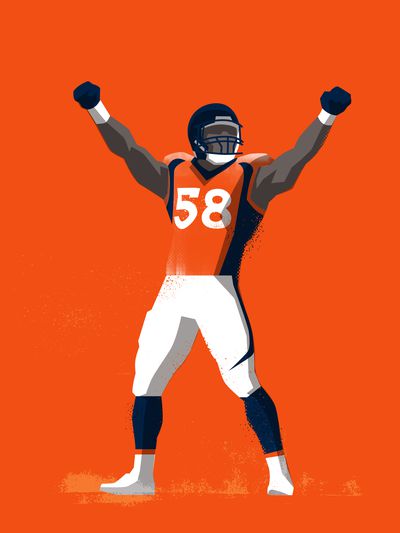 Phillip Lindsay. The cornerstone of the team is obviously Von Miller, but if there is one player who sparks the right kind of desire and attitude on the team, it’s last year’s undrafted rookie sensation. He’ll be one of the smallest guys on the field every single week, but his tenacity makes him one of the most dangerous players on it.

Emmanuel Sanders. After seeing his 2018 season ended by an Achilles injury, no one expected him to be ready to go just 10 months later. Yet he has rehabbed to the point where he played in the preseason and the team expects him to be a full go for Week 1 against the Oakland Raiders. That’s pretty impressive for a 32-year-old wide receiver and a testament to his work ethic and dedication.

Tight end. The Broncos drafted Noah Fant in the first round this year, but like most rookie tight ends, we shouldn’t expect him to be a major factor in his first season. That leaves veteran Jeff Heuerman to carry the load on offense. He would be considered solid depth at the position, but as a starter he will not provide enough stress on opposing defenses to open things up in that area for Joe Flacco and the offense.

This team will only be as good as Joe Flacco is. However, their defense is going to be elite and should keep the Broncos in a lot of games. With the second-toughest strength of schedule in the NFL this year, it will be a long, hard road back to contention for Denver.

Especially in a strong division like the AFC West, this is about two wins too high. Joe Flacco has been a below-average quarterback for a few years now. The defense will be improved with Vic Fangio at the helm, but that won’t be enough. As it currently stands, the Broncos would only be favored in five games, mostly by less than a field goal.

For more on the Broncos, check out Mile High Report