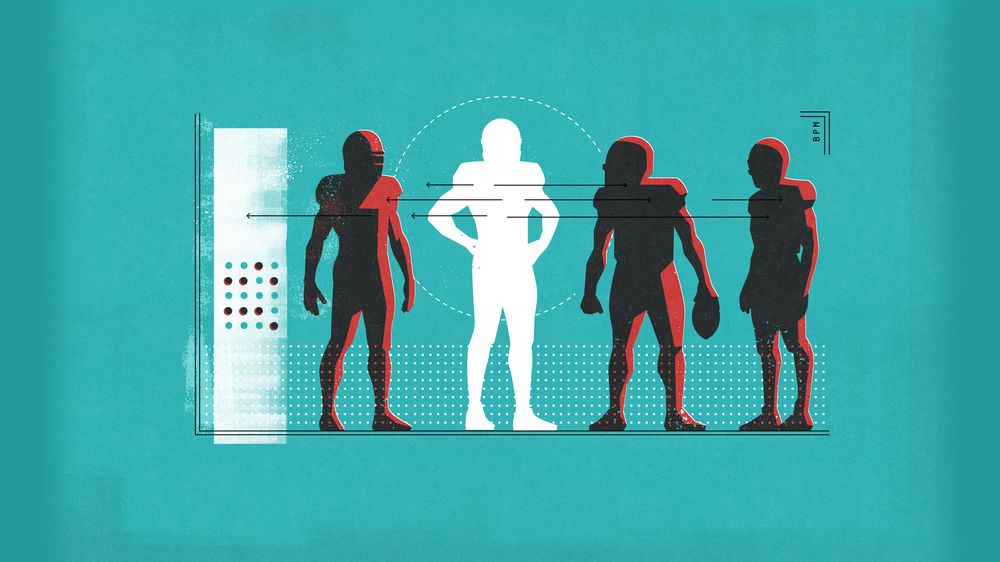 There are 53 men on an NFL roster and a handful of coaches there to make them great. Many of these players and mentors are interchangeable — standard-issue gears in a machine. Some are custom-made parts that take weeks, months, or years to fix.

And a very rare class are the engine that brings the rest of the machinery to life.

Each franchise has one man who stands nigh irreplaceable as its heart and soul. He’s the turbine that drives power through the rest of the roster, ensuring everything else works in concert. This can be a quarterback, a pass rusher, an ever-evolving playcaller; anyone who takes up the most ink in the playbook or in opponents’ midweek planning sessions.

Some of these players and coaches are easy to identify. The Packers have fallen to pieces without Aaron Rodgers in the lineup. Losing Khalil Mack would strip the Bears of the player who made a good defense the league’s stingiest. Take Sean McVay away from the Rams and they’d suddenly look like just another Jeff Fisher offense.

Others may materialize from the ether to lead their teams. Russell Wilson wasn’t supposed to start his rookie season behind center in Seattle, but he’s since developed into the fuel that keeps the Seahawks chugging past a rebuild. George Kittle went from a fifth-round rookie in 2017 to one of the few reasons to watch the 49ers in 2018. Dak Prescott was a third-string afterthought who led the Cowboys to the NFC’s best record in his first season as a pro.

There are eight categories in which these driving forces fall. If we look at examples for the coming season, where does your team fit in?

This is typically a quarterback, though it can occasionally be a drive-stopping defensive powerhouse, dual-threat tailback, or, in the rarest of instances, the 1987 version of Jerry Rice.

If this life-giving force is a passer, he’s the aerial wizard who backs safeties out of the box for his running backs to thrive. He’s able to audible out of danger and make the most of every slight opportunity an opponent provides. The dropoff from starter to backup is the difference between playoff contention and earning a top-10 draft pick.

If not a quarterback, he’s a game-changing presence able to lift his team with a monster performance — like Marshawn Lynch’s “Beast Quake” run for the Seahawks in the playoffs. Pace-setting defenders who may not get their share of highlight-reel footage but undoubtedly make their teams better can also fit the bill.

The rarest fruit in the bunch. These are the guys who can turn a game on its side with one simple, inexplicable play. A left-handed throw from a right-handed Patrick Mahomes? That counts. A Hail Mary that nearly slips the surly bounds of our atmosphere? This is where you belong, Aaron Rodgers.

This also applies to the occasional defender — think Justin Smith pushing a left tackle 10 yards backward and bringing Drew Brees down by his collar with a 300-pound man directly between them, or many of Aaron Donald’s pocket-crumpling sacks.

This is the player who gets it done on the field, in the locker room, and off the field. He understands exactly how good he is and exactly what that means to his team. He roasts opposing quarterbacks on the field every Sunday and then on Twitter the rest of the week. He is his own biggest fan, which is saying something because he’s got plenty of admirers.

The hype man is brash and occasionally the object of sports radio scorn, but he’s not wrong. Non-fans will accuse him of being a distraction, but his teammates know what he brings to the table. He feeds off boos, hate, and slights both real and imagined … which is great, because he’s gonna get plenty of them from September through February.

These are the guys who don’t put their names out there — they let TV analysts handle that heavy lifting instead. They make headlines with their play and the occasional record-setting contract extension.

You won’t hear them call out opponents. Instead, they leave their talking to the huddle. Their past results carry a tremendous amount of respect among teammates and opponents alike.

This player will be named a team captain and get lauded by coaches every week. They’re the ones who set the tone on and off the field. They’re loved by their hometown fans and begrudgingly respected by rivals.

These are the defensive players who can rewrite the NFL’s record books thanks to their ability to toss opposing blockers aside like discarded Big Mac boxes. They are the edge rushers capable of a 20-sack season or the interior linemen who warg between pocket-crumpling asteroid and tailback-swallowing black hole.

This can also include less-heralded inside linebackers who have a hand in seemingly every play, going from sideline to sideline to cut off running lanes. Then there’s the blindside protector who acts as a brick wall from the other side of the line.

This typically doesn’t include cornerbacks, but could cover an explosive dual-threat safety under the right circumstances — think peak Earl Thomas. A dominant offensive lineman, like Orlando Pace in his prime, can also qualify.

You didn’t know these guys were the heart of your team until somewhere around Week 8. Sure, they had potential, but now they look like they were poured into the foundation of the franchise. It can be a first-round pick rounding into form, an undrafted free agent shining in his opportunity to grace the big stage, or an underwhelming veteran who’d been granted a change of scenery.

In years past, this group has included midseason replacement quarterbacks like Jimmy Garoppolo and Baker Mayfield. It landed on Darius Leonard in 2018 when the Colts’ defense was in desperate need of a do-it-all playmaker. Those players have aged their way into other categories, and now it could be one of these candidates this fall — or, more likely, someone we weren’t really thinking of.

An inspiring category that’s sometimes worth celebrating and occasionally depressing. These are the 30+ year old players finishing out the end of potential Hall of Fame careers. Their output may not be what it used to be, but they still have a place in the league — and they’re dying to prove they have more to offer than just replacement-level performances.

The outcomes here are a mixed bag. John Elway won a Super Bowl in his final NFL game, but Brett Favre’s final postseason pass was a backbreaking interception. Sometimes you get both sides of the coin with the same player; Jerome Bettis averaged only 3.3 yards per carry in his final season, but also walked away with a Super Bowl victory in his hometown.

The Patriots were an AFC also-ran without a Lombardi Trophy to call their own before Bill Belichick showed up. The Rams were the shining example of Jeff Fisher’s 7-9 BS until Sean McVay threw his wunderkind brain at the team’s playbook. Jon Gruden took an underwhelming Raiders team and turned them into something … well, completely different, even if we’re not sure how it will all work out.

These coaches take high-ceiling prospects and turn them into stars, all the while leaving an indelible impact on their franchise. They oversee massive turnover and overcome losses by identifying the veterans and college stars who can turn their vision to reality. Something about your team just feels different when they’re on the sideline — even if that’s not always a positive.

The comeback of the dark visor?
The running back's burden
The Air Raid is here
How I chose my jersey number
Kicking is a science
Home Page