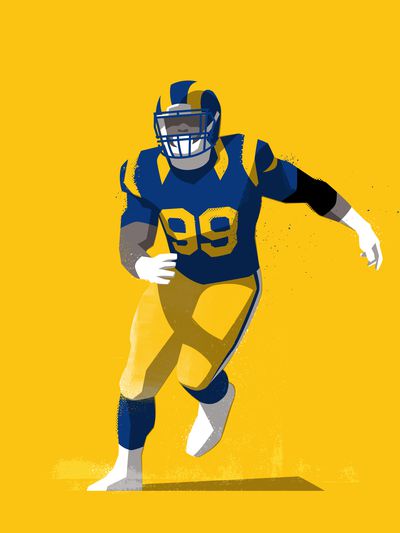 The true answer is head coach Sean McVay. His arrival in 2017 and the subsequent culture change was perhaps more important than what has happened on the field over the last two seasons. DL Michael Brockers was asked last year when the Rams started 8-0 what their record would be if Jeff Fisher were still the head coach. While most outlets picked up on his answer being 7-9, what was more relevant was his explanation for his answer and the sincerity of the values McVay has brought to the team.

Attention. Between that epic Monday night war against the Chiefs, Sean McVay getting outcoached by Bill Belichick in the Super Bowl, and Jared Goff being everyone’s favorite system quarterback, the Rams are relevant for the first time in a decade and a half. Nobody will take them for granted. Nobody’s just expecting to show up and get a W in Los Angeles. The Rams are a statement game for every single one of their opponents. Panthers fans know it. Saints fans know it. Browns fans know it. Buccaneers fans know it. And that’s just the first four weeks!

There are some issues with the defense that will be hard for Wade Phillips to paper over, and every team is going to come with their A-game against the Rams. Still, there’s so much talent returning from a team that offered one of the best offenses in the NFL, started 8-0, finished 13-3, and went to the Super Bowl. While the Rams’ Super Bowl performance left a bitter taste in everyone’s mouth over the offseason, Week 1 is gonna wash it out immediately as a thing of the past.

11-5 looks good to me. I’m glad this number didn’t go overboard after the Rams made the Super Bowl last season. I think the Super Bowl hangover is a real concern. The Rams’ offensive line has some question marks, too. Then on defense, outside of Aaron Donald, where are they getting a pass rush? Their pass defense should still be excellent, though.

For more on the Rams, check out Turf Show Times