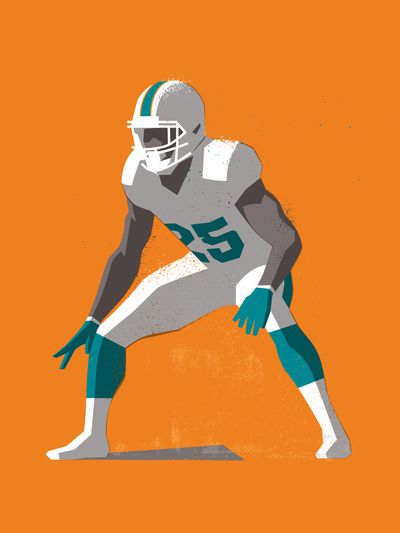 That is tough right now, as the Dolphins are going through a rebuild. Cameron Wake used to be an easy answer, but he’s now a Titan and the Dolphins have a bunch of younger players looking to prove themselves. Over the next few years, players like Xavien Howard, Minkah Fitzpatrick, and Christian Wilkins will probably take on that role, and you could probably argue it’s already Howard. Instead, let’s say head coach Brian Flores for now. He is clearly establishing the Dolphins as his team. It feels different around the franchise in 2019.

Linebacker Jerome Baker came back to Miami this year looking bigger, stronger, and faster. He is up about 12 pounds from last year’s playing weight and has established himself as the team’s defensive playcaller and primary linebacker. He has been impressive so far, and his workout ethic is clearly setting him up for a big second year.

Depth. That probably should be expected from a team that is in an obvious rebuild and has shed many higher-priced, older veterans. That leads to younger players being forced into starting roles without a lot behind them. The wide receiver group has several talented players, so they are set. It’s a concern everywhere else, though, and for a team that has been injury-plagued the last few years, that’s extremely worrisome.

The Phinsider prediction: 6-10 The Heart | by Kevin Nogle

I feel like the Dolphins are better than people realize. They were destroyed by injuries last year, so some of the issues analysts are hung up on is player attrition. Even so, I think retaining players like Albert Wilson and Jakeem Grant helps the wide receivers, even if free agents were not added. I am not trying to say this will be a team competing for the playoffs, but I think they are a little better than the experts say. I could see anywhere from 3-13 to 7-9, but 6-10 feels right.

This might be just right, but I lean too high. Either they’re playing Ryan Fitzpatrick, who’s 7-14 over his last three seasons when starting. Or it’s Josh Rosen, who is starting over with a new team in just his second year. Plus, the OL is shaky, and there’s a new coach. And who knows, they could also be tanking for Tua Tagovailoa.

For more on the Dolphins, check out The Phinsider