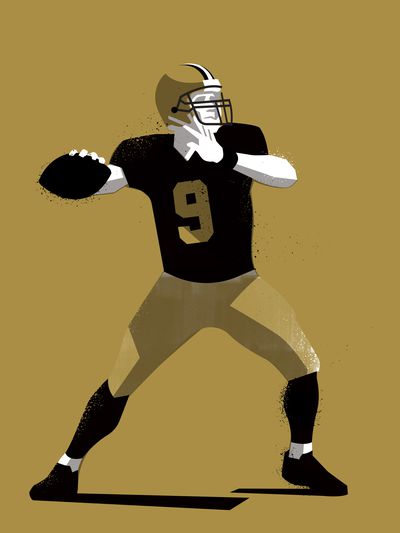 Without question, it’s Drew Brees. The city of New Orleans has fallen in love with Brees and his family. He’s established himself within the community and then some. Throughout his tenure with the Saints, whether the team has had successes or failures, Brees has always been a positive presence. He’s one of those players who deserves the pomp and circumstance for a key to the city, and if he ever chose politics in Louisiana after he eventually hangs up his cleats, he’d be a shoo-in to win.

Many know about Alvin Kamara for some of his balancing act skills during the offseason, but I’d give the nod to Thomas Morstead, the team’s punter. Any time one of your freakishly crazy workouts spurns a randomized drug test from the NFL, that’s a win. Morstead is one of the best at his position, and is showing no signs of slowing down. He uses his kids as weights. No, seriously.

Everyone saw what happened to the Saints in the NFC Championship Game. The Saints have had a tortured past with their exits from the postseason in the past decade, but you have to give them some credit for coming back from The Minneapolis Miracle the way they did when they could have suffered a massive hangover. One would expect similar claims for 2019 after the infamous “no-call,” but this is a team that is simply strong and competitive from top to bottom.

The Saints will be tested out of the gate early in September, facing four playoff teams from 2018 (Texans, Rams, Seahawks, and Cowboys). Getting off to a strong start will be a point of emphasis, and that Week 2 matchup in Los Angeles will surely attract all of the headlines. This New Orleans team has proven that it can compete, and there should be little to no dropoff from last season. I expect stiffer competition from the NFC South, but still think the Saints come out on top with an 11-5 record.

I think 11 wins feels right. I know there’s been chatter about Drew Brees and his arm strength lately. I do think there’s something to the idea that his age is getting the best of him. The offense’s production numbers were way down to end last season. However, it’s Brees and Sean Payton — the Saints will be fine on offense, even in a stacked division.

For more on the Saints, check out Canal Street Chronicles