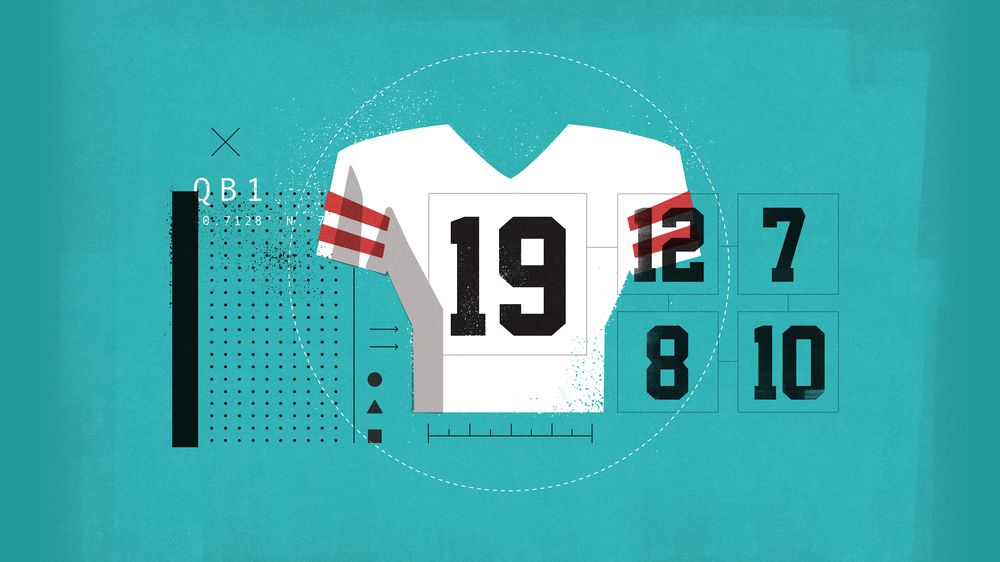 How I chose my jersey number, as told by current and former NFL players

It’s easy to focus on the aesthetics of jersey numbers in the NFL. Some numbers just look good on full display, and some numbers fit certain positions better than others.

What gets lost, though, are the origins and personal attachments to each jersey number. Not every player has a deep connection with the number on his back, but there’s always a backstory to how it was chosen in the first place.

Jersey numbers may not be the most important component of a football career, but they end up becoming a piece of the player who wears them.

To get a little more insight into the process of choosing a jersey, we sat down with six current and former NFL players to hear the stories behind their numbers.

Vernon Davis grabbed No. 85 and kept it moving

In his 14 years in the league, the only time Washington tight end Vernon Davis hasn’t worn No. 85 was when he was traded to the Broncos halfway through the 2015 season (Virgil Green already had No. 85 on lockdown). But the jersey number Davis has had for the majority of his NFL career doesn’t have a significant meaning behind it.

“I just grabbed No. 85 when I was a rookie [with the 49ers] and stuck with it,” Davis said in an interview with SB Nation. “When I came to Washington, I decided to go to back to it just because I’ve always worn it.”

However, Davis did say there was a minor reason he selected the No. 18 he wore in college at the University of Maryland.

“I wore 18 at Maryland because that’s how old I was when I decided to go there,” Davis said with a laugh.

Tight ends in the NFL are only allowed to wear numbers in the 40s and the 80s, so Davis wasn’t able to wear No. 18 as a professional. The 35-year-old Davis just needs to keep playing 50 more years for his age to match his jersey again.

Darwin Thompson received a blessing to wear No. 25 for the Chiefs

Sentimentalism can be another reason why a player chooses a specific number. That’s the case for Chiefs rookie running back Darwin Thompson, who has a special bond woven into his No. 25 jersey.

Jamaal Charles wore that same number for nine seasons in Kansas City, where he racked up 7,260 rushing yards, 2,457 receiving yards, and 63 total touchdowns. He’s the franchise’s all-time leader in rushing yards and ranks fourth in the NFL in yards per carry. Needless to say, he’s a Chiefs legend.

Thompson met Charles during a pre-draft visit with the team and started to form a relationship that would allow him to ask Charles for the jersey number.

“I look at my life as God’s plan. I came on a top-30 visit here, and I got to meet Jamaal Charles. He was actually coming back to talk about his retirement and how he wanted to do the one-day retirement thing,” Thompson said.

Charles officially retired with a one-day contract on May 1, just four days after Thompson was drafted by Kansas City.

“So when I wanted the number, I texted him,” Thompson recalled. “I just wanted to ask him, ‘You just retired. You really the GOAT. I grew up watching you at [the University of] Texas, and now Kansas City. I wanted to know if it was OK I wore it.’”

It was a matter of reverence for what Charles accomplished in his career — and what Thompson plans to accomplish in his own career.

“He put up damage behind that number. So it was a respect thing,” Thompson explained. “He said it was cool. He was glad I got to be in a system with Andy Reid and how much of a better player Andy Reid was going to make me just within his offense. And so he was happy for me, really. And it was just crazy, because I was like, ‘Man I just met you three days ago. Now I’m wearing your number.’

Thompson has a long way to go to match Charles’ career, but he looks poised to be a contributor for the Chiefs right away.

Hardy Nickerson Jr. shares the same No. 56 jersey as his father

The Bengals have the son of an NFL great playing on their defense. Hardy Nickerson Jr. dons the same No. 56 jersey that his father did while he was dominating the league in the 90s and early 2000s. Hardy Nickerson Sr. was a five-time Pro Bowler and a four-time All-Pro linebacker as a member of the Steelers, Buccaneers, Jaguars, and Packers.

Nickerson Sr. told SB Nation that he wore No. 56 in high school and wanted to wear that number in the NFL. He was given No. 54 when he was drafted by the Steelers in 1987, but reverted back to No. 56 after signing with Tampa Bay in 1993.

Nickerson Jr. didn’t intend to pick No. 56 in honor of his father; it just happened to be available. “I just grabbed it because it was a cool linebacker number,” Nickerson Jr. said. “It was a coincidence that I ended up with the same number as my dad.”

Nickerson Jr. has been a staple in the Bengals’ linebacker rotation since joining the team in 2017 as an undrafted free agent. Over the last two seasons, he’s logged 676 defensive snaps for the Bengals. He may not have reached the peaks his father did, but he’s doing his father’s number proud.

Stephen White wore No. 94 in the NFL after being burdened with No. 64 in college

SB Nation’s own Stephen White has a colorful history with his jersey number. It all started at the University of Tennessee, where he didn’t have much of a choice with his initial jersey.

“Well, I get to Tennessee and I was by far the lowest-ranked recruit in out class — I got there in ‘91 with Heath Shuler after all. Every other dude’s high school bio is pages long; mine was a paragraph. So, somehow I end up with No. 64,” White said.

As we all know, defensive linemen should not be wearing jersey numbers in the 60s.

“Evidently, there was some old-time great Vol linebacker who wore [No. 64] in, like, the ‘30s. It sounded like some bullshit from day one, but hey, I know as much as anybody that at that point, I’m lowest man on the totem pole,” White recounted. “So, I figured I’d wait until I was actually contributing to ask for a number change.”

By the time White was a junior, he was starting for the Volunteers but still wearing that unsightly No. 64 jersey. He tried to change his number throughout his college career, to no avail.

“[Sophomore] year I ask to change to 45. Nope. They had already promised a recruit that number. Like the year after that, I think I asked for 56 and [was] denied again in favor of a recruit. Junior year, I’m a starter and put up a decent year, so by my senior year I was like fuck it — No. 64 it is. I mean I rocked it, but the shit just looked awkward no matter how well I played.”

White said when he got his No. 94 jersey with the Buccaneers in 1996, he was much happier. Look good, feel good, play good.

Corey Davis thought his No. 84 jersey was a joke at first

Corey Davis doesn’t have a grandiose story about how he chose the No. 84 he wears as a wide receiver for the Tennessee Titans. He thought it was a prank at first when it was just assigned to him at Western Michigan.

“Honestly, when I got to college, that’s the number they had for me,” Davis said in an interview with SB Nation. “My brother is two years older than me [and] he went to Central Michigan. I kind of thought they did it [on purpose] because he had the same number too. So, we kind of just stuck with it and made it ours.”

Davis’ older brother, Titus Davis, last played in 2017 for the Chicago Bears and wore No. 84 for Western Michigan‘s biggest rival. It’s easy to see how Corey Davis thought the WMU staff might have been trolling him at first.

Corey Davis has had a ton of success in his jersey, at least. He became the fifth overall pick in the 2017 NFL Draft, making him the highest drafted player ever out of Western Michigan. It goes to show that sometimes you don’t pick the jersey; the jersey picks you.

The comeback of the dark visor?
The running back's burden
The Air Raid is here
The heart of your team
Kicking is a science
Home Page