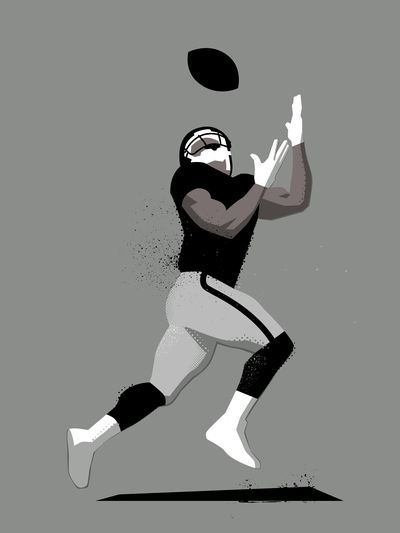 It has to be head coach Jon Gruden. The players all take their cues from him. He can be inspirational, as we all saw from the speech he gave to the rookies on the Hard Knocks premiere. He demands a lot and his players want to live up to his expectations of them. If anyone can get them to play outside themselves, it’s him.

Up until recently, I would have said Antonio Brown. The man never stops working. But at this point, after an offseason dominated by frostbitten feet and helmet drama, not many are probably thinking they should follow his regimen. Honestly, there isn’t anyone else who really stands out in this area. I knew a guy who would have been the ideal choice for this last year. He’s since been traded to Chicago.

Derek Carr’s pocket presence. Carr’s biggest weakness is his inability to play well under pressure. His one great season came behind arguably the best offensive line in football. Even then, he was known for getting the ball out quickly. When protection breaks down, he panics and hears footsteps even when there aren’t any. He flees clean pockets, but not to make a play with his legs. Carr will need to be able to create something on his own when things break down. If he can, this offense can survive. If not, they will go nowhere.

Silver and Black Pride prediction: 6-10 The Heart | by Levi Damien

They will be an improved team overall, but the Raiders have probably the toughest schedule in the league. After two home games on dirt to start the year — one against the Chiefs — they don’t play in Oakland again until November. All of those games are 10 a.m. Pacific Time starts, too. They begin the season without their two starting guards and left tackle Kolton Miller is still a work in progress. A more competitive team with a two-game improvement over last season’s win total seems right.

This feels about right. The Raiders’ offense picked up the pace last season, but I’m not sure everyone is sold on Derek Carr. Yes, the weapons are great and the offensive line should be improved. Still, the defense is just brutal. More importantly: Who’s going to rush the passer?

For more on the Raiders, check out Silver and Black Pride