Connor McDavid might already be hockey's most important player

The NHL, in its current state, is not really built for individual talent to shine.

From a team standpoint, it’s hard for one superstar to completely change things because your best players, unless they are a goalie, only play a third of the game.

Individual creativity and excitement has pretty much been coached out of the game. The latter is a complaint that keeps getting brought up by former players. Just over the past year alone Wayne Gretzky, Brad Richards and Pavel Datsyuk (an all-time great and two of the best players from their own eras) have all bemoaned the way individual creativity is starting to disappear from the league. It’s largely a product of the way the game is coached, and it’s not just an NHL thing. It starts at lower levels where youth coaches can sometimes be so focussed on winning games with their nine-and 10-year-old players that developing skills can take a backseat. The result is a generation of players that, for the most part, all look and play the same. They are developed the same way, brought up the same way, and taught to play the same way.

If you removed the names and numbers from every player in the NHL and covered their faces with a mask, you probably would not be able to identify more than a handful of them based on nothing more than the way they play.

Even the best players in the league tend to blend in with everybody else. Players like Jonathan Toews, Patrice Bergeron and Anze Kopitar are virtually indistinguishable from one another. You couldn’t tell Artemi Panarin from 100 other players in the league. That’s not a knock on them. They are all great, great players. Among the best in the world. But they are also product of 21st century, 200-foot hockey.

In today’s NHL safe isn’t death. It’s life. It’s playing time. It’s avoiding criticism for not making the big mistake because "you’re trying to do too much."

There are exceptions to this.

You would be able to quickly identify Alex Ovechkin and his powerful strides across the ice and the way the puck explodes off of his stick. You might be able to notice defenseman like Erik Karlsson and P.K. Subban glide through the neutral zone and join the rush. If you watched the Penguins enough you would be able to identify Sidney Crosby clown some helpless defender on one of those cycling plays below the goal line.

In the end, there might be 10-15 players (if we are being generous) that play the game in a way that clearly separates them from the rest of the pack.

We had been hearing about Connor McDavid’s arrival in the NHL for more than two years before it actually happened.

Potential that could one day make him the best in the world, and a player that could ride in and maybe help single-handedly elevate a franchise that was so bad that it was in a position to pick him

Even after only 45 games in the NHL, there is a strong chance he is already getting close to reaching the latter two levels. 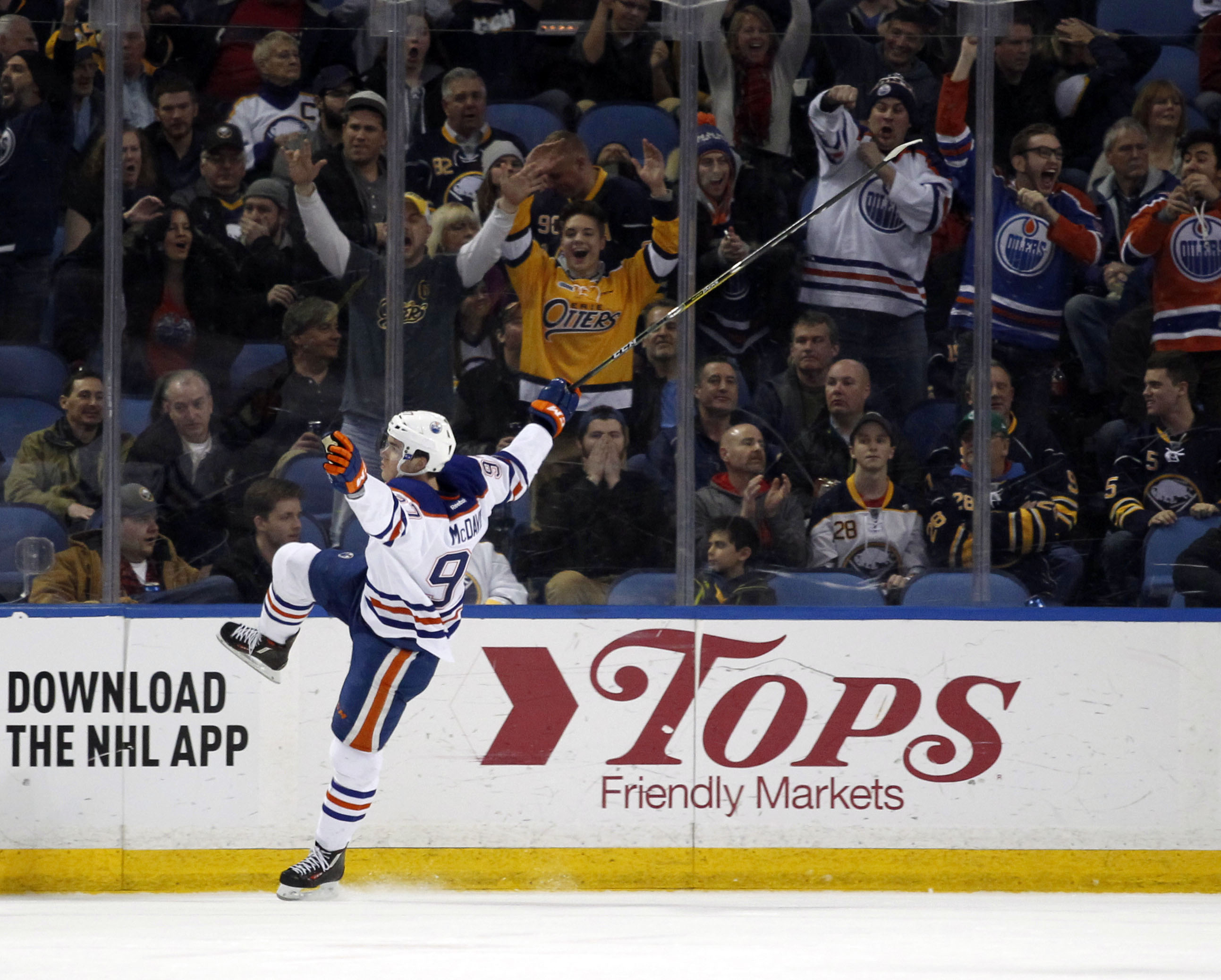 It all started with the hype.

McDavid was such a prized prospect entering his draft year that he helped produce one of the great tank-offs in NHL history. Multiple front offices and fanbases realized it was probably in their best interest to lose for a season, to just throw it in the garbage, and take your chances that the ping-pong balls were going to fall your way in the Draft Lottery.

A teenager playing in Erie, Pa., McDavid had fans in Buffalo openly rooting and cheering for the Sabres to lose games. And they were right to do it, because in an industry where the ultimate goal is winning a championship, it is worth sacrificing one year of an already bad team if you can get a Wayne Gretzky, Mario Lemieux, Eric Lindros, Alex Ovechkin or Sidney Crosby type of player. And based on everything we were told about McDavid prior to his entry into the league, there was a chance he could be that type of player.

When McDavid finally made his debut in the NHL he did not disappoint, minus the middle chunk of the season where an injury cut his rookie season in half. That injury robbed of us our chance to see what could have been one of the all-time great rookie seasons, and also fully experience just how good he can be right away.

What the injury gave us instead was four months of debate as to what the rookie of the year award is supposed to be.

On one hand there was Chicago Blackhawks forward Artemi Panarin, a 24-year-old winger with multiple years of professional experience in Europe that was playing on a line next to Patrick Kane, the NHL’s leading scorer and MVP award winner. He was in the lineup all season, remarkably consistent, and in the end the numbers were great. He was one of the NHL’s top scorers, while the chemistry he had developed with his linemates on Chicago’s top line was obvious.

But he didn’t always stand out or make people await his every move whenever he was on the ice.

On the other hand, there was McDavid. He missed half of the season and played on a mostly junk Oilers team that didn’t go anywhere. But he was also one of the NHL’s must-see players. Even when he didn’t score, he had a way of making highlight reel plays and demanding the attention of every single person that was in the building. Whether were you looking at it from a numbers perspective (he was a point per game player in a season where almost nobody else was) or the eye test, he was clearly the most outstanding and captivating rookie in the NHL.

He just didn’t play in as many games, on as good of a team, and get the opportunity to have that success translate to the raw stats.

Even though we have only seen him for 45 NHL games and a handful of World Cup games this fall, McDavid already looks like a player that is ready to completely take over the NHL and give us what we were anticipating going into last season. Not only because of the way he plays and the way he brings an excitement to the league that so few players can, but because he just might be the player that can help revive a franchise that has been the sorriest in the league for an entire decade.

His speed, ability to dangle opposing defenders and make routine plays that don’t even result in a goal look like highlight reel moments is a rare gift in today’s league.

If all goes according to plan for McDavid and the Oilers, he could one day (and probably sooner than later) be the best player in hockey. And what’s crazy about what we saw from him last season is that he might already be starting to get to that point.

From a production standpoint, his 1.06 point per game average was third in the NHL behind only Kane and Jamie Benn.

He was only the ninth player in NHL history under the age of 20 that averaged more than a point per game (again, minimum 40 games) in their debut season, joining a list that includes only Mario Lemieux, Wayne Gretzky, Steve Yzerman, Dale Hawerchuk, Bryan Trottier, Ron Francis, Eric Lindros, and Sidney Crosby. Every one of those players was among the best in the NHL by year two or three of their career and quickly rising to the top of the NHL’s scoring leaderboard.

With the exception of Crosby, just about every other player on that list had their debut season come in an offense-fueled era, and even Crosby had his during the 2005-06 season when scoring saw a massive -- but extremely brief -- surge do to the new rules coming out of the lockout. There were 37 players in the league that averaged a point-per-game that season. Only eight players, including McDavid, did it this past season.

It is a level of production that, quite literally, only the top one percent of the players in the league reach today. And McDavid was already there in his first season.

The impact that can have on a team can not be overstated. Even if the Oilers didn’t shave a single goal off of their goals against totals, just having a healthy McDavid for a full season scoring at the rate he scored at last season (and there is reason to believe he could actually improve that rate) could cut their goal differential from the minus-42 it was this past season to nearly single digits.

That means probably a record closer to at least .500, which would mean closer to playoff contention.

The Oilers have had top picks before.

Over the past decade the draft lottery has been their time to shine, and for the most part, they have hit on a lot of those top picks. Taylor Hall is one of the best left wingers in hockey. Ryan-Nugent Hopkins has been a criminally underrated player for a few years now. Even Leon Draisaitl, kind of a forgotten as a recent top-five pick, looks like he has a chance to be an outstanding player in the league for a long time.

But none of those players have been what McDavid already is, or could potentially turn into.

None of them had the potential to be as franchise-changing as McDavid.

Whether they intended to do it or not, when the Oilers made the controversial decision to trade Hall this summer to the New Jersey Devils for Adam Larsson in a stunning one-for-one deal, they made this McDavid’s team.

He is now the guy in Edmonton.

No player added this offseason is going to have a bigger hand in improving the Oilers than having McDavid around for an extra 40 games will have. Adam Larsson might be a solid No. 2 or 3 defenseman, but he’s not going to significantly alter the course of the team. Milan Lucic might still be a very good top-six player that brings a physical element to the ice and tries to change the culture in the room, but he is not going to create a huge tangible swing on the ice in terms of goals.

If he helps get that team, that miserable stinking team, within spitting distance of the playoffs, or even somehow in to the playoffs after a decade of sitting on the outside, he will be the guy in the NHL, too.