Sometimes one play can get a game into the top 10.

That the game was headed for overtime at 16-16 felt like justice in such an even game, but after Dalvin Cook took a reception 22 yards into Georgia Tech territory in the closing seconds, FSU ended up close enough to attempt a 56-yard game-winner by the great Roberto Aguayo. What’s the worst that could happen?

Michigan State is in no way a Cinderella. The Spartans have won 36 games in three seasons, finishing sixth or better in the AP each year. With 65 wins in six years, they have maintained success.

But Sparty’s run through 2015 felt like a Cinderella story during March Madness, merging exciting wins and eventually a discouraging blowout loss. (That’s how it tends to work after a 15 seed beats a 2 in basketball, right?)

State limped through the early portion, with a banged-up line blocking for young running backs and quarterback Connor Cook bailing the Spartans out on passing downs. Teams that beat Purdue and Rutgers by a combined 10 points aren’t supposed to make the Playoff.

But in the three games that mattered most, State came with its biggest moments.

Against Michigan, State became the first team since Week 1 to have any success against the Wolverines’ defense but still found itself down two points. Until …

That made Georgia Tech’s field goal return look almost commonplace. And despite a loss to Nebraska, it kept the Spartans on pace for a shot at the Big Ten title.

All they had to do was beat the defending national champion on the road, in wet weather, and without Cook. No problem.

Two weeks later, Michigan State went to Indianapolis, along with most of the state of Iowa, to face a 12-0 Hawkeyes team for the conference title and a Playoff bid.

Again, one moment changed our entire perspective of a game. The first three quarters of the Big Ten Championship were a dreadful slog. State headed into the fourth quarter up 9-6; the Spartans had been the more consistent team, but had missed opportunities. Then an 85-yard bomb from C.J. Beathard to Tevaun Smith changed everything. Iowa was up, 13-9.

After the teams traded punts, State took over at its 18 with 9:31 remaining. The Spartans pieced together a drive that was almost too methodical — after a couple first downs, it became evident this might be MSU’s last chance.

That this incredible run ended with a 38-0 dismantling by Alabama in the Cotton Bowl added a sour note. But one assumes the season review DVD will sell well.

TCU ended up reaching second in the polls because of an 8-0 start, but the Frogs barely survived September. An outright track meet saw TCU up 33-28 at halftime, but Tech twice took the lead in the fourth quarter. Justin Stockton’s 50-yard catch and run gave the Red Raiders a 52-48 lead and set the table, not only for an incredible game-winner, but for what was almost an even more incredible game-winner. 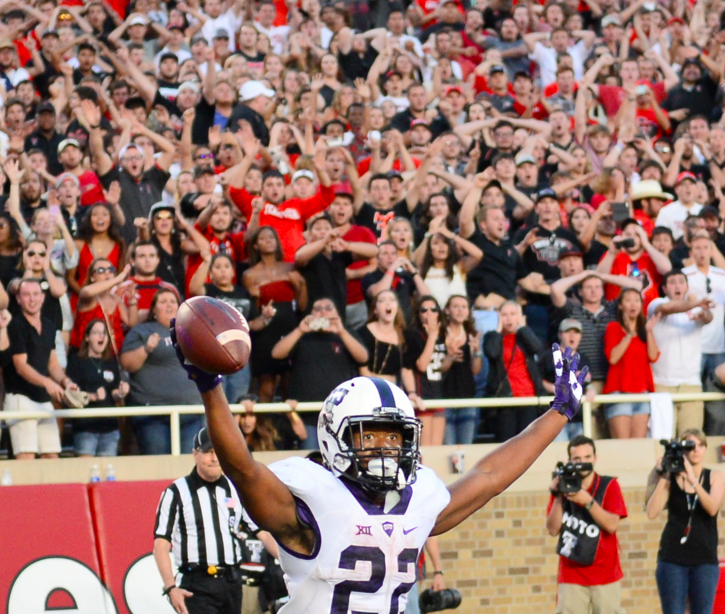 At 6-1 and 3-0 in conference play, Duke was in control of its ACC destiny when a listless Miami came to town. The Hurricanes had just lost by 58 at home to Clemson and watched their coach get fired. They had very little to play for, but pride carried them.

They held a 14-12 lead over the Blue Devils heading into the fourth quarter and extended that to 24-12 with a field goal and a Stacy Coley touchdown.

Duke quarterback Thomas Sirk went to work. Dinking and dunking, he finished a 14-play, 75-yard drive with a 13-yard strike to Johnell Barnes that cut Miami’s lead to 24-19. And after a Miami three-and-out, Sirk and Duke got the ball back with 1:50 left.

What’s funny about what happened next is how much I felt like Miami had gotten shafted before the final play. The Hurricanes were called for three pass interference penalties on Duke’s last drive, ranging from clear to incredibly questionable. And when Sirk barely plunged in (if he got in at all) with six seconds left, Miami had legitimate beef.

And then the beef transferred to the other sideline.

In four years as Ole Miss’ head coach, Hugh Freeze has gone 7-6, then 8-5, then 9-4, then 10-3. He is on his way toward another top-10 recruiting class in 2016, and despite losing a boatload of talent (including potential No. 1 pick Laremy Tunsil), he's building a sturdy foundation.

But that’s not his biggest accomplishment. This is: he’s the only coach in the last five years to beat Nick Saban twice. His Rebels beat Alabama in Oxford a year ago, then topped that by beating the eventual national champion in its home stadium.

And hey, all it took was an amazingly fluky touchdown and a plus-five turnover differential!

This game was nuts. Alabama fumbled the opening kickoff, handing Ole Miss an early field goal, then lost another fumble on a kickoff following an Ole Miss touchdown. The Rebels leaped to a 17-3 lead. It was 17-10 to start the third quarter, when things got even sillier.

Ole Miss’ lead would balloon to 30-10 late in the third. It was 30-24 when Cody Core score on a pop pass that proooobbbbably should have been flagged for an illegal man downfield.

Over? Not yet! Down 43-24, Alabama scored, recovered an onside kick, and scored again. It was 43-37 when the Tide forced a punt with three minutes left. But Tony Bridges intercepted a deep pass by Jake Coker, and after one more desperation drive, the Rebels left town with an amazing W.

A good season doesn’t need a good title game. There are always games to remember even if the last one is forgettable.

Still, the buzz from finishing the season on a high note is welcome. And for the third time in six seasons — 2010, 2013 — the title game was one of the best of the season.

This would have been destined for a spot in the top 10 whether or not Clemson had scored late to cut the final deficit to 10. This was a well-played game with plot twists, ballsy play-calls, only one turnover, only six penalties, and stars making star plays.

It began with the Heisman winner. Derrick Henry burst through on third-and-short, nearly stiff-armed someone from behind, and raced 50 yards for the game’s first score.

It continued with a Heisman finalist. Deshaun Watson threw two gorgeous touchdown passes to former walk-on Hunter Renfrow to give Clemson a 14-7 lead after the first quarter; he would finish with 405 passing yards and 73 rushing yards, on many cases wriggling out of the grasp of Alabama’s incredible defense.

The game was tied at halftime thanks to another short Henry score, but after a 53-yard touchdown to previously dormant O.J. Howard (who finished with 208 yards), Clemson responded again. A field goal and a short Wayne Gallman score gave the Tigers a three-point lead.

Then, after 45 points in three quarters, the teams scored 40 in a frantic fourth. Bama tied with a field goal, pulled off a picture-perfect surprise onside kick, and took the lead on a 51-yard Howard score. Clemson drew to within 31-27 with a field goal, and Kenyan Drake (who lost one of Alabama’s kick return fumbles against Ole Miss) returned the ensuing kick 95 yards for a 38-27 lead. Powered by a ridiculous 39-yard catch-and-run by Gallman, Clemson scored with 4:40 left, and a 63-yard catch by Howard set up a short, second-effort TD by Henry with 1:07 left.

Clemson was only mostly dead. Watson hit Jordan Leggett for a 17-yard score with 12 seconds left, but any hope for a Hail Mary shot died when Clemson’s onside kick attempt flew out of bounds. Alabama kneeled and secured its fourth national title under Saban. This was by far its hardest title game win.

Yes, suspensions and injuries played roles. If TCU’s Trevone Boykin doesn’t get himself suspended before the Alamo Bowl, the Horned Frogs don’t get outscored 31-0 in the first half. (Then again, they dug plenty of holes with him in 2015…) And if Oregon’s Vernon Adams doesn’t get hurt in the second quarter, the Ducks don’t get outscored 31-0 in the second half. This was still remarkable, even if you turned it off for a while because it was a blowout.

Reeling without Boykin, TCU began by gaining not even 100 first-half yards, punting five times, turning the ball over on downs once, and throwing an interception. Before Adams got hurt, the Ducks scored touchdowns on four consecutive drives. They tacked on a field goal before halftime, too.

When you’re down 31, however, you can afford to loosen up.

Head coach Gary Patterson changed into a lucky shirt, and a Jaden Oberkrom field goal got TCU onto the board and drew some half-sarcastic cheers. But those cheers grew more sincere when Bram Kohlhausen hit Jaelan Austin for a 26-yard score later on. Kohlhausen scored on a two-yard run late in the third quarter, and TCU was only down 14 heading into the final stanza.

With Oregon’s offense grounded not only by Adams’ injury, but also that of starting center Matt Hegarty — bad snaps derailed more than one drive — TCU kept plugging. Oberkrom made it 31-20 with 7:45 left, and Aaron Green, hero of the Texas Tech win, made it 31-28 with 3:32 remaining. Oregon went three-and-out once again, and with 19 seconds left, Oberkrom hit a 22-yard chip shot to send the game into the least likely of overtimes.

After Kohlhausen scored on an eight-yard run to make it 47-41 in OT No. 3, a bad snap turned a third-and-2 into a fourth-and-8, and Jeff Lockie’s crossing pass to Devon Carrington was broken up. Dead in the water 30 minutes in, the Horned Frogs pulled off an incredible win in a season of incredible games.

For a game to be the best of a year in this sport, you need quite a few ingredients: consequence, steady excitement, plot twists, maybe an amazing bounce or two. More than any game except maybe Alabama-Clemson, Ole Miss-Arkansas had each in droves.

Consequence: If Ole Miss wins, the Rebels win the SEC West. They probably beat Florida for the SEC title (their first in 52 years), and an 11-1 Alabama that isn’t a conference champion either struggles to get into the Playoff or has to face No. 1 Clemson in an Orange Bowl semifinal instead.

Plot twists: After such a back-and-forth game, both teams looked all but dead. Arkansas was almost done, facing a third-and-11 with two minutes left before Brandon Allen hit Dominique Reed for a 19-yard gain. And for a moment, it looked like Ole Miss was doomed after that — the Rebels failed on fourth down with nine seconds left, Allen and Reed connected for 21 yards, and Arkansas still had time to attempt a 47-yard field goal at the end of regulation. Only, Tony Bridges blocked it.

An amazing bounce or two:

Ole Miss won that game six different times in overtime and lost after a bounce, which Alabama might have needed to win the national title. Great, close, consequential … this was the best game of 2015.