San Diego State won the game that counted most. When these two teams played two weeks later in the MWC title game, the Aztecs took the crown in Laramie, 27-24.

But the first matchup was thrilling. SDSU led 27-20 in the fourth when Josh Allen and Jake Maulhardt connected for a 30-yard score. The Aztecs punted, and Wyoming unleashed the drive that would win the MWC Mountain: a 15-play, 85-yard, six-minute affair that culminated in a 29-yard pass to C.J. Johnson.

SDSU responded with aplomb. Christian Chapman and the Aztecs worked downfield, then completed a mini-Hail Mary to Quest Truxton on the final play of regulation. With no interest in sending the game to overtime — SDSU had already clinched the MWC West, so there was no need to prolong matters — the Aztecs went for two. Didn’t get it.

On October 1, Penn State was simply a 2-2 team that was still battling to make sure its head coach didn’t end up on hot seat lists. We know what the Nittany Lions ended up becoming — 11-game winners, Big Ten champs — but that flight almost didn’t get off the ground.

PSU trailed Minnesota 13-3 at halftime in State College before a third-quarter surge put the Nittany Lions up 20-13. Minnesota battled back to tie the game, then took the lead on a 37-yard field goal with 54 seconds left. But Trace McSorley found Chris Godwin for 20 yards with 35 seconds left, then raced 26 yards to the Minnesota 22. With seven seconds left, Tyler Davis nailed a 40-yard field goal for a come-from-ahead-and-behind win.

They wouldn’t lose again until January 2.

All of the following is true:

The first two weekends in October might have been the most exciting of the regular season. They provided 18 of the season’s top 100 games and 11 of the top 41.

Florida State had roles, for better and worse. The Seminoles had the habit of easing into games and forcing themselves to play from behind.

Against UNC in Tallahassee, the Noles found themselves behind 21-0 after 25 minutes before unleashing a 28-7 run. UNC went back ahead on a 34-yard touchdown pass from Mitch Trubisky to Thomas Jackson, but Walvenski Aime blocked the PAT. A trio of UNC penalties helped to get FSU to the 2, and Deondre Francois took it from there.

Ballgame, right? Nope. FSU committed a pass interference penalty with four seconds left, and given a chance to go from goat to hero after the blocked PAT, Nick Weiler seized it. He nailed a 54-yard bomb at the buzzer, then tomahawk chopped his way out of Doak Campbell Stadium.

The next week’s game at Miami had strange symmetry.

Early deficit? Check! Miami destroyed FSU at the line of scrimmage on the way to 13-0 lead over the first 29 minutes.

Comeback? Check! FSU hit a field goal at the end of the first half, then scored 17 straight to go up 20-13.

Gave it back? Check! After four straight scoreless possessions to start the second half, Miami scored thanks to a 43-yard Braxton Berrios punt return and an 11-yard catch by Stacy Coley.

Nothing tests one’s resolve like a 31-point deficit. In the first 20 minutes, Fresno State scored five times, twice on one-play drives. The Bulldogs put their win probability about as high as it could possibly go.

Tulsa scored three times in five minutes to cut the lead to 31-21 at halftime, then took a 38-34 lead midway through the fourth. Fresno responded with a 59-yard touchdown drive, and Tulsa sent the game to overtime with a 28-yard field goal.

Suddenly, the defenses showed up. Tulsa’s Jeremy Brady forced and recovered a fumble on Fresno State’s first possession, but the Bulldogs stuffed Tulsa and forced a long field goal miss. Tulsa’s Dane Evans scored on an 18-yard run, then a Petera Wilson Jr. sack forced a fourth-and-ballgame from the 32. The Bulldogs nearly completed it.

A Happy Valley upset of Ohio State turned out to decide the Big Ten East race. The Buckeyes were ahead for most of the game, but Penn State never let itself get put away. The Nittany Lions were down 21-7 entering the fourth quarter, but one big play turned the division.

Ohio State’s lead was 21-17 when Tyler Durbin lined up for a 45-yard field goal with four-and-a-half minutes to play, seeking to put the Buckeyes up by a touchdown. It didn’t work out.

The game that went so late, Mack Brown had to leave ESPN’s booth to catch a flight.

BYU played a series of barnburners, and this was the most extravagant. The Cougars’ fifth game was also their fifth to be decided by a field goal or less.

After BYU took a 7-0 lead in the first quarter, the game had eight more lead changes. There were five in the fourth quarter alone. The fourth came on a Toledo two-point conversion with 1:11 left, and the last came on Rhett Almond’s 19-yard field goal as time expired.

To college football’s establishment, Boise State is forever the upstart and a usurper. To the Broncos’ Mountain West neighbors, they are the establishment. Any upset of BSU is a watershed moment.

Wyoming is at times an impossible place to succeed, both in life and college football. Craig Bohl has begun to pull together the pieces to do impossible things — much like he did at North Dakota State — and the nation noticed for one night.

Chad Kelly about to run for the first down on 4th and long and then this happens. pic.twitter.com/Fm79HYfmxJ

… wasn’t quite the one in 2015 that landed Arkansas-Ole Miss the No. 1 spot on that top 100 list, but it was still a pretty fitting ending to another wild game.

Bret Bielema’s Razorbacks took a 17-6 lead in the second quarter and still led by seven heading into the fourth. But after an Ole Miss field goal cut the lead to four, Marquis Haynes picked off a pass to set up a short field and a 17-yard Chad Kelly touchdown run.

When Arkansas took the lead again with 2:20 left, it felt preliminary to a crazy ending. Instead, Kelly’s crazy fourth-and-16 scramble resulted in a flying ball, a turnover on downs, and an Arkansas win.

Arkansas blowing early leads was a trend. While it cost the Razorbacks later — among other things, the Hogs blew large leads in season-ending losses to Missouri and Virginia Tech — they were able to rebound early on. In Fort Worth in Week 2, they held a 20-7 lead after three quarters, then collapsed.

It took TCU 17 plays to score three fourth-quarter touchdowns and take a 28-20 lead, but Arkansas responded with a 58-yard touchdown drive and the ol’ reverse throwback two-point conversion.

Overtime? Not yet. TCU’s Kavontae Turpin returned the kickoff 64 yards to the Arkansas 27, and four plays later, the Frogs lined up for the game-winning 28-yard field goal. Dan Skipper, Arkansas’ 6’10 offensive lineman, blocked it.

Arkansas scored in three plays, then TCU scored in five. TCU went three-and-out and kicked a 37-yard field goal, and the Hogs needed only four plays to again gain 25 yards and win the game. After scoring the game-tying two-point conversion, Austin Allen rushed for a five-yard score to ice the victory.

This might have been the most Big 12 game ever. Every stereotype was reinforced in this ridiculous track meet.

The first awesome game of bowl season. It ended on a time-expired field goal by LA Tech’s Jonathan Barnes, but what made this special was all the action it crammed into its last five minutes.

With just more than four minutes to play, the game was tied at 38. Then Tech’s Carlos Henderson did this:

So Navy’s fourth-stringer, Malcolm Perry, entered. And on Perry’s first play, he dashed 30 yards to knot the score at 45 apiece.

Tech still had 3:40. The Bulldogs marched 70 yards in nine plays and won on Barnes’ field goal. Abey appeared healthy enough to return, but the Bulldog offense ensured he never got the chance.

There is an extra bolt of energy from unexpected greatness. We know what the big games are, and when they live up to hype, it is wonderful. But college football is even more fun when you get sucked into a random afterthought.

Maybe the most randomly captivating game took place in Athens, Ohio, in Week 1, when an Ohio that would nearly win the MAC fell to a Texas State that wouldn’t beat another FBS team all year.

A back-and-forth affair went nuclear. Texas State took a 35-31 lead with 51 seconds remaining, and Ohio responded with a 75-yard touchdown from Greg Windham to Papi White 13 seconds later. Then TXST’s Tyler Jones (40-for-55 for 418 yards on the day) completed four passes for 61 yards to set up a game-tying Marcus Ripley field goal.

After trading field goals in the first OT and five-play touchdown drives, State scored a touchdown in the third with a 22-yard throwback to Jones.

Jones found Gabe Shrade for the mandatory two-point conversion, and while Ohio needed only three plays to respond, the Bobcats’ own two-pointer failed.

This game meant absolutely nothing in the grand scheme of things. And it was incredible all the same.

Clemson makes a lot of appearances in the home stretch of this countdown, enough that this incredible game doesn’t even appear among the Tigers’ top three. And all Clemson did was score 17 fourth-quarter points to beat an improving Florida State.

FSU finished winning seven of eight; the Seminoles’ only slip-up after losing to North Carolina came here. Dalvin Cook rushed 19 times for 169 yards, and his touchdown runs of 43 and 70 yards gave the Noles a 28-20 lead heading into the fourth quarter.

Clemson couldn’t peak unless it had some blood in the mouth. Wayne Gallman scored to make it 28-26, and though the two-point conversion pass failed, the Tigers forced a three-and-out then went ahead on a 46-yard field goal by Greg Huegel. A 38-yard run by Freddie Stevenson set up Cook’s fourth touchdown of the day, but Clemson immediately responded. Deshaun Watson hit Jordan Leggett three times, for 25 yards, 11 yards, and a 34-yard score with 2:06 left.

FSU converted a third-and-23 to advance into Clemson territory, but a couple of penalties (which had Jimbo Fisher furious) and a couple of sacks ended the game.

The first half of the Big Ten Championship, in one visual:

And the second half:

It was as exciting as any Big Ten game with two total touchdowns could possibly be.

It was mainly a duel of field goals, and a 33-yarder by Iowa’s Keith Duncan on the last play sent Michigan to its first of three late-season losses. But Iowa had to stitch a lot of things together to make it possible — a second-quarter safety that got the Hawkeyes on the board while they were down 10-0, for instance, and punter Ron Coluzzi producing offense by drawing personal fouls on failed fake punts.

Matt Rhule’s final year at Temple resulted in an AAC championship, but the Owls wouldn’t have reached the title game if not for a stunning comeback in Orlando.

McKenzie Milton’s 63-yard touchdown run gave UCF a 25-7 lead early in the second quarter, and Temple needed every bit of the game’s remaining 42 minutes to make up the difference. It was 25-14 at halftime and 25-20 at the end of three quarters, but the Owls twice failed on fourth down in UCF territory in the fourth.

When UCF’s Trysten Hill sacked Phillip Walker on fourth-and-long with 1:41 left, the game appeared all but over. But Temple forced a punt with 41 seconds left, and Walker found Ventell Bryant for consecutive completions of 20, 16, and 26 yards. With 10 seconds left, Walker lobbed a tough ball to Keith Kirkwood, and the big receiver came down with it in the back of the end zone, saving the Owls’ AAC hopes.

Inside Army’s secret plan to finally beat Navy after 14 years:

Army head coach Jeff Monken, 36 hours before game time: "We all want the streak to be over with. I’m tired of hearing that crap. But this 2016 team is not responsible for the last 14 years. This team has not played together as a team 15 years in a row. 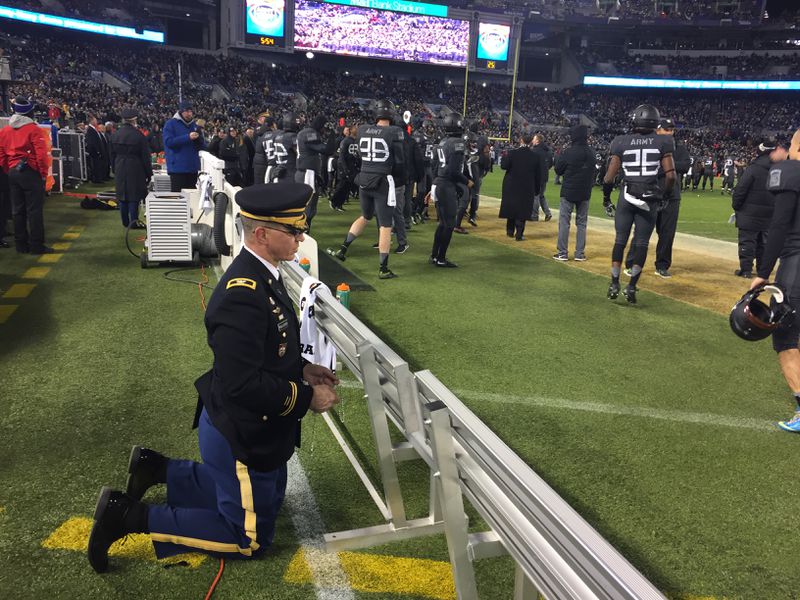