Perhaps the most forgotten premier guard in the country, Frazier averaged 18.8 points, 6.2 assists and 4.7 rebounds per game his junior year, accounting for 58 percent of Penn State's offense. The reason he's still forgotten is because of the ACL tear he suffered just four games into what was supposed to be his final year as a Nittany Lion. Instead he's back for one more go-round in Happy Valley, much to the delight of State fans hoping the team can improve upon the two Big Ten wins it posted a season ago. As for his knee, Frazier put to bed the concerns of the many doubters who believed he'd never get back to full strength when he dropped 26 points in the second game of PSU's European exhibition tour over the summer.

The explosive Jefferson had the potential to be a first round pick in last summer's NBA Draft, but chose to return to Waco for one more run with the Bears. The fifth year senior started all 37 games for Baylor in 2012-13, averaging 13.3 points, 8.0 rebounds and 1.9 blocks. He led the Big 12 and ranked sixth nationally with a .610 field-goal percentage, and recorded 10 double-doubles, the fourth-most in the league. He closed the season by averaging 21.6 ppg during BU's run to the NIT title.

With a plethora of talent around him, Ferrell did a great job of shifting from the score-first guard he was in high school to the facilitator Tom Crean needed him to be during his first season as a Hoosier. Now Crean might need him to shift back. Ferrell spent a large portion of his offseason working on getting better from behind the three-point line, an area where he shot just 30.3 percent last season. Everyone expects a drop-off from Indiana this season, how severe that drop is - or whether it occurs at all - will depend largely on the play of their sophomore point guard.

A first team all-conference performer as a junior in 2012-13, Harris ranked fourth in the ACC in scoring (16.3 ppg) and three-point percentage (42.5), and fifth in made three-point field goals per game (2.2). He was the league's second-leading scorer (18.4 ppg) during conference play, and is the only first team All-ACC honoree back for another season of college ball.

The versatile 6'6 guard might be the most proven player in the SEC, coming off a season in which he was the Volunteers' leading scorer (15.7 ppg). He also wears a number (52) that you almost never see a guard sporting. Somehow I think that makes everything he does that much more impressive.

College basketball people have marveled at Young's physique for what feels like about a decade now, but they've also been waiting for him to evolve into one of the sport's most dominant big men for just as long. That hasn't happened yet, with Young posting averages of 10.1 points and 6.3 rebounds in his junior season, both down a decimal point from the year before. He's talked often this offseason about wanting to "play loose" in his final year as a Gator, a mindset which should help him finally access at least some portion of that vast untapped potential.

The whispers around Lexington this time last year were that Cauley-Stein had been getting the better of projected No. 1 pick Nerlens Noel during pick-up games and early practices. Though Cauley-Stein was never able to usurp Noel as UK's starter until the latter went down with a season-ending knee injury, he did more than enough with his time on the court to warrant an early first round selection had he chosen to follow Noel to the league. Instead, he's back to man the middle for the Wildcats and make a run at UK's second national title in three years. He's also about to be fully discovered as one of college basketball's most eccentric personalities, and might be the first guy you should turn to for help should a zombie apocalypse breakout this afternoon.

The return of Marcus Smart has made Nash somewhat of an afterthought, which is crazy to think about considering the level of hype he originally brought with him to Stillwater two years ago. While he didn't have enough pieces around him to fully shine back then, ample help is no longer a concern at Okie State. It's a perfect situation that head coach Travis Ford says the now veteran Nash is ready to cash in on.

"He played as well as anyone during the summer," Ford recently said of Nash, who averaged 14.0 points and 4.1 rebounds per game last year as a sophomore. "He didn't have the help he needed when he came here but now that's not the case. He understands how tough he is to stop. His maturity level has really impressed me. I'm expecting really big things out of him."

While the lawsuit he filed against his former school, Xavier, has dominated any offseason Google News search of Wells' name, the fact remains that he's about to become the face of Maryland basketball because of what he does on the court. The Terps' leading scorer (13.0 ppg) and assist man (3.0 apg) last season, Wells can consistently get into the lane as well as anyone in college basketball. They'll largely go as he goes now that Alex Len is suiting up for the Phoenix Suns.

His jarring personality has created a situation where, as a direct reaction to it, people both overrate and underrate Henderson's actual merit as a player. The controversial senior guard, who is practicing with Ole Miss but remains suspended indefinitely, can single-handedly keep the Rebels in a game with just about anybody, but is just as likely to cause his team to lose control of a game that had appeared to be well-in-hand. Still, his accomplishments last season - he led the SEC in scoring (20.2 ppg) and nearly guided the Rebs to the Sweet 16 - speak for themselves.

Folks who have seen the 7-footer since he arrived on campus have marveled at his natural skill, including his head coach. Bill Self says that the native of Cameroon, who played soccer growing up, might have the best feet of any big man he's ever seen.

"I think it kind of reminds me a little bit of (Hakeem) Olajuwon early in his career," Self said. "I'm not saying he's Olajuwon; I'm not saying that at all. But (there are) some similarities when (Olajuwon) was real raw and he was young - but was always light on his feet. And I think Joel is the same way."

Had Wichita State played solid basketball in the final five minutes of their Final Four loss to Louisville, Early might be entering his senior season as a household name. Instead, he's having to settle for a healthy dose of national love in preseason pieces like this one. While most remember him for being one of the NCAA Tournament's breakout stars, Early's play when tossed into the spotlight didn't come as all that much of a surprise to those who had seen the Shockers play before then. Though the 6'9 forward was prone to spending too much time on the perimeter, he still produced a handful of monster performances, including a 39-point outburst in a win over Southern Illinois.

Sulaimon averaged 11.6 points per game as a freshman and figures to fill a much bigger role for Coach K this season. Krzyzewski recently named four starters and said that Sulaimon was one of a couple players competing for an open fifth spot, but it's hard to imagine that being anything more than a motivational tactic. With Ryan Kelly, Seth Curry and Mason Plumlee all graduated, the Blue Devils need leaders, and that's an area where Lil' Wayne's least favorite Dukie has to step up.

The speedy floor general was one of the best freshmen in the country last season, sporting team-best averages of 15.2 ppg and 4.6 apg. The Cincinnati product scored in double figures in each of Xavier's final 18 games, but needs to showcase some improvement from beyond the arc now that the word is out on his ability to get to the bucket.

Ross steps into basically the same situation DeShaun Thomas found himself in 12 months ago, when the entire college basketball world expected him to fill the monstrous shoes left behind by Jared Sullinger and become a star. Ross showed signs of making the same jump Thomas did at the end of last season, when he averaged 17.7 points per game and shot 50 percent from the field in Ohio State's last three games of the NCAA Tournanment. Everyone knows he can score, but proving he can consistently defend in the post will be the biggest challenge Ross faces in his heightened role.

Lost in the hype surrounding Shabazz Muhammad and the debate over Ben Howland's job security was the fact that Adams was probably the Bruins' best player and certainly one of the most productive freshmen in the country. The 6'5 guard averaged 15.3 points and 3.8 rebounds per game, and made big play after play for UCLA in key situations throughout the year. If he didn't break his foot in the Pac-12 Tournament, then the Bruins could have made a run in the big dance, and Howland might still have a job.

Colorado has crashed the NCAA Tournament in consecutive seasons for the first time since 1963, and the play of their point guard has been one of the biggest reasons why. As a sophomore in 2012-13, Dinwiddie led the Buffs in in both points (15.3 ppg) and assists (3.0 apg) on his way to first team All-Pac 12 accolades. He spent his summer playing for Team USA in the World University Games, where he led the entire tournament in assists. He also boasts one of college basketball's best mustaches. 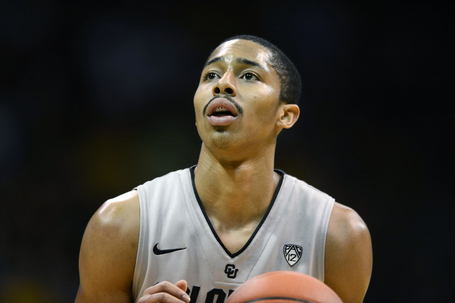 The 7-foot-1 center who can do as much (or more) damage on the perimeter as he can in the paint averaged 13.0 points and 8.3 rebounds as a freshman. He drew some heavy criticism, however, for his willingness to settle for the outside shot and not use his height to get easier shots around the rim. Austin took 90 three-pointers last season, a total which accounted for nearly 25 percent of all the shots he attempted. An offseason where he added nearly 20 pounds of muscle should help make that ratio a tad more ordinary in 2013-14.

The 6'10, 260-pound big man was huge for the Wolverines during their run to the national title game, averaging 14.3 points and 10.8 boards in six postseason contests. He was so good on the largest of stages that many assumed his first season for John Beilein would be his last. He chose to stick around, but a lingering lower back injury has kept him from starting practice with the rest of his team.

Haws averaged 21.7 points per game last season, and that was coming fresh off a two-year Mormon mission which kept him from playing any organized basketball. He's now entering his fifth year as a college-eligible player, but this is the first time he's gone through a complete college offseason. That offseason included a trip to Russia with the USA World University Games team. Playing for a squad that needs him to put up the gaudy numbers he's capable of, expect the Jimmer comparisons to flow (too) fast and (too) furiously for the next six months. You could be looking at college basketball's leading scorer for 2013-14.