While the rest of the college hoops world seems in a rush to hand the bulk of its major preseason awards to a freshman, SB Nation's panel of experts have opted in favor of a guy with a little bit more experience.

Oklahoma State's Marcus Smart is the only unanimous first team selection on SB Nation's preseason college basketball All-America squad, as well as the network's runaway choice for preseason Player of the Year. The man who perhaps would have been the No. 1 pick in the 2013 NBA Draft had he chosen to leave Stillwater was the POY choice on 15 of the 27 ballots cast. Creighton's Doug McDermott (7), Kansas' Andrew Wiggins (3), Louisville's Russ Smith (1) and Ohio State's Aaron Craft (1) were the only other players to receive a nod.

The lone unanimous first team selection and SB Nation's preseason Player of the Year, Smart has made no attempt to hide his belief that he's the player in college basketball most-deserving of these types of accolades. There are plenty of experts who agree, and plenty more who believe Smart would have been the No. 1 overall pick in last June's NBA Draft had he elected to turn pro. It's a belief so popular that it makes his decision to play one more season under Travis Ford -- and compete with a much deeper draft class in 2014 -- one of the most surprising in recent memory. His potential financial loss is Oklahoma State's gain, as the unanimous Big 12 Player and Freshman of the Year will be looking to lead the Cowboys into the second round of the big dance for the first time since 2005. 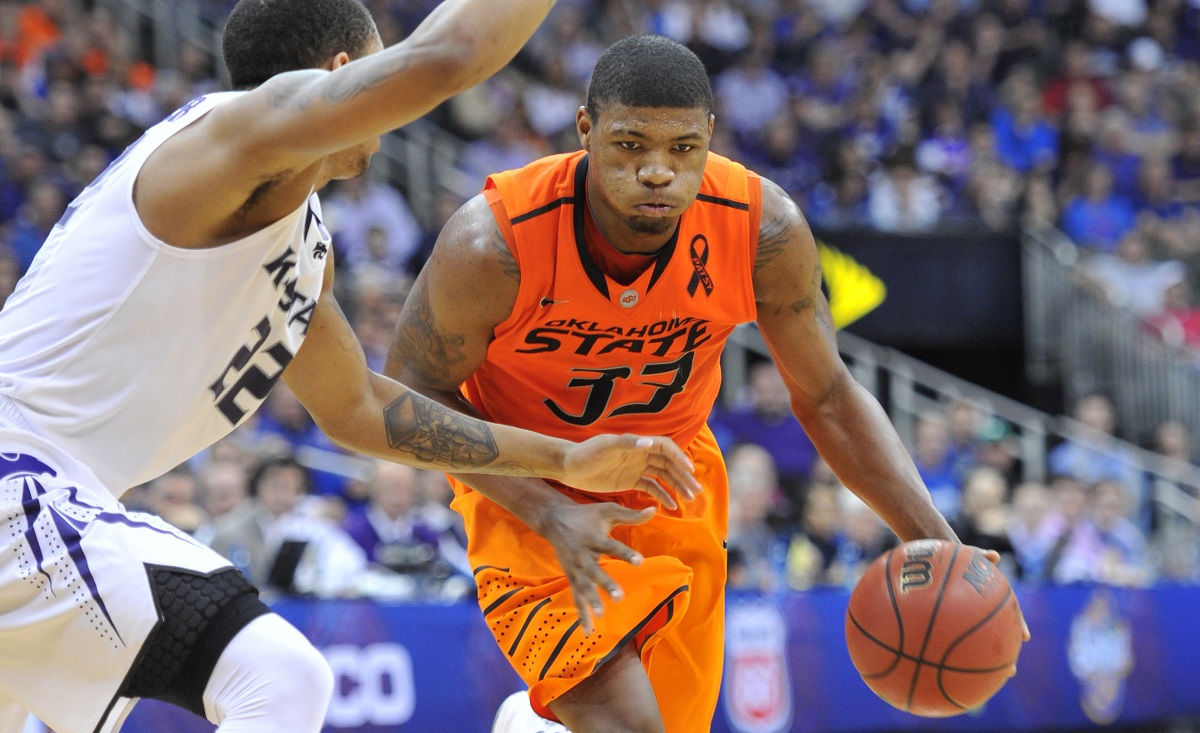 The only other player to receive multiple Player of the Year votes, McDermott will almost certainly be a first team preseason AP All-American for the second year in a row when the honorees are announced later this month. He was also a postseason first-teamer in both 2012 and 2013. You can Google the stats, awards and stories about him walking on as a senior for yourself, but McDermott's 2013-14 season is basically about one thing: getting Creighton out of the NCAA Tournament's opening weekend for the first time in four decades. 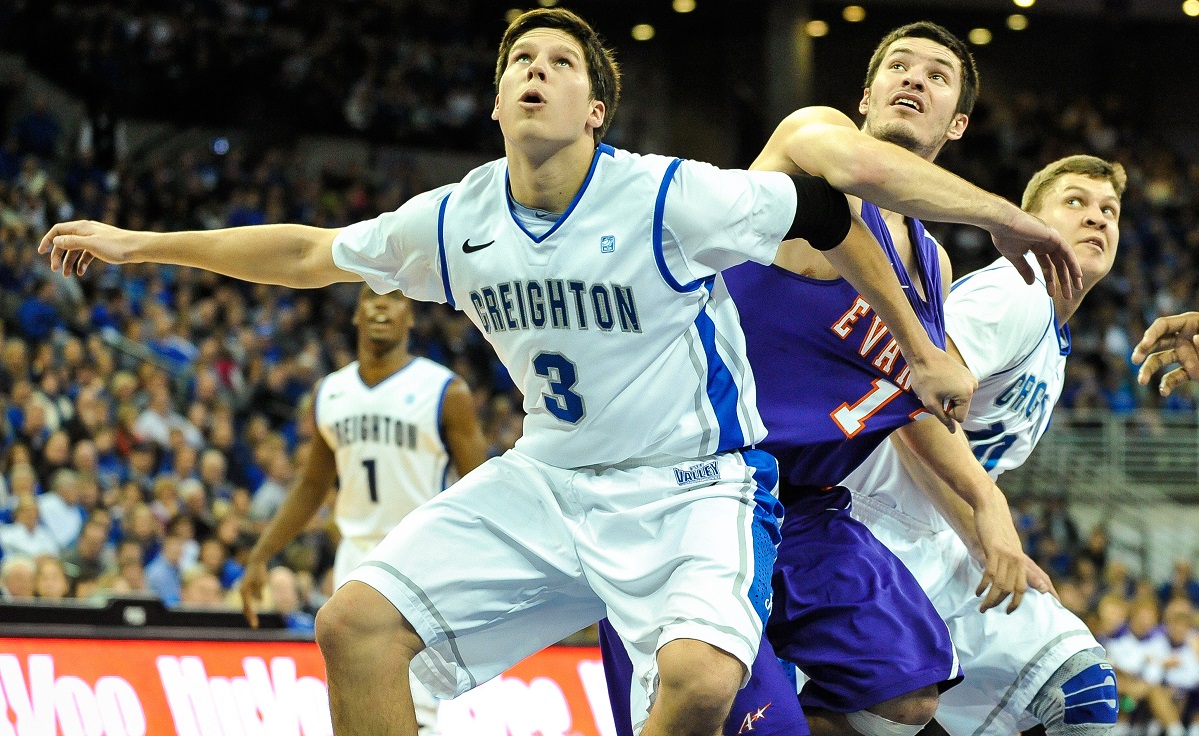 Critics are quick to point out his questionable decision-making and spotty jump-shot, but the fact remains that Smith averaged 18.7 points per game for a team that was the No. 1 overall seed in the NCAA Tournament and went on to win the national championship. The last player to average more points for a national champion and decide to come back to school was Duke's Jason Williams, who averaged 21.3 ppg in 2000-01 before electing to play one more year in Durham. If that wasn't enough to sway you on Smith's merits as the third leading vote-getter on this team, then there's also the fact that he's likely going to leave Louisville as the school's all-time steals leader. 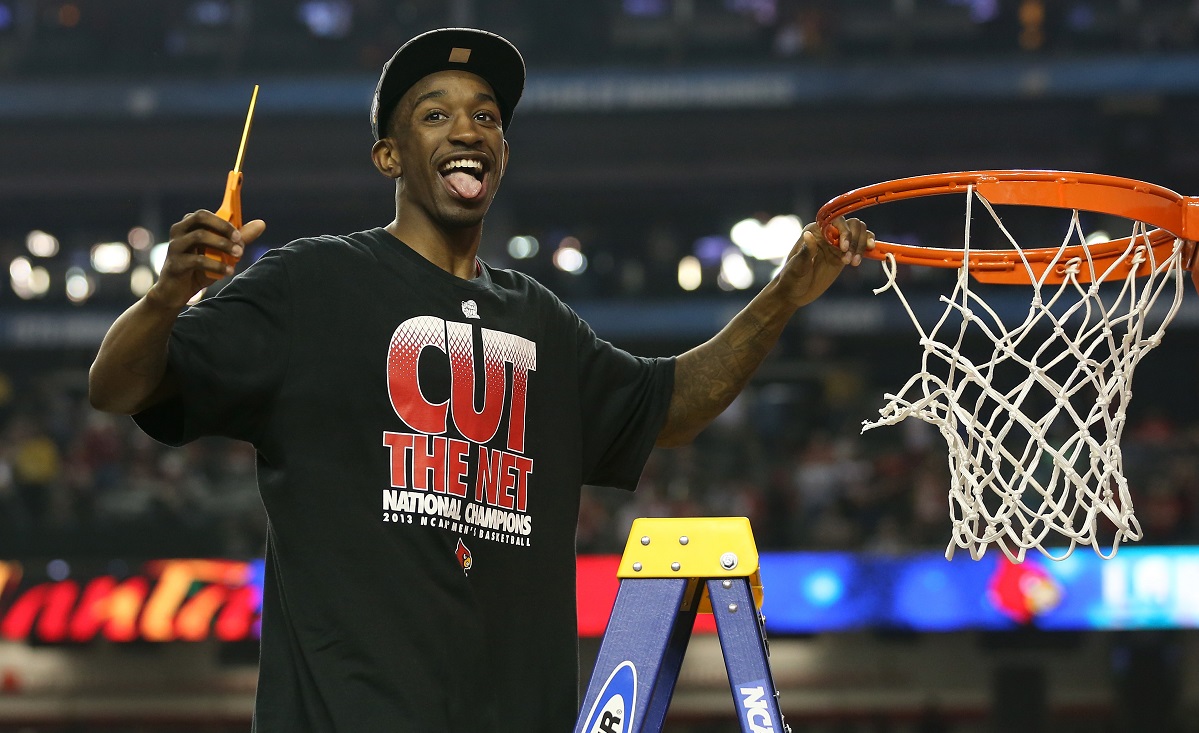 We've seen a handful of freshmen rack up national awards in recent years, just never before the season. The accolades should be expected when you're referred to as the "biggest can't-miss NBA prospect since Kevin Durant" as often as Wiggins has been. Though Bill Self has tried to temper expectations in recent weeks, the 18-year-old Wiggins' decision to become a Jayhawk will make every nationally televised Kansas game a must-watch occasion for college and pro fans alike. SB Nation's experts aren't as sold as the rest of the country, however, as the freshman was just the fourth leading vote-getter on the first team. 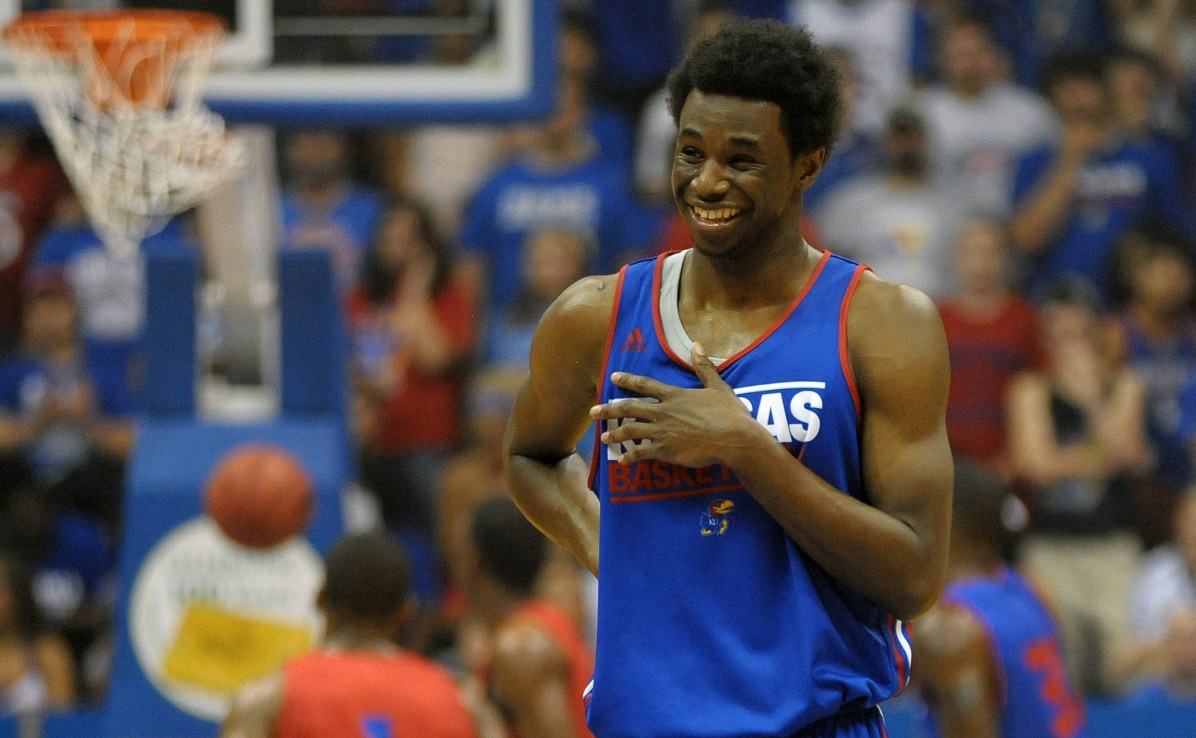 A bit of a wild card selection, McGary appeared as a first-teamer on 11 different ballots. The 6'10, 260-pound big man was huge for the Wolverines during their run to the national title game, averaging 14.3 points and 10.8 boards in six postseason contests. He was so good on the largest of stages that many assumed his first season for John Beilein would be his last. He chose to stick around, but a lingering lower back injury has kept him from starting practice with the rest of his team. 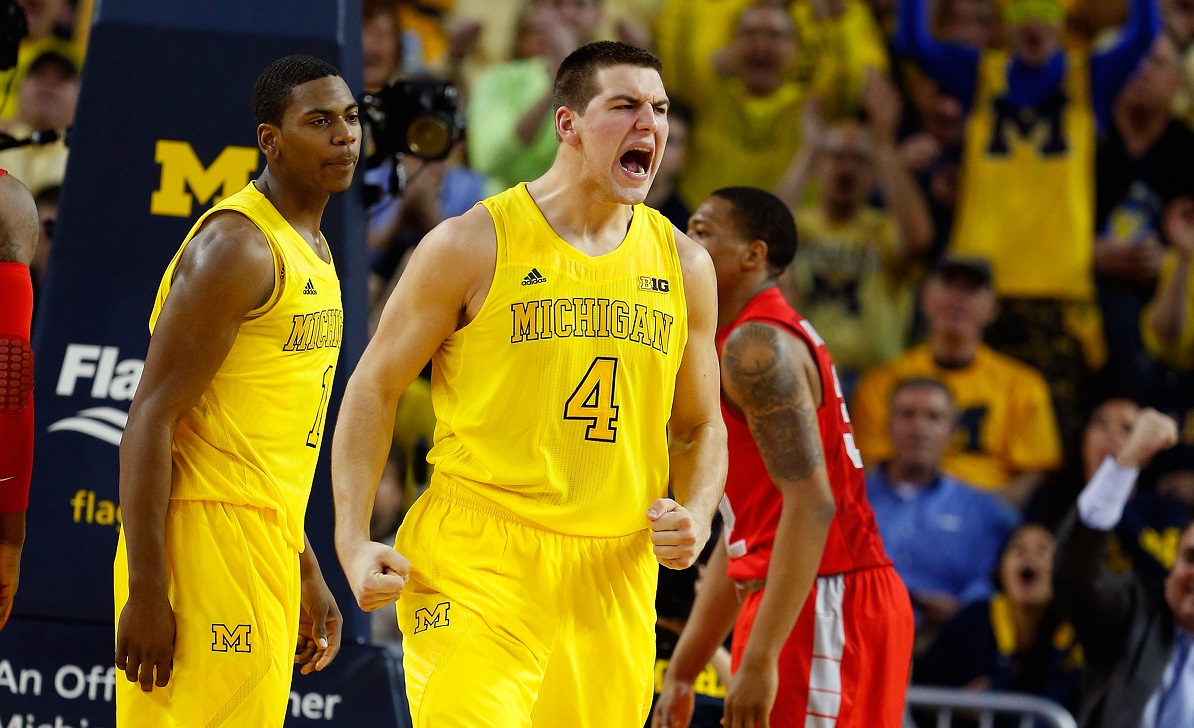 Craft is sure to be the butt of about a trillion awful "when is this guy going to graduate?" jokes during his senior season, but that's only because of how solid he's been since donning a Buckeye jersey for the first time three years ago. As a testament to his nearly unrivaled consistency, Craft was nearly the only player besides Smart and McDermott to be either a first or second team selection on every ballot cast, being omitted just twice. You'll hear the words "best on-ball defender in college basketball" hurled in his direction early and often this season, a distinction he's proven himself worthy of time and time again.

Expectations for Harris were so high in East Lansing that a season which saw him earn Big 10 Freshman of the Year honors was viewed as a disappointment by some. It ended on a particularly sour note, however, as Harris missed nine of 11 field goal attempts and was lit up by Seth Curry during Michigan State's Sweet 16 loss to Duke. If he can avoid the injury bug that has followed him fairly relentlessly over the past 12 months, then it's hard to envision a more confident and aggressive Harris not having a monster sophomore campaign.

If there's a player in the country capable of displacing Andrew Wiggins as the top pick in next summer's NBA Draft, it's Randle. He has a body that would terrify the biggest guy at your gym, and the world class athleticism to consolidate it. Expect to hear his name and "victimized" in the same sentence more than a few times between November and March.

Payne finally had the breakthrough pro scouts had been waiting to see during the second half of last season, notching double-doubles in six of Michigan State's last 11 games. The elevation in his game left plenty of people surprised to see Payne elect not to take it to the NBA, a group which included head coach Tom Izzo. The big man and classmate Keith Appling will now try to avoid the dubious distinction of becoming the first Spartans to play four years under Izzo and not make it to a Final Four.

It's a bit ironic that Andrew Wiggins was commonly referenced as "the best high school basketball player since LeBron James" since it was Parker who appeared on the cover of Sports Illustrated along with that exact description. A nagging foot injury forced him to relinquish his stranglehold on both that title and the No. 1 ranking in the class of 2013. The injury has also left a number of folks wondering what expectations for Parker should be in what will likely be his only season as a Blue Devil.

The most-recent MVP of the McDonald's All-American Game was also the leading scorer and rebounder for the U-19 USA squad at last summer's FIBA World Championship. Outside of his NBA-ready body and athleticism, Gordon's largest asset might be his maturity. His coaches and teammates have raved about his selflessness, and he's already emerged as a leader on a team that was desperate for one at times last season.

Perhaps the most consistent player in the country, Fair led last season's Final Four squad in scoring (14.5 ppg) and rebounding (7.0 rpg). Though he's known mostly for his work around the rim, the forward also drilled nearly 47 percent (30-of-64) his three-point attempts. With Brandon Triche, Michael Carter-Williams and James Southerland all being paid to play the game, Fair enters his senior season as Syracuse's unquestioned "go-to-guy" for the first time in his career

Despite playing on a team that began the year knowing it was banned from any type of postseason play, Napier was a star for first-year head coach Kevin Ollie. He ranked in the Big East's top 10 in scoring (17.1 ppg), assists (4.6 apg) and steals (2.0 spg), and earned first team all-conference honors. He was also the only player in the league to average at least 15 points, four rebounds and four assists.

Head coach Herb Sendek has already said that this will be the final season in Tempe for Carson, who averaged 18.5 points, 5.1 assists, 3.7 rebounds and 1.2 steals last year as a freshman. He led the Pac-12 and set a school record by notching 20 or more points in 18 games last season, and helped guide the Sun Devils to a 22-13 record and an NIT appearance.

Had Wichita State played solid basketball in the final five minutes of their Final Four loss to Louisville, Early might be entering his senior season as a household name. Instead, he's having to settle for a healthy dose of national love in preseason pieces like this one. While most remember him for being one of the NCAA Tournament's breakout stars, Early's play when tossed into the spotlight didn't come as all that much of a surprise to those who had seen the Shockers play before then. Though the 6'9 forward was prone to spending too much time on the perimeter, he still produced a handful of monster performances, including a 39-point outburst in a win over Southern Illinois. 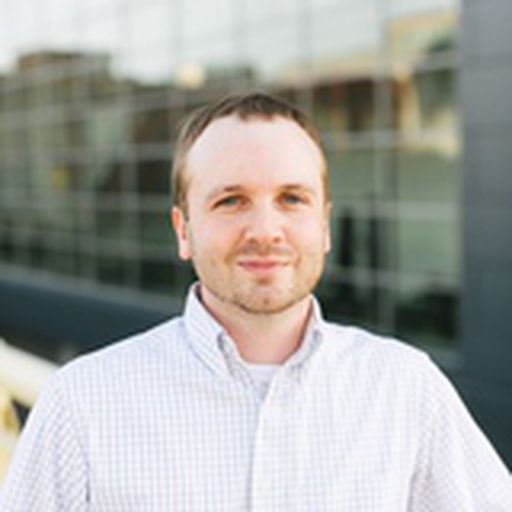 Mike Rutherford is a college basketball contributor for SBNation.com as well as the manager of Card Chronicle. He lives in Louisville, KY where he's still best known for a runner-up performance in the 1997 city spelling bee.