The latest in the long line of Chicago hoops talent is another Duke commit.

Share All sharing options for: Chicago's Jahlil Okafor, the latest Duke commit, is a rare beast

The amount of high-level basketball talent coming out of Chicago is getting a little out of control.

Derrick Rose went from winning back-to-back state championships at Simeon to becoming the youngest MVP in NBA history by his third season. Anthony Davis was a guard at Perspectives with only a scholarship offer from Cleveland State before a late high school growth spurt turned him into the nation's top recruit. He swept every major award category during his one year at Kentucky as the dominant force behind a team that went 38-2 and won the national championship. The rest of the country is only now becoming familiar with Duke's Jabari Parker, who became one of the most heralded basketball players in state history after leading Simeon to four state titles.

The pipeline isn't about to run dry. Chicago boasts arguably the two best high school players in the country this year, Whitney Young center Jahlil Okafor and Curie power forward Cliff Alexander, both of whom made their college decisions on Friday. Alexander will play for Kansas and Okafor, the consensus top overall player in the class, will follow in Parker's footsteps at Duke. While such an incredible string of local talent may desensitize some to how truly impressive it all is, Okafor is not the type of player meant to blend in with a crowd. 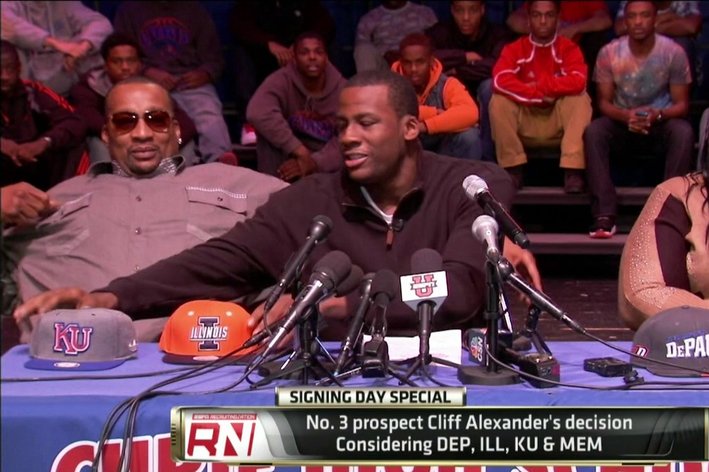 The consensus top-five recruit will take his talents to Kansas.

Okafor has the body of a giant and the game of a dinosaur. He's a throwback to an era before he was even born, the type of player who would have been more recognizable during the '90s than now. While most of the top-rated big men to come out of high school in the U.S. have made their name with height, athleticism and coordination, Okafor comes with an added bonus: He already has a refined post-up game.

Okafor isn't an athlete the caliber of Davis, Andre Drummond or Nerlens Noel -- a few of the top-rated center prospects in recent years. He isn't exactly gravity-bound, but at 6'11, 280 pounds, Okafor is not the type to soar over most NBA-level athletes for a rebound. That's OK. Okafor's back-to-the-basket game is already more developed than many pros. Whatever he loses in jump-out-of-the-gym athleticism he more than makes up for with skill.

People around the Chicago high school scene have known what type of player he is for years. Okafor first gained notoriety as a 6'7 eighth-grader when DePaul offered him a scholarship, a violation of NCAA rules. By the time he was a freshman at Whitney Young, he was starting for a high school team that had a bigger and more talented front line than most major conference college teams, playing alongside 6'7 Georgetown commit Paul White and current DePaul freshman center Thomas Hamilton Jr.

Okafor has been been one of the top-rated players in his class ever since, making the rounds nationally on a loaded Mac Irvin Fire AAU team. He really started to separate himself at the FIBA U19 World Championships. Okafor was the lone high schooler on a team featuring college stars Marcus Smart and Montrezl Harrell and players a year older than him like Arizona freshman Aaron Gordon. Despite his age, Okafor was perhaps the most impressive player in the entire tournament.

The best big man in the world who's not in the NBA.

Okafor was one of two Americans selected to the all-tourney team. He didn't start and played just 14 minutes per game, but his numbers were startling. Okafor was the Americans' second-leading scorer by averaging 10.8 points per game, shooting 77.2 percent from the field. Okafor posted a 40.2 PER in nine tournament games, according to Draft Express, as the U.S. went on to win the gold medal handily over Serbia.

After the FIBA tournament, one coach called Okafor "the best big man in the world who's not in the NBA."

Draft Express is already projecting him as the top pick in the 2015 NBA Draft, an honor Rose enjoyed in 2008 and Davis had 2011. While that's an unfair expectation for a kid just beginning his senior season in high school, it isn't unwarranted. Post players are a dying breed in the NBA, but Okafor has the game to bring the style back to prominence. He's also worked to develop a jump shot that's deadly from about 15-feet out. He projects as a good free throw shooter and someone who can step out of the post and hit a jump shot.

When Okafor needs to move away from the paint to free up room for his guards, he can knock down a jumper. When the offense needs two points in a pinch, just dump it into him on the block. Given where his skill level is already, it's easy to get carried away with where Okafor may be in a few years. He's the most impressive offensive big man to come out of the high school ranks in this country in some time.

Okafor is widely considered a high-character player. He watched his mother die from bronchitis as a 9-year-old, an event that shaped his worldview and one he credits for making him serious about basketball. He's the latest in a long line of Duke commits out of Chicago, joining Parker, Jon Scheyer, Sean Dockery, Corey Maggette and Michael Thompson as recent McDonald's All-Americans who chose to play for Coach K.

More importantly, Okafor will spend his one year in college with point guard Tyus Jones, a consensus top-five national recruit from Minnesota. This was perhaps the biggest package deal in NCAA history, an agreement from two friends hailing from different states without much historical precedence. The formation of the Miami Heat in 2010 showed good players want to play with other good players, and it makes sense it's having a trickle-down effect to the high school level. If you're only going to play basketball for free for one more year, you might as well give yourself a great chance to win a championship.

Okafor will have that chance. Parker has only played one nationally televised game for Duke so far, but it already created a huge stir. Okafor should find himself in a similar position one year from now. What Chicago already knows, the rest of the country is about to learn. Jahlil Okafor won't be the last star basketball player to come from Chicago, he's only the latest.

• Who will go No. 1: Jabari Parker or Andrew Wiggins?

• A night at The Convention with Wiggins, Parker and Randle