It's finally here. We are now just a few short hours away from the beginning of what could be one of the best college basketball seasons ever played.

Share All sharing options for: Why the 2013-14 college basketball season should be one of the best ever

It's always amazing to me just how quickly the start of a season makes everything that happened over the course of the preceding five or six months feel like it was a decade ago. One dribble, one pitch or one snap, and all the bickering, all the debating and all the predicting ceases to matter.

When leather meets hardwood for the first time this afternoon (Eastern Michigan/Albion at noon!) it will wipe away an entire half-year of conversation that seemed important at the time. From this point forward, the only time we'll hear about a preseason prediction will be when the predictor needlessly resuscitates one because they were ultimately proven correct. And even then, no one will really be paying attention.

Though the preseason is about to go the way of the dodo, the saber-toothed tiger and "The Killing," it's still worth noting that, on paper at least, we appear to be on the precipice of one of the best college basketball seasons in recent memory.

Why? I'm beyond thrilled that you asked.

Most experts will tell you that the incoming class of freshman is the best in the seven years since the inception of the so-called "one and done rule." College hoops has been loaded with frosh talent since 2006-07, it's just never been this abundant and this accompanied by proven veterans with corresponding star power. A quick glance at the preseason AP All-America team tells the abbreviated story pretty accurately.

There's Russ Smith, the must-watch senior guard who led Louisville in scoring last season when the Cardinals won their first national championship since 1986. There's fellow senior Doug McDermott, a two-time first team preseason AND postseason All-American whose team has suddenly gone from darling mid-major to member of the (by name at least) most storied conference in college basketball.

Oklahoma State's Marcus Smart has been the near-unaninmous choice for preseason player of the year, and with good reason. The sophomore would have undoubtedly been a top five choice in last summer's NBA Draft, making his decision to return to college one of the most surprising of the past decade. Michigan's Mitch McGary represents the "predicted breakout star" faction. He was an above average player for the bulk of his freshman campaign before becoming a bon-a-fide force in the paint during the Wolverines' run to the national title game.

Then there's Andrew Wiggins, just the second freshman ever to earn preseason All-America accolades from the Associated Press. When you read recruiting quotes about Wiggins from the past couple of years, you feel like you're reading something that will be in an autobiography or hearing something that will be on an ESPN "30 for 30" one day. He's widely-regarded as the best 19-year-old basketball player since LeBron James, and is the face of a 2014 draft class that NBA junkies say could rank right up there with the vaunted 1984, 2003 and 1996 classes.

The ironic thing about Wiggins being compared to LeBron so much is that another kid in his class received the same courtesy, except his came on the cover of Sports Illustrated. That would be Duke's Jabari Parker, whom you might remember in this light: 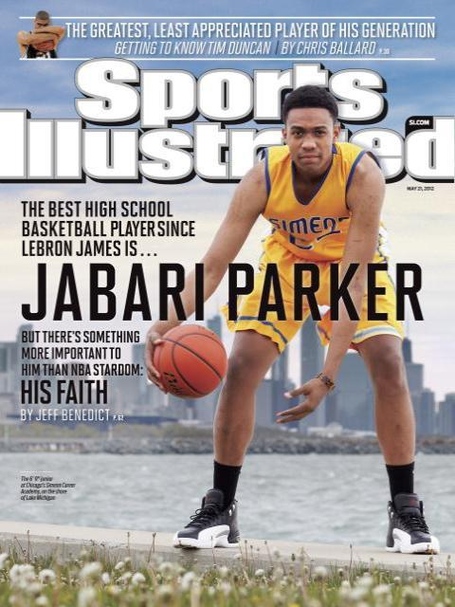 Eliminating any potential talk of a Magic/Bird-esque rivalry between these two is the existence of Kentucky's Julius Randle. He doesn't have the magazine cover credentials of Wiggins or Parker, just the body of an updated version of Micaelangelo's David and a game that a decent chunk of folks believe will make him, not Wiggins, the No. 1 pick come June.

The most refreshing thing about this crop of elite frosh - which also includes the likes of Arizona's Aaron Gordon and Kentucky's Andrew Harrison - is that its headliners are all playing for perennial powerhouses with legitimate national title aspirations. There is no Kevin Durant at Texas or Michael Beasley at Kansas State situation. Even the Shabazz Muhammad show at UCLA last season became more about the head coach's lack of job security than the Bruins' chances of making a deep run in the big dance (they didn't).

Before they become millionaires, the biggest names of college basketball's freshman class are going to have to find a way to fit in on star-studded teams with fan bases that are all hungry for the sport's top prize. It's fun, it's exciting and it's refreshing.

The Kentucky/Louisville basketball rivalry was already one of the most hate-filled in all of sports before former Wildcat front-man Rick Pitino returned to the Commonwealth to coach UK's arch-rival. Before Pitino rival and clone John Calipari replaced Billy Gillispie in Lexington. Before the pair met in the 2012 Final Four, and before they became college basketball's last two national champions.

Now, with Kentucky headlining both major preseason polls and Louisville just two spots behind them, it feels like the latest and perhaps most intense chapter of this Bluegrass rivalry is headed for a climax.

While Red vs. Blue has always been almost as much about the conflicting cultures of the two fan bases as it has been about basketball, it's been fascinating to see the rivalry spawn a pair of dueling philosophies in recent years.

Three years ago, Kentucky fans took Pitino's "Louisville First" slogan as a direct response to Calipari and the success he was having at UK with his "one and done" philosophy. Now that Louisville has won a national title doing things Pitino's way, Calipari has responded by writing a book titled Players First: Success from the Inside Out, which focuses on his belief that a coach should put a player's future ahead of both team and program success.

In a weird way, the annual December showdown between the Cats and the Cards could mean less this year than ever before.

While "Louisville First" vs. "Players First" may not be quite as simple as Louisville vs. Kentucky, it's silly to dismiss the notion that the rivalry isn't the primary fuel here. Each coach thinks they have a hook that is superior to the other's, and they're going to play it up appropriately.

It's difficult to envision this rivalry growing more intense than it stands at the current moment. Though the war of words has died down considerably over the past year and-a-half, you still have two coaches who allegedly don't care for one another and who have taken indirect public shots at one another in the recent past. The Internet and social media in particular have also helped make the relationships between the two fan bases more contentious than ever before...which is saying something. And then of course there's the fact that the programs are experiencing a contemporaneous level of on-court success that is unprecedented.

In a weird way, the annual December showdown between the Cats and the Cards could mean less this year than ever before, because there will be a strong notion among both fan bases that it might not be the last time they'll see each other. Not that we won't be watching anyway.

For the average sports fan, the college basketball season doesn't really begin until after the NFL has crowned its Super Bowl champion. That person is going to be missing out on a lot over the next couple of months.

It gets started quickly, like, four days away quickly. That's when ESPN's annual tip-off marathon culminates with the Champions Classic in Chicago, an event that will feature No. 4 Duke vs No. 5 Kansas and No. 1 Kentucky vs. No. 2 Michigan State.

Holiday hoops are criminally underrated, and that will be more apparent in 2013 than it's ever been before.

So many more angry coach GIF memories to be made.

College basketball's major narrative with regards to conference realignment has always been centered around how football and greed has ruined some of its longest and most storied rivalries. The flip-side of that is that seeing all these powerhouse programs in new conferences with other new powerhouse programs is pretty fun.

Syracuse vs. Duke in an ACC showdown at the Carrier Dome? Fun. Big East stalwarts joining up with some of the best mid-level programs in the country for a conference title race? Fun. Temple, Memphis and Connecticut somehow all playing in the same league? At least kind of fun.

The positive might not outweigh the negative here (it doesn't), but at least there is some good to have fun with.

Seven of the top 15 scorers in the country from the 2012-13 season are back for another year of lighting up the college ranks. All seven of those players averaged more than 20 points per game last season, and two of them (Creighton's Doug McDermott and Oakland's Travis Bader) ranked in the top five nationally.

Your top 10 leading returning scorers for this season:

Of particular note on this list are guys like Bader and Haws, who don't have all that much around them and will likely be asked to shoulder even more of the scoring load this season than in years past. Then of course there's Marshall Henderson, a mild-mannered kid who just goes about his business, producing quiet 20-point game after quiet 20-point game, never ruffling any feathers or drawing any attention to himself.

While the NCAA's attempt to limit hand-checking and create more space on offense could result in a bevy of 60+ free-throw games during the early portion of the season, I'm confident the rule changes will ultimately be a positive for the sport. Watching a guy like Michael Carter-Williams thrive with the ball in his hands in the NBA should be all the evidence anyone needs to realize that college basketball needs to create an environment more conducive to the talents of its most capable players. 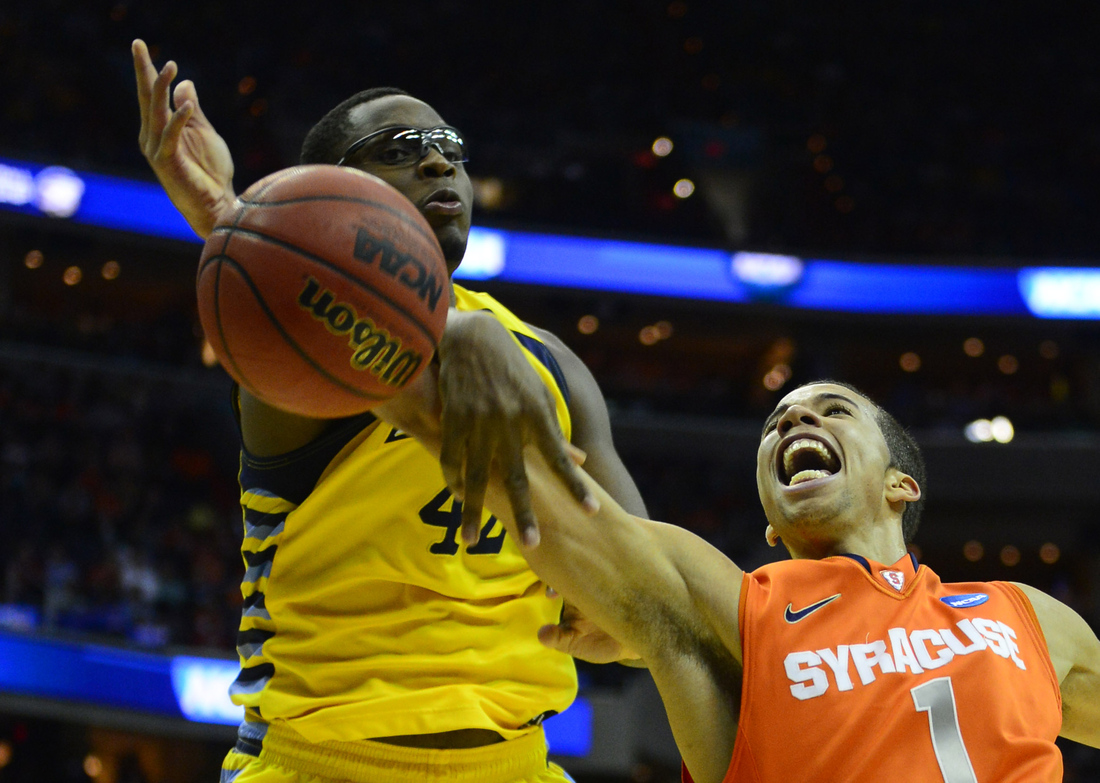 In years past, officials have typically used early season tournaments and standard non-conference games to drive home offseason rule changes. Hoops heads should expect more of the same this November and December. The "clutching and grabbing" problem probably can't be fixed in one season, but I don't think there's any question that this is a giant step in the right direction.

Come February and March I think you'll see a brand of college basketball with more offensive flow and more space for the sport's best players to showcase their skills. It's a necessary change.

For the first time since the NCAA Tournament Selection Committee started naming its "No. 1 overall seed," that top dog has gone on to claim the national championship in back-to-back seasons. Both of those teams - Louisville last season and Kentucky the year before - began their respective seasons ranked in the top two of both major polls.

While the strength of the nation's top 10-15 teams probably makes any declaration that the sport's title race is "wide open" a mischaracterization, the curiosity surrounding the preseason No. 1 definitely implies some uncertainty surrounding which team should be seen as the most likely to cut down the nets in Dallas. Though no one doubts the strength of John Calipari's 2013 recruiting haul, Kentucky is still the first preseason No. 1 ever to have missed the NCAA Tournament the year before. To drive the point home further, the Wildcats are also the first preseason No. 1 since 2001 that didn't make the Sweet 16 the season before.

We've all spent the past seven months trying to come up with responses to questions we couldn't possibly know the answers to. Thankfully, those answers begin flowing in today and tonight.

• It's never too early for Bracketology

• The march toward midnight: All Cinderellas are not created equal