The story of Champion Baptist, who trailed Southern 44-0 and lost by 104

This game counts in the Division-I standings as a basketball game. It should not.

Share All sharing options for: The story of Champion Baptist, who trailed Southern 44-0 and lost by 104

A few weeks ago, we profiled our favorite names from the non-DI ranks. One of these was Champion Baptist College, who had already proven their non-Champion status by getting pasted 108-54 by Southeastern Louisiana and 108-48 by Mississippi Valley State.

However, Monday night, they outdid themselves: 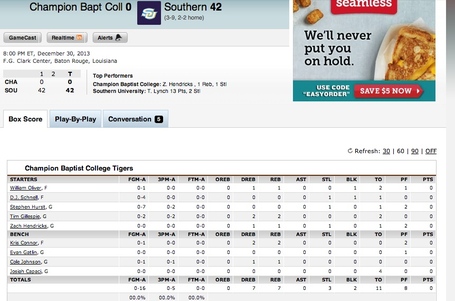 Look closely: 0-for-16 from the field, 11 turnovers, while the other team had 42 damn points. This is cruel. And it's crueler that they are called "Champion," but we'll let that slide.

They'd go on to trail 44-0. According to Ken Pomeroy, this was the largest opening deficit of all time:

For some reason, in the midst of a 41-0 run, Southern called timeout. Roman Banks still coaching ‘em up.

(Yes, that's from somebody who was at the game. She felt pity.)

I promise I feel bad we're winning by this much. Everyone has been clapping for CB each time they score. I just want to cook them some gumbo

Southern is not a particularly good basketball team. On Pomeroy's site, the Jaguars are ranked No. 256 out of 351 teams. In fact, they are the sixth-ranked of seven teams with the word "Southern" in their name (Southern Miss, Charleston Southern, Texas Southern, Southern Illinois, Georgia Southern). They only have one win against Division I competition this year, an 87-78 win over North Florida.

But they are monumentally better than Champion Baptist. Here is what we could find out about Champion:

- Their website doesn't load and they don't have a Wikipedia page

Are u interested in playing basketball or volleyball for the Champion Tigers? Call 501-623-2272 for more information on our sports programs!

- The person that Twitter says is the school's president, Eric Capaci, is also listed as the school's head basketball coach according to pretty much the only page that acknowledged that they have a basketball team, and his Twitter says he's a coach, so, yeah, that seems like it's a thing.

- They are a member of the Association of Christian College Athletics, which is not in the same organizational tree as the NCAA. But the level appears to be, um, kind of low. It's probably considerably below D-2 or D-3.

- The link above tells us the school's enrollment is 250. So one in every 25-ish students is on the hoops team, we'd presume.

We don't want to bring shame to Champion Baptist. They played this game, and probably got paid for it, and tried their best. They just aren't very good at basketball. We aren't either, and we can't judge.

We mean to point out that YO THEY TOTALLY SHOULDN'T BE ALLOWED TO PLAY AGAINST A D-I TEAM IN A GAME THAT COUNTS IN THE STANDINGS. Southern probably shouldn't be allowed to schedule them in the first place, but certainly not in a game that isn't considered an exhibition. These teams are on totally different playing fields, and they're that way for a reason.