No. 1 Michigan taking on No. 3 Indiana is the obvious headliner, but the action leading up to the top five showdown - which includes top 20 battles between NC State and Miami and Ole Miss and Florida - figures to be almost as good.

There might not be a better Saturday this year to do absolutely nothing productive.

Allow me to tell you why.

The Bearcats overcame a 10-point deficit to defeat Rutgers earlier this week, but the play (and actions) of senior guard Cashmere Wright were still concerning. Wright, who is just 3-of-19 from the field since returning to the floor after suffering a knee injury, scored just six point against the Scarlet Knight, and appeared to exchange angry words on the sidelines with head coach Mick Cronin at one point. Sean Kilpatrick has picked up the slack, but the Bearcats need Wright at or near his best if they want to evolve into a Sweet 16/Elite Eight caliber team.

No. 6 Syracuse at Pittsburgh (Noon/ESPN)

The Oakland Zoo waiting for the Petersen Events Center to open its (inside) doors approximately 4.5 hours before tip: 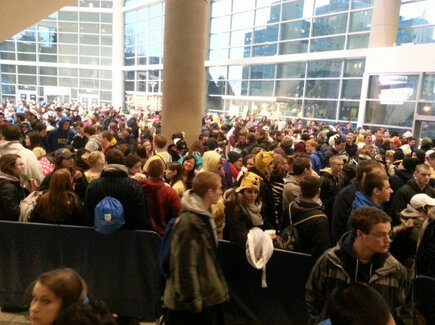 Suffice it to say the young folks are excited about their shot at a victory over a top 10 rival this chilly Saturday morning.

A battle of teams that were crushed on Wednesday night by the two teams playing in tonight's showcase game. Hammer and Rails says this is a "crossroads game" for the Boilermakers.

Isaiah Canaan and Ed Daniel have absolutely killed Austin Peay throughout the course of their Racer career. Don't expect this afternoon to be much different, as the Govs enter today 0-9 on the road this season.

Mizzou will attempt to bounce back from its painful loss to LSU by improving to 13-0 at home this season. Though Auburn comes into the game just 8-12 overall, seven of the Tigers' 12 losses have been one possession games in the final minute. This game will also mark the first time Missouri guard Earnest Ross has squared off against his former team.

Duke will look to keep hold of second place in the ACC by beating a Florida State team that could desperately use its first win over a ranked opponent. If the game is close in the final seconds, the Blue Devils might want to make sure to put a body on No. 21.

Crazy fact: Following its overtime loss to St. John's on Wednesday, DePaul has now lost 98 of its last 100 Big East regular season games. That's not true, but you kinda believed it for a second, right? DePaul is bad.

SLU has to put the memory of its win over No. 9 Butler - the Bilikens' first win over a top 10 opponent in nearly a decade - behind it if it wants to avoid a letdown today against a Dayton team that needs a big-time win. Handling the success of big wins was not something Saint Louis did well a season ago, a point best exemplified by their consolidating a huge 73-68 win over Xavier with a 13-point loss to Massachusetts.

Memphis is 70-3 in Conference USA home games since Louisville, Cincinnati, Marquette and company left for the Bih East following the 2004-05 season. Tulsa notched one of those three victories exactly two years ago today, a 68-65 triumph.

Utah really picked an awful time to have a down period as a program. Six or seven years ago it was almost unfathomable to think about the Utes struggling so mightily in an average(?) Pac-12.

The NEC is one of the most competitive conferences in America, with four teams in a second-place logjam a 6-3. Te Colonials and Blackbirds are two of those squads trying to stay a game back of, or pull even with, 7-2 Bryant.

The college basketball world hasn't seemed to take notice, but St. John's is suddenly one of only three teams in the Big East with six conference wins. They'll look for revenge today against a Georgetown team that ran them out of Madison Square Garden (67-51) on Jan. 12. That game wasn't nearly as close as the final score would indicate. The game is the first of a brutal stretch for the Johnnies, who host Connecticut before traveling to No. 6 Syracuse and No. 12 Louisville.

The first of three games featuring two top 20 teams is sullied a little bit by the news that NC State point guard Lorenzo Brown is unlikely to play because of an injured left ankle. The Pack could certainly use him against a Miami team that is the first ACC team since 1981 other than Duke or North Carolina to start conference play 7-0. Despite the fact that it didn't work especially well against Virginia, expect Rodney Purvis to slide over to the one spot and attempt to fill the monster hole left behind by Brown.

These two teams are a combined 0-12 on the road. Smart money is on Mike Anderson's team here.

The Shockers have to shake off the sting of Tuesday's loss to Indiana State if they want to keep pace with Creighton at the top of the MVC standings. Northern Iowa is a better team than its 4-6 league record suggests, and the McLeod Center figures to be electric for this nationally televised game.

I got lit up by a trio of Rhode Island fans after referring to the Rams as "not very good" in last Saturday's viewing guide. In an attempt to make amends, allow me to say this: Rhode Island very well might be the best 6-13 team in college basketball.

Oklahoma State at No. 2 Kansas (4 p.m./YES/MASN/Altitude)

Teams looking to exorcise road demons is quickly becoming the theme of the day. Oklahoma State, which currently sports an 0-4 record in true road games, is the latest example in this tour of futility. If the Cowboys can somehow get off the snide today and shock the Jayhawks, it would do wonders for Marcus Smart's All-American and Freshman of the Year campaigns.

The Ducks are looking for a big bounce back win after their embarrassing 76-52 loss to Stanford on Wednesday. The bad news is they'll be without injured freshman point guard Dominic Artis for a third straight game.

The final two MAC unbeatens square off in the first of two showdowns between the in-state rivals. Hustle Belt has you covered all the things you need to be watching out for.

Elston Turner dropped 40 on the Cats in an Aggie victory on Jan. 12. Pretty confident John Calipari has made his guys aware of that. Playing Texas A&M now is actually probably the best possible situation for the young Wildcats, who have no excuse for a letdown after their huge win over Ole Miss.

Oklahoma outrebounded K-State 39-25 in their first meeting on Jan. 19, but lost the game because they doubled up the Wildcats (16-8) in turnovers. If the Sooners take care of the ball they should have an extremely good shot at pulling off the mild upset of yet another Big 12 team that has trouble winning on the road.

Princeton and Harvard are the only Ivies who remain undefeated after two weeks of conference play. The Tigers will look to keep it that way by holding serve against 1-2 Columbia.

You'll be hard-pressed to find a more intense game than this one, as these two Big Five rivals both find themselves in the middle of the A-10 standings and firmly on the NCAA Tournament bubble.

Xavier's win over rival Dayton earlier this week has the Musketeers tied atop the A-10 standings with VCU. Those two teams own a half-game advantage over Butler, Charlotte, Saint Louis, Massachusetts and George Washington. That's right, there SEVEN teams in this conference with two losses. You could rank teams 1-12 in the A-10 by drawing out of a hat, and it would be hard for anyone to legitimately object to the results.

There is all sorts of intrigue surrounding this one. Ole Miss and Marshall Henderson flopped in their first real showcase game against Kentucky on Tuesday, and the "pretender" talk will really heat up if they don't at least stay competitive with the Gators. Florida, meanwhile, is 7-0 in the SEC and has won four of those games by more than 30 points. No one should expect Kenny Boynton to keep beating conference foes by these ridiculous margins...but it's really interesting to see if they can.

The Buckeyes opened Big Ten play with a 70-44 thumping of Nebraska back on Jan. 2. This one should be closer, not a lot closer, but closer.

No one in college basketball needs a win more than Wyoming, which is seeing its NCAA Tournament dreams slip away thanks to a 2-5 start in Mountain West play. Playing on the road against a 17-4 Colorado State team that is really hitting its stride isn't exactly an ideal scenario for that to happen.

The Sycamores have quietly built a resume that includes wins over Miami, Ole Miss and Wichita State. These are the types of games where they can't afford to slip up if they want to become the third team in the MVC to go dancing.

Hilton Magic has hit fewer programs harder than Baylor, which is 0-10 all-time at Iowa State. The Cyclones have won 18 straight games at home, good for the eighth longest streak in the country.

On paper, this a classic mismatch. New Mexico is far too physical and far too apt at creating turnovers for the mistake-prone and somewhat soft Wolf Pack to keep pace.

The Huskies have dropped four straight, including a deflating loss to Arizona on Thursday. The amount of effort and emphasis that Washington placed on that game figures to set up well for an Arizona State squad that still has realistic dreams of an at-large bid.

No need to tell you a bunch of things you already know, this is the game of the season so far. Assembly Hall is going to be electric which makes Indiana the safe bet here, but I'm going with the better team, and I think that's Michigan. Give me the Wolverines in a thriller, 77-76.

This, conversely, will not be a thriller. The Zags continue their roll through the WCC.