Who likes the fast break? And who does not? A look at the contrasting transition styles of America's top 10 teams.

Share All sharing options for: The transition offense of college basketball's top 10 teams

The contrast of styles among teams is part of what makes college basketball so much fun. There are 347 teams in Division I, and each one plays differently. There isn't one "right" way to play basketball, as teams have success with all sorts of styles.

While there are many aspects to styles of play, tempo is perhaps the most striking. Even among the very best teams in the nation, there are substantial differences in just how much teams look to score on the fast break. For example, the up-tempo Indiana Hoosiers and the more half-court focused Florida Gators have two of the best offenses in college hoops. 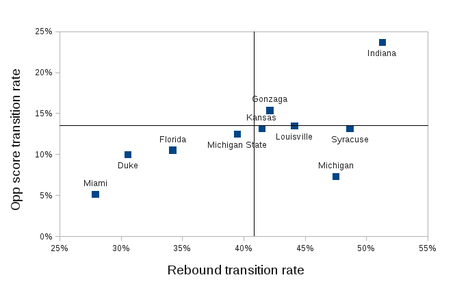 The remaining top 10 teams fall somewhere in the middle between the extremes of Indiana and Miami. For the most part, teams that look to run after a rebound are also more likely to shoot quickly after an opponent make. One exception to this trend is Michigan. The Wolverines aggressively push tempo after a rebound, but seldom shoot quickly after their opponent scores.

What happens on those transition shots is also important. The plot below summarizes how each of the top ten teams do in non-steal transition situations, as well as in situations where they must rely on their half-court offense. To evaluate the shooting percentages in half-court situations, I have included initial shots of a possession that occurred either more than ten seconds into a possession or at any point in a possession after a dead ball turnover. The plot below shows each team's effective field goal percentage in transition and in the half-court. Division I averages are indicated by the horizontal and vertical lines. 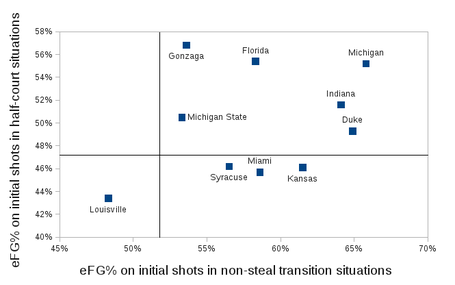 Louisville stands out in that figure, with below average effective field goal percentages both in the half-court and in non-steal transition possessions. This figure presents an unfairly negative view of the Louisville offense, but there are a couple of things to keep in mind. First, this figure does not include transition opportunities that come off of steals and Louisville steals the ball a lot. Fourteen percent of Louisville's initial shots are transition attempts after a steal, and Rick Pitino's team has an effective field goal percentage of 72 percent in these situations. Additionally, the Cardinals are also very good at avoiding turnovers and getting offensive rebounds, both of which help the offense, but neither of which directly affect shooting percentages. On the whole, Louisville's offense is good, but the plot above highlights things that the Cardinals do poorly.

Gonzaga is the only top 10 team that actually has a higher effective field goal percentage in half-court situations than it does in non-steal transition possessions. Gonzaga works hard on offense to get the ball inside, with just under a third of their initial shot attempts in half-court situations coming at the rim, compared with the national average of 27 percent. Mark Few's team is smart to get the ball inside, considering that they have made 70 percent of their attempts at the rim this season, which is one of the ten highest shooting percentages at the rim in the nation.

Michigan's offense is great in both half-court and in transition, while teams like Kansas would probably benefit if they could get out and run more. Kansas runs off of rebounds at a rate near the national average. The Kansas defense is so good that a high proportion of their initial shots come after defensive rebounds; 41 percent of Jayhawk initial shots come in possessions after rebounding an opponent miss, compared with a national average of 34 percent. With such a good defense and a relatively high conversion rate in transition, Kansas would likely benefit more by speeding up the tempo than would most other top teams. A great defense combined with an aggressive and successful fast break can be a winning formula -- just ask the 2012 Kentucky Wildcats.

As you watch games the rest of the year, try to keep in mind just how much this battle over tempo affects the outcome of a game. For example, slowing down Indiana's fast break could make a big difference for a team looking to pull an upset. Of course, that is probably easier said than done.