Indiana won the Big Ten Championship in a thriller at Michigan on Sunday, and Michigan lost in the most heartbreaking way possible. Relive the scene from Ann Arbor, because Sunday was just the beginning.

ANN ARBOR, Mich. -- Michigan fans are walking back to campus after the game. "Of all the depressing games I've attended," one of them says, "That's gotta be top five."

"That's gotta be number one," someone else adds.

Wherever it actually ranks, it's never a good sign when you're walking out of a stadium measuring a game next to the most depressing sporting events you've ever seen. But that's where we were Sunday night in Ann Arbor. This was historically awful. 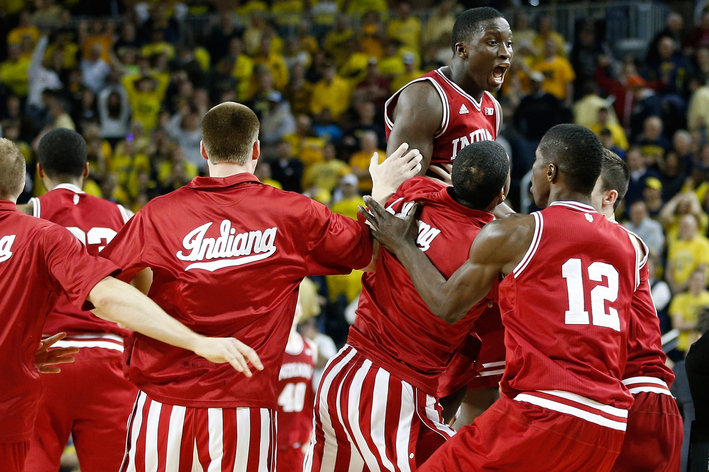 A few days before, a reporter asked Michigan guard Trey Burke whether he deserves to be Big Ten player of the year. "That would definitely be a lovely accomplishment," he said then, "But I feel like, if we're winning -- I think it'll come down to Sunday, honestly."

Sunday was Senior Night at the Crisler Center in Ann Arbor, with No. 2 Indiana in town and a Big Ten title on the line. But as Michigan honored student managers and bench-warming seniors beforehand, it was left unsaid that Sunday was also almost definitely the last home game Trey Burke would ever play at Michigan.

For those who don't know, Burke's the 6'0 (or maybe more like 5'10-ish) guard from Columbus, Ohio who got passed over by Ohio State, landed at Michigan, and became a superstar out of nowhere as a freshman last year. This year he came back to average 19.1 PPG and 6.9 assists for a Michigan team that's been in the Top 10 all season.

Teams have smaller windows to contend in today's college hoops world, and thanks in large part to Trey Burke, this year is Michigan's best shot in a long time. Next year the superstar they lucked into will leave for the NBA and who knows what happens from there.

So that's why Sunday mattered more than most Senior Nights at Michigan. 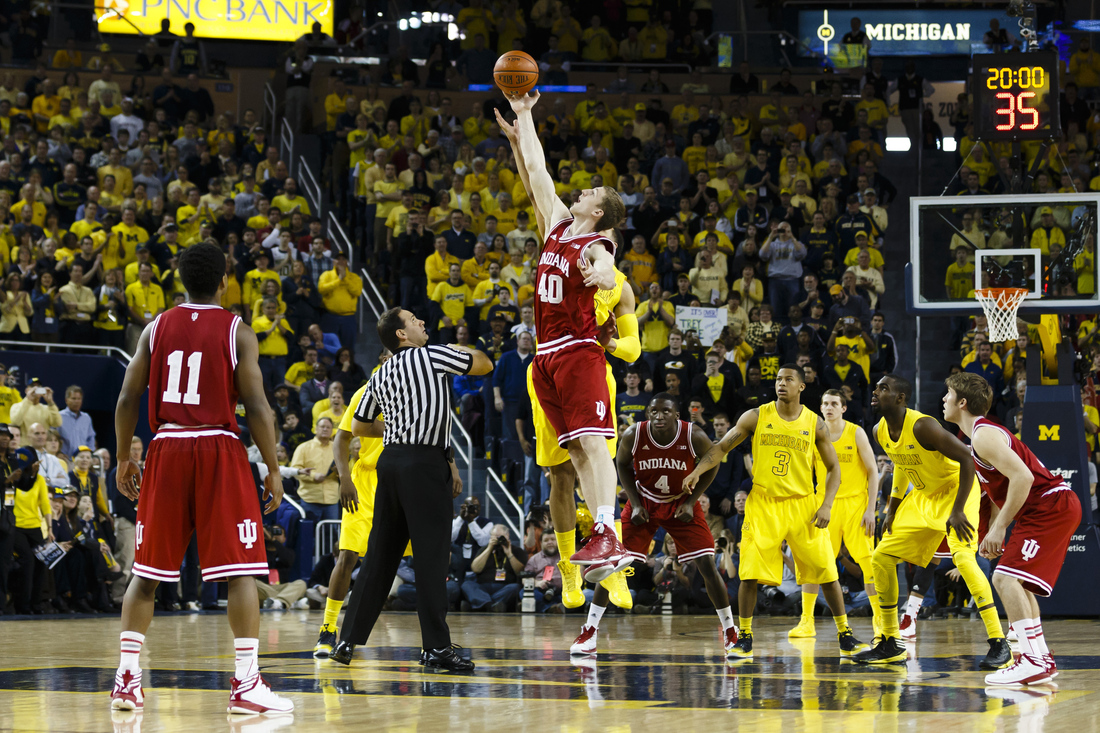 Indiana's a better team, all things considered. Or at least more talented in the traditional sense. They've got Cody Zeller, the most polished big man in the country, Victor Oladipo at guard, himself a candidate for National Player of the Year, and a handful of role players who aren't exactly great but are pretty much perfect for college basketball.

The Hoosiers jumped out to an early 10-3 lead in the first five minutes or so, but then Nik Stauskas -- a Canadian freshman with a killer jumpshot who's also pretty perfect for college basketball -- brought Michigan back with a pair of threes. On the second one the 6'6 freshman from Canada turned around and stared down Tom Crean, the Crisler Center went apeshit, and after a season of mostly ignoring college basketball I remembered why this can sometimes feel like the best sport on earth.

The fans at Crisler were as loud as any college stadium I've been to this side of Rupp Arena--Kentucky fans have their own special category of insanity--and the teams on the court kept living up to the atmosphere. Every time Michigan looked ready to pull away, Indiana would claw back, and they'd go back and forth for another 10 minutes, repeating the whole process.

Which brings us to the final, insane minutes on Sunday.

It happened in 10 steps.

Plays like that have made him maybe the most valuable player in college basketball this year.

1. If Burke's the superstar people would notice first, Oladipo was just as deadly for Indiana. He harassed Michigan the entire afternoon, whether it was with blocks like this, or his insane 13 rebounds from the guard position, part of Indiana's 47-26 rebounding edge on the day. One play at the end was perfect. The score was tied at 64, Indiana came out of a timeout, and Michigan defended everything to perfection. With the shot clock approaching zero a Hoosier threw up a prayer over double coverage that didn't hit the net. Except that Oladipo snuck in behind two Michigan players to catch in and lay it in off the rebound. Little plays like that have made him maybe the most valuable player in college basketball this year. He didn't even play that well on Sunday, but you could still see what makes him great.

2. After Oladipo's layup, Michigan scores six unanswered to take a four-point lead into the final minute. This is when Indiana has to start fouling. So, Glenn Robinson got free for a breakaway dunk that should've given Michigan a six-point lead, Indiana's Christian Watford hacks him from behind to prevent the easy bucket.

Rule 4, Sect 29, Art. 2c: Flagrant 1 is called when "pushing a player from behind to prevent a score." I don't see how this is arguable.

Watford clearly pushed him in the back, from behind, as part of a play to try to prevent a score. Refs reviewed it, chickened out. Poor.

4. A flagrant would have all but sealed the game, but Michigan couldn't get the call. Now here's where it gets excruciating. From there, Robinson misses one of the free throws, leaving Indiana down 5 with less than a minute left.

5. Next: Indiana scores, Tim Hardaway, Jr. misses the front end of a one-and-one, and after 20 seconds and four points from Cody Zeller, it's a one-point game. At this point the crowd is mildly terrified, but Michigan's still in control.

6. Then Burke gets fouled, and misses the front-end of another one-and-one, giving Indiana the ball with a chance to take the lead. Cue full-on Crisler panic mode.

7. Indiana scores after Cody Zeller gets yet another offensive board and turns it into a layup.

8. With no timeouts left, Burke sprints up the court, launches an awkward runner in the lane with Zeller on his back. It bounces off the back of the rim.

9. Jordan Morgan tips the rebound back at the rim. "JORDAN'S GOT IT," yells my friend next to me. 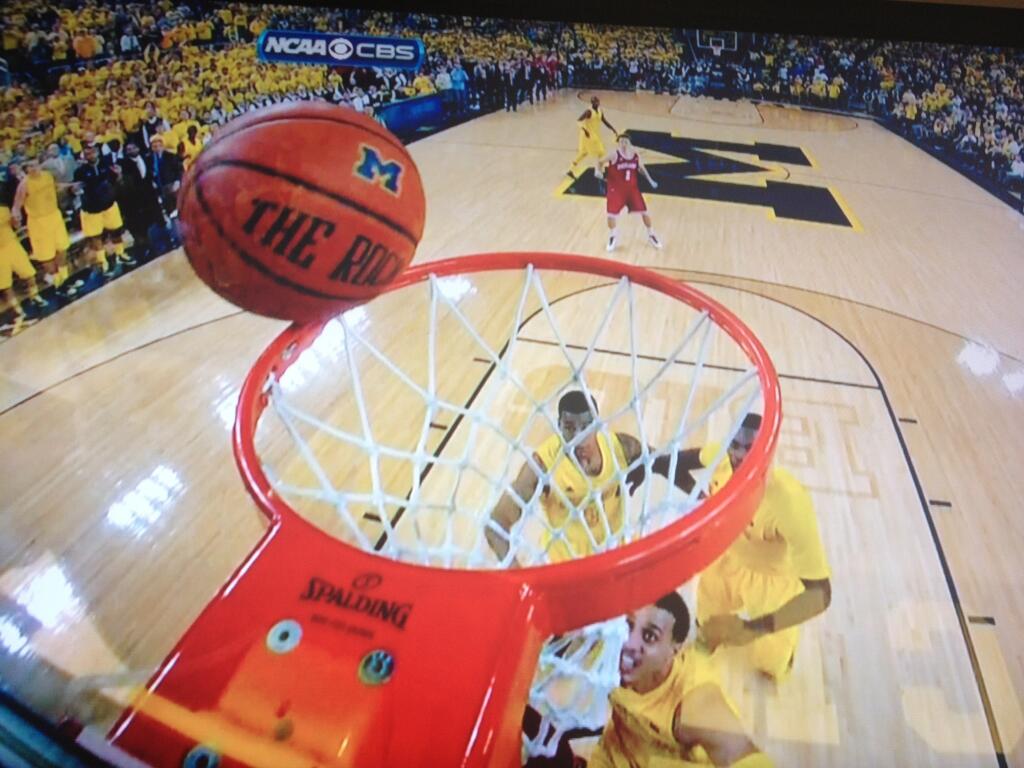 And then ... Nope. Indiana gets the rebound. Game over.

This was the perfect storm of awful for Michigan. Everything had to go wrong, and it did.

Everything had to go wrong, and it did.

Indiana coach Tom Crean started berating a Michigan assistant during the postgame handshakes, but nobody in the Crisler Center even noticed. Everyone was too busy cursing the missed free throws, the no-call on the flagrant, and getting the hell out of the stadium. The worst case scenario for sports fans involves a lot of silence interrupted only by muffled profanity and the sound of 13,000 people shuffling out of a crowded, suddenly miserable stadium.

There for the taking 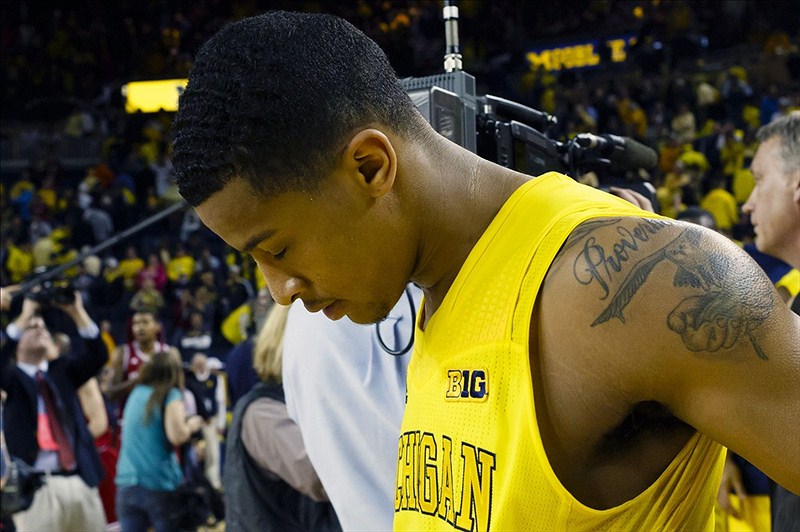 SB Nation's Michigan blog writes that the Big Ten Title was in the Wolverines' grasp, if only they could've made some free throws.

Both teams from Sunday have the chance to go deep in March. Indiana with a style that's efficient and deadly, Michigan with exactly the kind of seasoned, fearless point guard that takes teams a long way and a collection of explosive young stars surrounding him.

Trey Burke may have hurt his case for player of the year this weekend, but if Oladipo winds up winning the award after Sunday, Burke and Michigan still have plenty of opportunities to render it all irrelevant over the next few weeks.

So instead of some definitive statement on either team's season, watching Michigan fans go nuts and then go silent on Sunday was mostly just a reminder of the stakes going forward -- a roller coaster between tens of thousands of fans shouting at the top of their lungs, or walking home miserable and cursing about the refs, with one or two bounces and one or two calls making the difference. Then millions of interlopers like me, caught up living through one side or the other and riding the roller coaster just the same. This is not a healthy way to spend your time, but like most things that are unhealthy, it's pretty much irresistible.