It's the end of an era this week at Madison Square Garden, where favorites Georgetown and Louisville will both be playing for a title and a No. 1 seed in the NCAA Tournament.

For over three decades, the Big East has been home to the premier conference tournament in all of college basketball. The tournament became the spectacle it is now because it offered everything: larger than life coaches, some of the nation's best players, playing on some of the nation's best teams, and all of it happening in the world's most famous sports arena, Madison Square Garden.

Conference realignment has laid waste to the Big East and the Big East Tournament as we know them. With that as the background, the event will tip off tomorrow for one final, bittersweet time. As has been the case in previous years, there will be plenty of star players and coaches that to make it every bit as good as it has ever been.

The Big East Tournament winner has reached the Final Four in each of the past three seasons. This year, Louisville and Georgetown, the tournament's top two seeds, figure to be top seeds in their respective NCAA Tournament regions and Final Four contenders again. The past two years, Louisville and Connecticut limped through the final six weeks of the regular season, only to use a run to the Big East Tournament title as a springboard to a Final Four run (and national title, in Connecticut's case). Syracuse has struggled in February and March, but with a talented roster, could benefit from a confidence boosting week in the Garden. Likewise, Top 25 teams like Pittsburgh, Marquette, or even Notre Dame, could use a successful week to improve tournament seeding and perhaps equal the surprise runs previous Big East Tournament champions have made.

Three teams finished in a tie for the Big East title, but most agree that there are two favorites to win the Big East Tournament, and there isn't much to differentiate them.

Both Louisville and Georgetown finished the year 14-4 in in Big East play. They also went a combined 2-1 against fellow co-champ Marquette. When the Cardinals and Hoyas met back in January, Georgetown held Louisville on two possessions with under a minute to play to escape with a 53-51 win. The two enter the tournament playing as well as they've played all year. Louisville rattled off seven straight wins to finish the season, including a 16-point win over Notre Dame on senior day. Georgetown, meanwhile, finished the season 12-1, and in the final meeting with rival Syracuse as Big East members, routed the Orange 61-39.

While other teams are capable of winning, these two teams enter as favorites and are playing their best basketball of the season at just the right time.

Could the Orange be this year's Louisville or UConn?

Georgetown and Louisville might be the favorites, but they did lose a combined eight Big East games, which means there are teams capable of beating them on any given night.

Marquette won a share of the Big East title, and could find itself in the semifinals with a chance to avenge an 18-point loss at Louisville. Syracuse limped down the stretch this season, but was one of the only teams in the nation to win at Arkansas and Louisville. Could the Orange be this year's Louisville or UConn? Shaking off a rough final six weeks of the season in The Garden? Finally, Pittsburgh beat Georgetown and Syracuse this season, while losing by just three at Louisville in early February. The Panthers have a veteran lineup and a quality low-post player in Steven Adams that will make them a difficult out both in their final trip to the Big East Tournament, but also the NCAA Tournament.

Teams That Can Help Themselves

The best part about being in a league that finished with six teams ranked in the AP Top 25 is that racking up a few wins in a few days can get you into the Tournament, or if you're already in, improve your seeding possibilities.

As of now, Villanova is probably in the field of 68. Jay Wright's club has notched wins over Louisville, Georgetown, Syracuse, and Marquette this year. Still, just to be able to relax, they need to at least not stumble over a shorthanded St. John's team on Wednesday. If they avoid that, they'll get a rematch with the Louisville team they upset earlier this season.

Cincinnati is in the same boat as Villanova. Probably in the tournament as of now, but could use at least one win to be able to sleep the night before Selection Sunday. The Bearcats have wins over Oregon and Alabama in the non-conference slate, and have wins over Pittsburgh and Marquette in Big East play. Still, they're not a lock if they drop their Wednesday game against Providence. Win there, and they should be assured a spot in the Tournament, with a shot at top-seed Georgetown the following night.

In addition to the bubble teams, Louisville and Georgetown both have an opportunity to grab a No. 1 seed in the NCAA Tournament if they win the Big East Tournament. Both have strong resumes, and with Indiana, Duke, and Gonzaga likely snatching the top seeds in three of the regions, the fourth is open to the a number of teams. Getting three wins in the The Garden would likely boost their tournament profiles enough to get them a one seed above a potential second Big Ten team or even Kansas.

The Big East Tournament has never lacked for star players. Over the years, fans have enjoyed seeing the likes of Patrick Ewing, Allen Iverson, Ray Allen, Alonzo Mourning, Carmelo Anthony, and more recently the exploits of a one-man show like Kemba Walker. This year, there might not be many future NBA stars on display, but there are still plenty of talented players worth watching.

Otto Porter, Georgetown: The Hoyas would be lost without Porter, who, in the second half of the season, made a pretty good case for National Player of the Year consideration. Porter averaged 16 points and 7.5 rebounds per game on a team that rarely lit the scoreboard up on a nightly basis. He hit 44% of his three-point shot attempts and was even sixth in the Big East by averaging 2 assists per game. Georgetown goes as far as Otto Porter takes them. 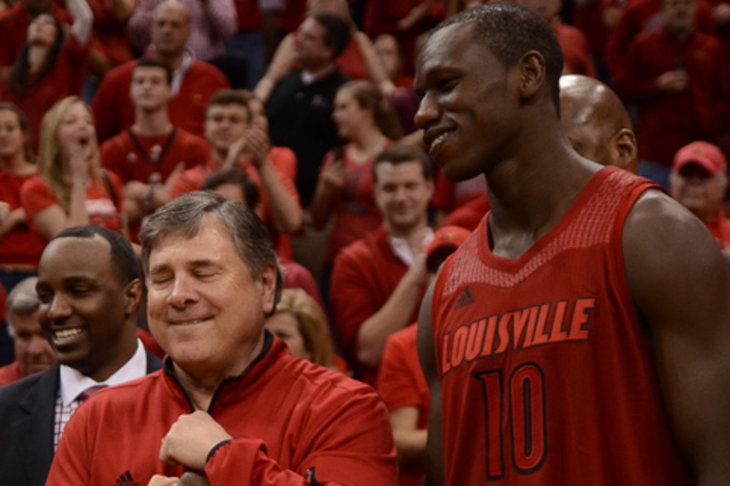 From Card Chronicle: A year after many thought he was robbed of the honor, Gorgui Dieng has been named Big East Defensive Player of the Year.

Gorgui Dieng, Louisville: The Big East Defensive Player of the Year came on strong after missing several weeks with a wrist injury. BY year's end, Dieng was not only a defensive presence (2.6 blocks per game), but was second in the league in rebounds per game while also developing a mid-range and post game that made Louisville's offense much harder to defend.

Russ Smith, Louisville: The only player in the country that drives both fans of the opposition as well as the fans of his own team absolutely crazy. Smith finished second in the conference in scoring, averaging just under 18 points per game while also snatching up two steals per game. His emergence makes Louisville a title contender, especially if he continues to play (mostly) under control.

Ryan Arcidiacono, Villanova: The precocious Villanova guard helped spark Villanova's improvement this season with his ability to score and his fearless attitude. Arcidiacono averaged 13 points per game and though just a freshman, became the team's floor-general from day one.

Syracuse's quartet of CJ Fair, Brandon Triche, James Southerland, and Michael Carter-Williams: The four alternated being the primary offensive weapon on a given night for the Orange, and it showed in the stats, as each finished in top 20 in the Big East in scoring. All four averaged in double figures in 2012-2013. The Orange offense struggled in the final few weeks of the season (scoring under 60 points in three of their final five games). They'll need these four to wake up to win in the final appearance for Syracuse in the Big East Tournament.