Of all the SEC's bubble teams, only one played Thursday. It won.

Share All sharing options for: SEC Tournament 2013 results and bracket: Volunteers move on in critical game

The 2013 SEC tournament finished up its second round Thursday, and one of the SEC's handful of bubble teams got a critical win to keep its season rolling toward a possible spot in the Big Dance.

LSU stormed out to a 39-19 halftime lead. Georgia was stunned and appeared asleep at the wheel, which would have been dangerous if the parking brake weren't on. But the Bulldogs woke up in the second half, jolted awake by Kentavious Caldwell-Pope, who finished with 32 points and 13 rebounds.

But it wasn't enough. Shavon Coleman led the Tigers with 24 points and Johnny O'Bryant hauled in a double-double (12 points, 12 rebounds). LSU will face the Florida Gators on Friday.

One of the conference's myriad bubble teams, the Vols had little trouble shrugging off the 10-22 Bulldogs. Jordan McRae led with 17 points, Trae Golden chipped in 15, and Jarnell Stokes hauled in nine rebounds.

Tennessee now takes on the No. 4-seeded Alabama Crimson Tide on Friday, another team on the bubble. That quarterfinals game could well put one team over the top and send one team to the NIT, though it's worth nothing SB Nation's Chris Dobbertean has Tennessee as one of the last four in and Alabama nowhere in the picture in his latest bracketology update, which reflects Thursday's games.

Scott Odom scored 20 points, Kyle Fuller added 19 and the team sank 12-of-28 from 3-point range. It was just enough to hold off a second-half rally from Arkansas, which trailed by as many as 14 in the first half but closed to within two points at 70-68 in the game's final 30 seconds. B.J. Young led the Razorbacks with 16 points, and Marshawn Powell grabbed nine rebounds. Vanderbilt will face the Kentucky Wildcats in the quarterfinals.

The loss all but extinguished Arkansas' NCAA tourney hopes. SB Nation's Chris Dobbertean has the Razorbacks nowhere to be found on his latest bracketology update.

Four Missouri players scored in double figures, and the Tigers coasted to a 62-50 win over Texas A&M. Of those four players, Alex Oriakhi led the Tigers with 13 points and 10 rebounds. Elston Turner, Texas A&M's All-SEC first-teamer, was 3-of-17 from the floor and finished with seven points.

Missouri is solidly in the NCAA tournament field, but a second loss of the season to lowly Texas A&M could have had a significant impact on its seeding. Missouri will play the third-seeded Mississippi Rebels on Friday, and the Rebels are the team that needs a win to bolster its hopes of qualifying for the Big Dance. 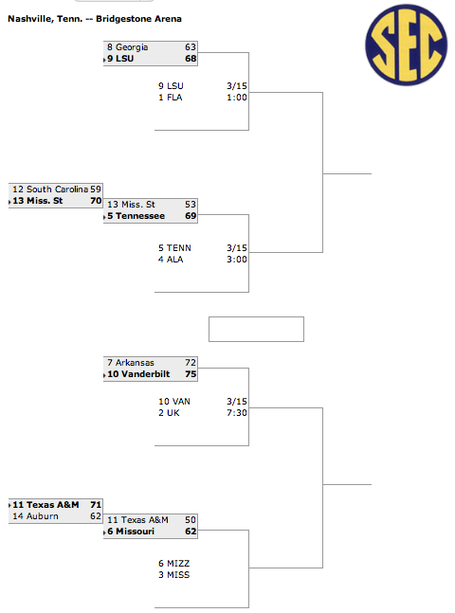