Top-seeded Miami is the first team to advance to the semifinals of the ACC Tournament after defeating Boston College on Friday afternoon.

The top teams in the ACC Tournament began their play on Friday in the quarterfinals and the Miami Hurricanes became the first team to move to the semifinals with a victory over Boston College.

Miami received a scare from Boston College as the game was tight until the last two minutes, when the Hurricanes pulled away to win, 69-58. Next up for Miami is either four-seed Virginia or five-seed N.C. State, who meet in a game that has plenty of NCAA Tournament implications. The Hurricanes will need to play better than they did on Friday if they hope to advance past either of those teams and into the championship.

On the other side of the bracket, second-seeded Duke is scheduled to take on seventh-seeded Maryland at 7 p.m. The Terrapins won the last meeting between the two, but Ryan Kelly was not available for the Blue Devils during that game. With Kelly in the lineup, Duke is undefeated this season.

The winner of that game will take on the winner of three-seed North Carolina and six-seed Florida State. Florida State defeated Clemson on Thursday night to advance to the quarterfinals, but lost both meetings with the Tarheels in the regular season.

The quarterfinals schedule can be found here and a complete bracket is available at theACC.com. 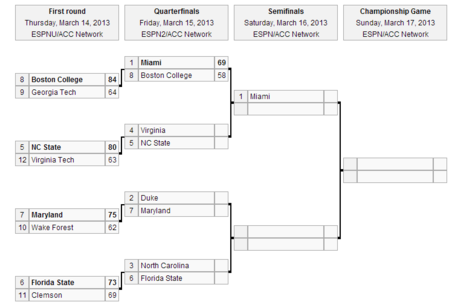