Top-seeded Florida kicked off quarterfinal play with a blowout victory of LSU in the SEC Tournament on Friday.

The quarterfinals of the SEC Tournament began on Friday, with the top-seeded Florida Gators destroying the ninth-seeded LSU Tigers to advance to the semifinals.

Erik Murphy had 27 points and 12 rebounds to lead the Gators, who dominated almost from the get-go. Florida led by as many as 35 points in the second half before settling on an 80-58 final scrore. The Gators will face the winner of fourth-seeded Alabama and fifth-seeded Tennessee, which is currently in progress.

Down on the bottom of the bracket, the second-seeded Kentucky Wildcats will attempt to enhance their NCAA Tournament resume when they face the 10th-seeded Vanderbilt Commodores. The Commodores scored a mild upset on Friday by defeating seventh-seeded Arkansas. Kentucky beat Vanderbilt both times in the regular season, but only by a combined six points.

In the last game of the night, the sixth-seeded Missouri Tigers will look to continue their SEC Tournament run when they face the third-seeded Ole Miss Rebels. The teams split two regular season meetings, with the home team winning each game.

Here's the rest of the schedule for the day (all times Eastern):

And here's an updated bracket via Wikipedia: 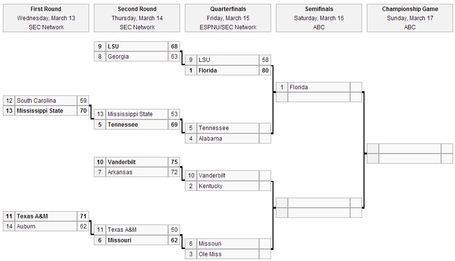