The 2013 SEC tournament heated up on Friday with the quarterfinal round. The conference still has a muddled group of bubble teams, so many of the games were critical for teams hoping to impress the Selection Committee on Sunday. Now only four teams are left standing in the quest for the automatic bid. Let's recap Friday's action.

The runaway favorites to win the tournament, Florida, had no trouble taking care of LSU. Erik Murphy had a banner day, scoring 27 points, grabbing 12 rebounds and sinking 5 of 7 three-point shots. The Gators shot 50.9 percent from the field and dominated the glass, getting 42 rebounds to the Tigers' 26.

The Tide kept their tourney hopes alive with a critical win over a fellow bubble team. Levi Randolph scored 15 points and Nick Jacobs hauled in 12 rebounds. The Vols couldn't find the bucket at all, only making 32.1 percent of their field goals. They now face an agonizing wait on Selection Sunday.

Alabama is still hanging on the bubble, but they're still alive in the tournament. A win over Florida on Saturday would go a long way towards boosting their resume.

Another one of the bubble teams, Kentucky saw its stock shot after a shellacking to the 15-16 Commodores. Kentucky couldn't find the bucket at all, shooting just 34.6 percent. Meanwhile, Vanderbilt made 50 percent of their field goals and sank 8 of 17 three pointers. Dai-Jon Parker led the way with 12 points and six rebounds.

Once considered one of the "last four teams in," John Calipari's team now has an agonizing wait on Selection Sunday.

It took a miraculous buzzer-beater, but the Rebels are still in the bubble picture. Marshall Henderson scored 27 points and Murphy Holloway grabbed 14 rebounds to pace Ole Miss. The Tigers seemed to have this one in the bag, but Ole Miss scored 13 points in the last six minutes to come storming back from a five-point deficit.

The Rebels take on Vanderbilt in the semifinals on Saturday. 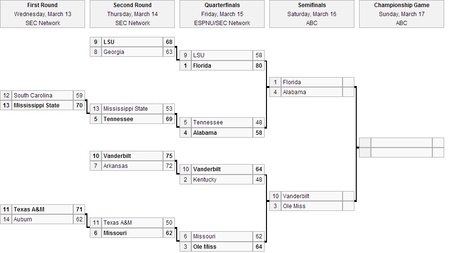