The top eight seeds in the ACC tournament were in action on Friday, and two of the higher-seeded teams fell in the quarterfinals.

The No. 7 Maryland Terrapins pulled off the biggest upset of the afternoon, defeating the No. 2 Duke Blue Devils, 83-74. Maryland shot 50 percent from the field against Duke, and sank 23 of their 25 free throw attempts. Dez Wells scored 30 points for the Terrapins, while Mason Plumlee had 19 points and seven rebounds for the Blue Devils.

The No. 1 seed Miami Hurricanes trailed at halftime, but received a strong second-half performance from Shane Larkin to win, 69-58, against the No. 8 Boston College Eagles. Larkin scored 20 points, including 15 in the second half, while Kenny Kadji scored 15 points and grabbed 12 rebounds.

The No. 5 N.C. State Wolfpack had no issues in their quarterfinal game, defeating the No. 4 Virginia Cavaliers, 75-56. Scott Wood caught fire from behind the arc, sinking seven three-point shots en route to 23 points. C.J Leslie picked up a double-double, scoring 17 points and snagging 11 rebounds.

In the final quarterfinal game, the North Carolina Tar Heels cruised past the No. 6 Florida St. Seminoles, winning, 83-62. P.J. Hairston scored 21 points on 7-of-11 shooting from the field, and Reggie Bullock added 17 points and nine rebounds. 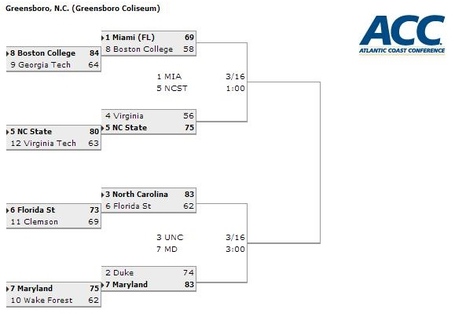