There are many methods to filling out an NCAA bracket, but Alfie Crow's preferred method is deciding how the mascots would do fighting against one another.

Share All sharing options for: 2013 NCAA bracket picks: Predictions based on mascot fights

I'll be honest and say I don't know much about bracketology, but we have great bracketologists right here at SB Nation! I'm going to try my hand at looking like a genius by predicting the 2013 NCAA Tournament for you, but I'm using a new revolutionary method that no one has ever tried before.

For each matchup I'm going to look at, I'm going to decide the winner based on which mascot would win in a fight.

Winner: Liberty Eagles - NCA&T's mascot is a bulldog, which are slow and fat. Eagles can fly and have big-ass talons, so they would just constantly swoop down and slash at the bulldog until victory is had.

Winner: Saint Mary's - Middle Tenn's mascot is a horse and Saint Mary's mascot is the "Gaels", which is essentially a person who speaks Gaelic. Horses can be dangerous, but they can also be tamed with a simple apple. Gaels win.

Winner: JMU - LIU Brooklyn is the Blackbirds, which presents us with another bird vs. bulldog matchup, but a blackbird can't do near the damage an eagle can, so I'm guessing the bird would just give up. Bulldogs win.

Winner: La Salle - Boise State is a bronco, giving us another human vs. horse matchup. I would tend to think an "Explorer" would have excellent horse taming skills, therefore I think the Explorers win, tame the horse, and explore the next round.

Winner: Liberty - Yeah sure, you'll scoff at a 16 seed knocking out a No. 1 seed, but the Eagle is the apex bird predator. As much as I love cardinals, they just stand no chance at all against the majestic eagle.

Winner: Missouri - Cam the Ram is adorable, but a tiger is vicious beast that will eat a ram for lunch. There might be a struggle if Cam can get a jump on the tiger and ram him, but ultimately the tiger will triumph.

Winner: Oklahoma State - There have been tales of cowboys shooting ducks, enshrined in video games from our youth called "Duck Hunt." It's as simple as the cowboys shooting the duck with their guns. Are ducks even violent? Could they kill a man?

Winner: New Mexico State - The Aggies' mascot is Pistol Pete, who obviously has a pistol to shoot the Billiken with, which is a weird looking good luck elf charm. Pete will undoubtedly ask if he feels lucky.

Winner: Memphis - The unfortunate demise of the Gaels comes when they confront a tiger and try to speak to it in Gaelic.

Winner: Michigan State - While this will be a battle of epic proportions, with a crusader against a Spartan warrior... there were many crusades and not a lot of them were successful. The Spartans proved they can defy the odds. I mean, you saw "300," right?

Winner: Cincinnati - Not many people know this, but the bearcat is actually a binturong, which is a viverrid from Asia. It's an odd looking creature but it let's off a musk that smells like buttered popcorn. It can also dislocate all of its joints while climbing trees which is weird as hell. You think a bluejay stands a chance against that?

Winner: Duke - Great danes are ADORABLE, even when they're fully grown. But even their adorable awkwardness can't stand a chance against the devil, albeit a blue one.

Winner: Missouri - While the eagle is a majestic predator from the sky, I think a tiger can take one down. All it takes is a stalled dive from the eagle trying to make the way into the jungle for the tiger to swat and bite.

Winner: Oklahoma State - This will be just like the infamous shootout in the O.K. Corral, but the cowboys will come out the winners.

Winner: Michigan State - While tigers are vicious creatures, Spartans are vicious warriors who have undoubtedly fought against armies utilizing predators in the midst.

Winner: Cincinnati - Not even the devil can resist the urge of buttered popcorn.

Winner: Southern - Yes, another No. 1 seed goes down to an apex predator. A Jaguar most definitely could defeat a Bulldog. It wouldn't even be close.

Winner: Wichita State - While a panther is a challenging animal, I have no doubt if you were to shock one it would be incapacitated.

Winner: Wisconsin - Rebels can be tricky, but there aren't many badgers in the south and badgers don't play around.

Winner: Kansas State - A wildcat could catch an unsuspecting explorer snooping around in the woods where he shouldn't be.

Winner: Belmont - Wildcats can be tricky, but I have no doubt they don't stand a chance against a bear. Bears are godless killing machines.

Winner: New Mexico - Harvard's mascot is the Crimson, which is some weird looking pilgrim dude. I think a wolf can take care of that.

Winner: Iowa State - It's tough to take down the Irish in a fight, but I'm not sure they can beat up a cyclone.

Winner: Ohio State - Iona is another Gael, which means they will die if they eat the buckeye because it's poisonous.

Winner: Wichita State - Once again, Jaguars can be a violent predator, but they're not of much use if they're shocked into submission.

Winner: Wisconsin - While wildcats have teeth and claws, but so do badgers. Badgers are tough as hell, too.

Winner: Belmont - While a pack of wolves can likely take down a bear, New Mexico's mascot is Lobo. A single wolf. No chance, that's what he's got.

Winner: Kansas - A Jayhawk can just land on the top of the hill that the Hilltoppers are on. That makes no sense, but I don't know what the hell that big red thing is.

Winner: Villanova - Another ram in the tournament bites the dust to a predator. Maybe rams should get some teeth.

Winner: VCU - Finally, a ram is victorious. Kangaroos are tricky, but I bet if you rammed that sucker right in the pouch it wouldn't even know what to do.

Winner: Michigan - The jackrabbits don't stand a chance against a wolverine, one of the most vicious animals known to man.

Winner: UCLA - A gopher might be able to build a tunnel, but all that's going to do is attract more bears. To eat them.

Winner: Northwestern State - While an alligator is an upper-level predator, can it beat a demon? Nope.

Winner: San Diego State - "You have died of dysentery." Pretty much the same thing as Montezuma's revenge.

Winner: Florida Gulf Coast - It's another matchup between a bulldog and an eagle, and I can't see the match working out any differently.

Winner: Michigan - While a ram got a victory in the first round, it's not going to have the same luck against a wolverine. Wolverines are just too wily.

Winner: Northwestern State - While bears are godless killing machines, I don't think they can defeat a demon.

Winner: San Diego State - Not even an eagle can take down an Aztec warrior.

Winner: JMU - Hoosiers would probably be afraid of a bulldog.

Winner: N.C. State - A pack of wolves against an owl. C'mon.

Winner: California - Rebels can only run so far from godless killing machines.

Winner: Marquette - This time the eagle prevails against the wildcat, because it's made of gold.

Winner: Miami - I don't even know what Pacific's mascot is, but it's not beating a damn hurricane.

Winner: N.C. State - Once again, you're dealing with a PACK OF WOLVES.

Winner: California - This would be a fun battle to watch. Two killing machines going at one another, and while Montana is a grizzly bear, the Cal bear is golden. Can't top that.

Winner: Miami - I'm pretty sure a hurricane could defeat a tribe of American Indians.

Winner: Missouri - A cowboy has never seen a tiger before and they don't exist in the wild wild west, so if he's seeing one it's likely in the jungle where the tiger will get the pounce on him.

Winner: Michigan State - Spartans don't know what buttered popcorn smells like, so they will not be distracted by the musk of the binturong.

Winner: Wisconsin - The Shockers have been shocking animals through the tournament, but badgers are resilient creatures and a simple shock won't take them down.

Winner: Belmont - I think a bear can withstand a cyclone. That's it.

Winner: Michigan - Wildcats are feisty but wolverines are wolverines and I don't think a wildcat could hang.

Winner: N.C. State - As we know, bears are godless killing machines but even that can't withstand an attack by a pack of wolves.

Winner: Miami - I'm not sure bison have ever been in a hurricane, so they would have no idea what to do.

Winner: Michigan State - The Spartans have already proven they can take down a big cat, so another tiger won't be an issue for them.

Winner: Wisconsin - While most people would think a bear would easily take down a badger in a fight, badgers are wily. They can also climb trees and jump on the backs of bears. Advantage: badger.

Winner: San Diego State - Montezuma is a tough out, as his revenge would likely take down the mighty wolverine.

Winner: Miami - The pack of wolves have devoured everything laid in their path up to this point, but a mighty hurricane will wipe them out.

Winner: Michigan State - The mighty Spartans have taken down a string of wild animals through the tournament and are battle-hardened, so a badger shouldn't be much of a challenge at this point.

Winner: Miami - The Spartans have fought hard the whole way through the tournament, much like they did at the Battle of Thermopylae, but even then they still lost, like they would if they ran into a hurricane. 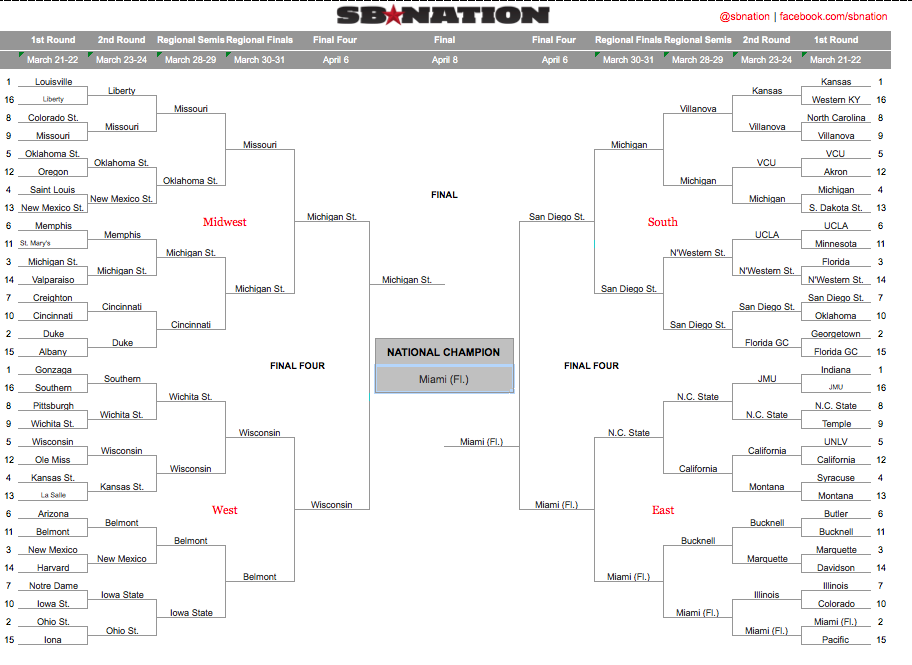