Oklahoma State's Marcus Smart headlines the list of NBA Draft prospects in the Midwest region of the 2013 NCAA Tournament, but will he stick around long enough for scouts to see him?

There's plenty of NBA talent in the Midwest Region, but the Hall of Fame coaches are the real story. Rick Pitino, Mike Krzyzewski and Tom Izzo are three of the most decorated coaches in the business. Perhaps not coincidentally, they have the top three seeds in the region and all are major threats to cut down the nets in Atlanta.

Great coaches are incredibly important in March, but not just for their tactical ability. A college basketball season, as Miami Heat coach Erik Spoelstra would probably say, is "a process." March is the final result, but the process is something that takes place all season. College teams turn over every year, so coaches have to develop a feel for the strengths and weaknesses of their particular roster. Even more importantly, their players have to operate within a team concept in order to consistently execute in the half-court on both sides of the ball. 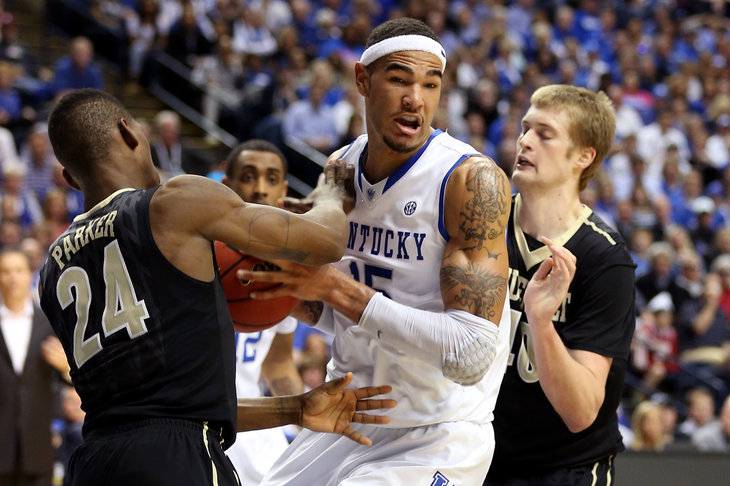 That's really what separates college coaches. Some can coach the process a lot better than others. That's why guys like Izzo can consistently steer teams with less talent deep into the Tourney. This isn't an AAU tournament. If your team can't play sound help and recover defense for 30+ seconds and score points within the flow of an offensive system, it's going to be hard to consistently win, regardless of how much talent you have. From top to bottom, Oklahoma State and Memphis are as talented as Louisville, Duke and Michigan State. We'll see if Josh Pastner and Travis Ford have put in the work all season for that to matter over the next few weeks.

Here's our list of the 10 best NBA prospects in the Midwest region.

Smart is an athletic 6'4 225 point guard who can do everything on the floor. However, even though he's surrounded by as much talent as anyone in the country, I'm not all that confident about Oklahoma State's chances in March. A well-coached team generally executes well in the half-court, something the Cowboys don't do. They're more like the 2010 Heat than the 2012 version. Kansas State, a veteran team who plays defense and doesn't turn the ball over, beat them pretty easily in the Big 12 conference tournament.

If Oklahoma State is knocked out relatively early, don't blame Smart. After all, in his only season in college, Kevin Durant lost in the second round to a USC team headlined by Nick Young.

An extremely athletic 6'10 240 junior big man, Payne has come into his own this season. He has the size and athleticism to be a defensive force as a small-ball 5 at the next level, but his offensive game is what makes him such an intriguing pro prospect. He has hit 15-33 from beyond the three-point arc this season and his stroke looks pretty good. After spending a lot of time spotting up off Derrick Nix this season, Payne is fairly comfortable playing on the perimeter.

With the NBA becoming more and more perimeter-oriented, athletic big men like Payne who can defend on the interior and step out on offense are invaluable. Can you imagine what a team like Houston or Miami could do with a legit stretch 5?

Dieng doesn't get much of the publicity at Louisville, but he's their most important player and their best pro prospect. An athletic 6'11 245 big man with a 7'6 wingspan, Dieng has ideal size for an NBA center. He's both quick and strong, a valuable combination at his size. And while he'll never be elite offensively, he has a surprisingly good feel for the game. Dieng can operate out of the high post, either hitting cutters or knocking down the mid-range jumper. He's shooting only 50 percent from the floor as a senior, so the question is whether he'll be efficient enough offensively at the next level to be a starter. Even still, a high-level backup center on a rookie contract has a lot of value in the league's new economic climate.

The middle brother of Duke's "fighting Plumlees," Mason has come into his own as a senior. A super-athletic 6'10 235 center, he's thrived as the lone big man in the Blue Devils four-out system. He has the size and athleticism to control the paint defensively at the collegiate level. On the other end of the floor, his relative lack of polish is less of an issue with Ryan Kelly (aka The White Raven) dragging the other big man out to the three-point line.

His length and quickness will make him an effective player setting and defending ball screens at the next level, where he should have a long career as a third big man coming off a bench.

Thomas, a 6'7 240 sophomore forward built like a tank, is aptly named. What's even more impressive is how fluid of an athlete he is. He's so light on his feet that Memphis uses him at all five positions defensively. He has the versatility of a young Ron Artest, so the question becomes how do you use him on the offensive side of the floor? The good news is that he has a decent-looking jumper and a good feel for the game, although his percentages have declined dramatically with a bigger role in the offense this season. If he can put it all together as a junior, he has a chance to be a very high first-round pick.

Nash is the measuring stick for Oklahoma State. When he's scoring efficiently and dictating match-ups on the perimeter, they are almost impossible to beat. There are very few collegiate players who can match-up with Nash, an athletic 6'7 230 forward with a quick first step. The problem is, rather than aggressively attacking the rim in order to set up his jumper, he will settle for jumpers and disappear for long stretches. He doesn't have a very good feel for the game, but he has improved after a very tough freshman season. Nash has the talent to be a first-round pick, but he's not ready to play at the next level yet.

Brown wasn't a McDonald's All-American, so he didn't come to Oklahoma State with as much publicity as Nash or Smart. However, the 6'3 190 junior guard has been nearly as productive as those two. Undersized combo guards aren't particularly valuable come draft time, but Brown has a very particular set of skills that make him an ideal fit for a very specific role. He's not on Avery Bradley's level as an individual defender, but he has a similar physical profile -- quick feet, long arms, absurd hops -- and is much more skilled offensively. An excellent shooter who can double as a secondary ball-handler while playing high-level defense on PGs, Brown would thrive in a role similar to the one Mario Chalmers has in Miami.

Pressey follows Smart and Nash (who went to Chris Bosh's high school) as the third player from Dallas on this list, but he's the first from the Southwest Preparatory Conference. He was four years behind me at a rival high school, so I've been hearing about him for quite awhile. He's the son of Paul Pressey, the original point forward and a longtime NBA assistant coach, so you know he knows how to play the game. At 5'11 175, Pressey has Ty Lawson-like quickness and passing ability and he's nearly impossible to defend in the open court. However, unlike Lawson, he's a very inconsistent jump shooter (38 percent from the field, 32 percent from three-point range, 75 percent from the free-throw line this season), something that has to improve before he goes to the next level.

McDermott's Wooden Award candidacy fizzled as the season went on, but he can really play. A 6'8 225 junior combo forward, McDermott is the prototypical coach's son who happens to actually play for his father at Creighton. He doesn't have much athleticism, but he compensates by playing like a 10+ year NBA veteran. He has a great understanding of the angles and geometry of the court, especially as a back-to-the-basket scorer. Just as importantly, he almost never misses open shots. The result is a rare combination of volume and efficiency: he averages 23 points on 56/50/86 percent shooting this season.

However, at the next level, all the questions come on the other side of the floor. McDermott may need to be protected by an elite defensive center to be a consistent member of an NBA rotation.

A pep talk from Russ Smith 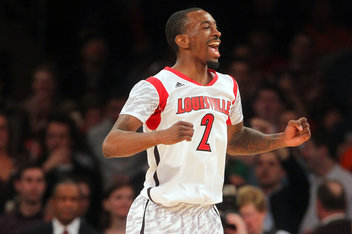 Get ready for the NCAA Tournament, Louisville fans.

A 6'0 160-pound junior combo guard with incredible athleticism and (not so) incredible decision-making, Smith is one of the most unique players in the country. Realistically, a guy with his size who doesn't have a great outside shot and can't run point probably won't last in the NBA, but his game-changing defensive ability will get his foot in the door. Smith has incredibly quick feet and strong hands. His ability to ballhawk for 94 feet is one of the keys to Louisville's system. He's the ultimate bad process/good results player who has more than earned the "Russdiculous" nickname given to him by Pitino. He'll make his impact on the Tournament, one way or the other, before it's all said and done.

At 7'5 and 355 pounds, the Canadian freshman is one of the biggest human beings to ever play high-level basketball. And while most guys his size are shot-blocking curiosities, Bhullar is a legitimate basketball player. If anything, his size is actually a hindrance. If he were a "normal-sized" 7'1 300-pound center, he probably wouldn't be playing in the WAC.

Bhullar has a nice little jump-hook, which is really all you need at his size, and he's a formidable presence defensively in a half-court game. He doesn't really have the ability to run up and down a basketball court for any length of time, but if he can drop some weight, get in better shape and stay healthy, he'll make New Mexico State a very interesting team over the next few years. Right now, his scouting report is "???", but there's a chance it becomes "!!!".