The South region is deep with NBA prospects, but which ones shine above the rest? Ben McLemore and Otto Porter headline our list.

The prospects are thick on the ground in the South region, where the top 13 seeds all have at least one guy being evaluated by NBA scouts. The South is the one region where you could legitimately make a top 20 list without scraping too far down the barrel. As a result, it's where the most fascinating individual match-ups of the round of 64 will go down.

With point guard play so important in March, the headliner is Nate Wolters vs. Trey Burke in the 4 vs. 13 game between Michigan and South Dakota State. You couldn't come up with a better challenge for both. Will Wolters be able to handle Burke's speed? Will Burke be able to handle Wolters' size? Which one will win the turnover battle and control the tempo of the game? The answers to those questions will go a long way toward deciding the winner.

The other intriguing match-up comes in the 6 vs. 11 game between UCLA and Minnesota, which became a popular upset pick after UCLA's Jordan Adams went down for the season. Shabazz Muhammad has been a bucket-getting machine all year, so Gophers' senior small forward Rodney Williams will get the chance to make a name for himself defensively. Williams, a 6'7, 200-pound jumping jack, is a jaw-dropping athlete. His offensive game hasn't improved much in his time at Minnesota, so he'll need to prove that he can be a defensive stopper if he wants to stick in the NBA. 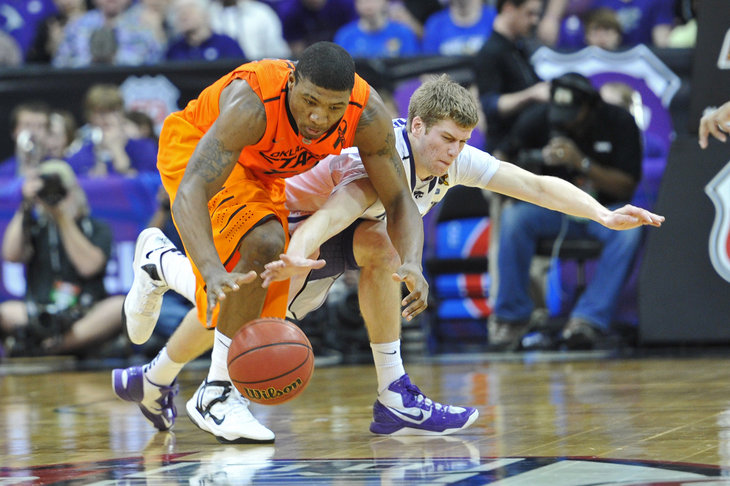 In general, you want to be very careful about what conclusions you draw from such a limited sample size as one 40-minute game. However, it's always interesting to see how a prospect matches up with another NBA-caliber player at his position. For the less-heralded player, an encounter is a chance to improve his rep. For the more-heralded one, it can be a revealing glimpse into how he'll transition to the NBA.

Here are our rankings of the top 10 prospects in the South region.

A super-athletic 6'5, 185-pound freshman guard, McLemore is the rare All-Star caliber player who doesn't need to dominate the basketball. He gets a lot of his offense by running off screens, moving without the ball and getting out in transition. He's a Bizarro J.R. Smith: an elite three-point shooter and above-the-rim player who scores within the flow of the offense and rarely forces the action.

However, since he rarely creates his own shot, he can disappear for large stretches of the game, especially when Kansas is getting inconsistent play from its point guards, a fairly regular occurrence. If you expect to see him scoring on clear-outs to end the game and will his team to victory, you will be disappointed.

Porter is more well-rounded and less athletic than McLemore, but he's similar in that he doesn't always hunt for his own shot, even though he's easily his team's most dynamic scorer. An incredibly skilled 6'8, 205-pound sophomore small forward, Porter can do just about everything on the court: score, shoot, pass, rebound and defend. His Wooden Award candidacy began to gather steam after a 33-point outing against Syracuse, but he isn't normally that explosive, particularly in Georgetown's deliberate half-court offense.

He's not going to be a dominant offensive player at the next level, but he'll be one of the safest picks in the lottery. Draft him and you can plug him in as your starting small forward for the next decade.

The engine that powers Michigan's offense, Burke is the rare 6'0, 175-pound player who can take over a game. As a pure point who can score from any point in the floor, he doesn't have any real holes in his game, which is vital for a player his size to succeed at the next level. When he's using his playmaking ability to set up his scoring, the Wolverines can be unstoppable, but when their offense stagnates, he has the tendency to settle for contested pull-up jumpers. Burke is a starting-caliber NBA point guard, but his size means he'll never be great defensively, so his ceiling will depend on his ability to play efficiently.

Say this much for Shabazz: unlike McLemore or Porter, you never need to worry about whether he's getting his shots. Shabazz is a professional scorer who averages 18 points a game on 45 percent shooting as a freshman, but there are red flags if he's going to be a top-five pick. He fits the profile of collegiate stars who struggle at the next level: one-dimensional scorers who are undersized and unathletic for their position. He's a below-the-rim 6'6, 225-pound small forward who likes to play with his back to the basket and score in the paint.

He'll be a good scorer at the next level, but I doubt he'll be a great one. And since he doesn't excel at anything else, I can't see him becoming an All-Star caliber player. 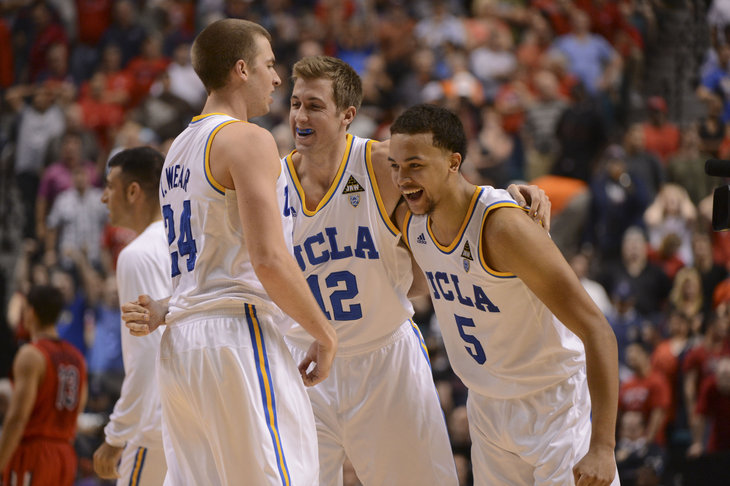 Anderson might be the most unconventional player in the country. Imagine Rajon Rondo's game in the body of an un-athletic 6'9, 235-pound forward. He's a nightly double-double threat capable of making and seeing passes at the level of an NBA point guard. However, his lack of athleticism or a jumper is already an issue for him in college. He needs one or the other, and since he isn't getting any faster, he had better live at the gym this summer. With a jumper, he could be an All-Star. Without one, he could top out as a 6'9 Evan Turner.

No matter what happens, Anderson's career will be fascinating to watch.

Along with Tim Hardaway Jr., Robinson is one half of the Wolverines' wing duo guaranteed to make you feel old. His ability to play as a small-ball power forward at 6'6, 210 pounds has been a mismatch nightmare for teams all season. He projects as more of a shooting guard at the next level, but his versatility will allow him to play next to a lot of different players. Burke and Hardaway Jr. command the brunt of the defensive attention, so the real question is how the Big Dog's son performs as a main option. If Michigan makes a deep run, he might be better off striking while the iron is hot and declaring for the draft after only one season.

Bullock, a long and athletic 6'7, 205-pound junior shooting guard, wasn't able to take the next step this season. With four guys off to the NBA, there was a void for Bullock to step into on and off the court that he hasn't been able to fill. Nevertheless, his size, athleticism and shooting ability should make him an excellent "3-and-D" wing at the next level.

He may end up being a better pro than he is a collegiate player. On the right team, Bullock could become a longer and more athletic version of Danny Green, a former Tar Heel who bounced around the NBA before locking down a starting spot on the Spurs.

The author of one of the dunks of the year, Franklin has the ability to take over a game on the collegiate level. An athletic 6'5, 205-pound shooting guard who plays much bigger than his size, he literally does it all for San Diego State. He leads the team in points, rebounds, assists and steals this season.

The main concern with Franklin is his jumper, as he has percentages of 40 from the field/26 from three-point range/77 from the free-throw line this season. However, a good portion of those low numbers stem from the fact that he has to take a lot of difficult shots to bail out the Aztecs at the end of a possession. What that means for the Tourney is that if Franklin gets hot, San Diego State can beat anyone, but if he's off, it can lose to anyone, too.

Oklahoma is coming into the Tourney with absolutely no national profile, but Lon Kruger has put together an excellent team in his second season in Norman. It starts upfront with M'Baye and Romero Osby, two athletic big men who can defend and stretch the floor on offense. Osby is the better collegiate player, but M'Baye has the potential to be a better pro, as he's taller, more explosive and has deeper range on his jumper. The Sooners' relative anonymity has hurt his draft stock, but as a 23-year-old redshirt junior, he might need to go ahead and declare anyway.

After spending his freshman season caddying for Tyler Zeller and John Henson, McAdoo was expected to emerge as an All-American this year. Instead, the extended playing time revealed some potentially fatal holes in his game that have to be addressed. A long and athletic 6'9, 230-pound power forward, he has ideal size for an NBA 4. There's just one problem: he can't shoot the ball. If you can't shoot or create your own shot, you can't really play at the 4 in the modern NBA. Then, the problem becomes that he's too small and not a good enough interior defender to play the 5.

If he can develop a consistent 15-20 foot jumper, he'll have a long and productive NBA career. If he can't, he'll be a journeyman.

The fact that Wolters is here and not on the Top 10 list says more about the depth of talent in this region than his game. He might play in the Summit League, but he can play. At 6'4 and 190 pounds, he's got excellent size for the point guard position, a great feel for the game and an excellent outside shot. The question is whether he has the quickness to beat NBA-caliber athletes off the dribble and be at least passable defensively.

That's why the match-up with Michigan is so intriguing. After seeing him in 40 minutes against Burke and Hardaway Jr., we should know a lot more about Wolters. If the Jackrabbits can sneak into the Sweet 16, I could see Wolters being on the cover of Sports Illustrated.