The Louisville Cardinals and Michigan Wolverines advanced to the third round of the 2013 NCAA Tournament on Thursday, each pulling out double-digit wins.

For more on this story, head over to Card Chronicles and Maize n Brew.

Louisville went up big on the North Carolina A&T Aggies and cruised to a 79-48 victory. Michigan was locked in a battle with the South Dakota St. Jackrabbits early, but cruised in the second half despite struggles from guard Trey Burke.

The Cardinals will now face the winner of Colorado State-Missouri in the third round, while Michigan will get either VCU or Akron. Both of those games will be played on Saturday, with game times to be announced later.

For Michigan, Tim Hardaway Jr. and Glenn Robinson III each scored 21 points and combined to shot 8-10 from three-point range to lead the Wolverines to the 71-56 victory. Russ Smith had 23 points on 10-16 shooting for Louisville.

For more results from the first full day of the NCAA Tournament, take a look at the updated tournament bracket: 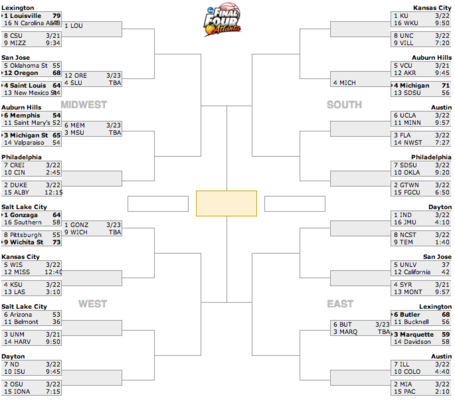