NCAA bracket update: Arizona, Cal move on to the third round

The Pac-12 remains undefeated in the tournament so far, as Arizona and Cal joined Oregon in the third round.

Share All sharing options for: NCAA bracket update: Arizona, Cal move on to the third round

Another set of games, another Pac-12 upset. After the No. 12 Oregon Ducks ran the No. 5 Oklahoma State Cowboys out of the building, the No. 12 California Golden Bears held off a late rally to dispatch the No. 5 UNLV Runnin' Rebels, 64-61. Cal held a double-digit lead in the second half, but UNLV came to life at the end of the game. They never were able to get the lead, however, and the Mountain West Conference is now 0-2 in the tournament. Cal will go on to play the winner of the Syracuse-Montana game on Saturday.

The No. 6 Arizona Wildcats had much less trouble taking care of their opponent, beating up the No. 11 Belmont Bruins, 84-61. Mark Lyons led with 23 points and and the team shot 9 of 17 threes to put this game away quickly. Arizona now awaits either New Mexico or Harvard.

Here's the updated bracket, courtesy of ESPN (click to enlarge): 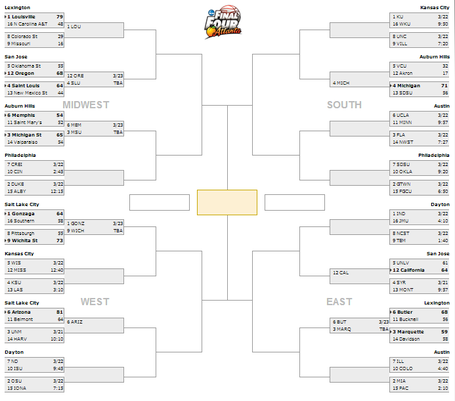