Marquette blog Anonymous Eagle couldn't get over the ridiculous nature of their team's 59-58 win as the team nailed three threes, then forced a turnover and converted a game-winner in the game's final ten seconds.

Whether the insane comeback at the end of the Marquette-Davidson game ruined your hot upset pick or saved your bracket from destruction, you're going to want to read Marquette blog Anonymous Eagle's recap of the game.

For starters, let's take a peek at the site's cover the morning after the team came back from down five points with 30 seconds left: 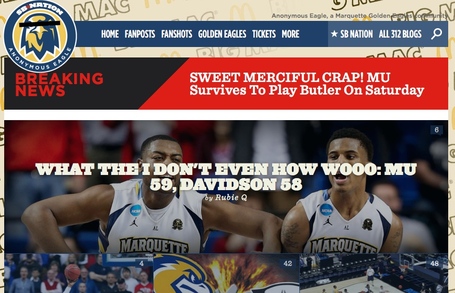 In case you missed it, the No. 3-seeded Eagles played into everything that's been said against them all year long: that they didn't have a go-to scorer, that they couldn't win away from home, and that they couldn't shoot from three, connecting on just one of their first 12 attempts from downtown. Meanwhile, Jake Cohen had 20 points, and the No. 14-seed Wildcats seemed on the verge of knocking off the Golden Eagles.

Then, everything went nuts. Marquette drilled three low-percentage threes in the game's final 1:02. Up one with ten seconds left, De'Mon Brooks' pass that could have sealed the game floated just out of the reach of his intended target, giving Marquette the ball with seven seconds to go.

Vander Blue drove to the hoop and scored off a screen with one second to go -- the GIF is also at Anonymous Eagle -- and Marquette held on for the 58-57 win. That led to this:

Suddenly, you're pouring a bourbon and, mouth open, you're watching a gif on a loop, and you're trying to make sense of whatever the hell it was that you just witnessed, only you're reduced to mumbling the same word over and over, with steadily increasing incredulity:

And I've got nothing. I'm not sure if I ever will. But my bourbon and I are going to enjoy the **** out of this, because I don't think I'm ever going to see something like it again.

Vander Blue Grown Ass Man of the Millenium: Nine points in the first 38:30 of the game. Seven points, including the last two on his latest submission to the Pantheon of Great Plays in Marquette History, and a pair of stones that you have to buy a separate seat for on an airplane. Don't you go changing, Vander Blue. I'll tumble for you.

They chronicle the shift from anger and disappointment to stupefaction pretty phenomenally, so it's worth a look. There was definite heartbreak on the floor Thursday, so it's nice to see the reverse side of that in a completely jubilant fanbase.