Get your updated, printable brackets here.

A wild day of action on Saturday determined half of this year's Sweet 16 teams. On Sunday, eight other schools will punch their ticket for the second weekend of the NCAA Tournament.

In the early session, every game on Saturday was decided by at least 15 points. Highly-seeded teams like Louisville, Michigan and Michigan State all cruised to victories. Arizona and Oregon both represented the Pac-12 conference well with big wins over Harvard and St. Louis, respectively.

The night session was much weirder. Oregon blew out St. Louis, a darkhorse candidate for the Final Four. Marquette barely edged Butler, 74-72, in what was arguably the best game of the Big Dance to this point. And in the nightcap, No. 9 seed Wichita State shocked top-seeded Gonzaga, and Syracuse narrowly edged California.

There are eight games scheduled for Sunday that will run from noon to midnight. Here is an updated look at the bracket to get you caught up. 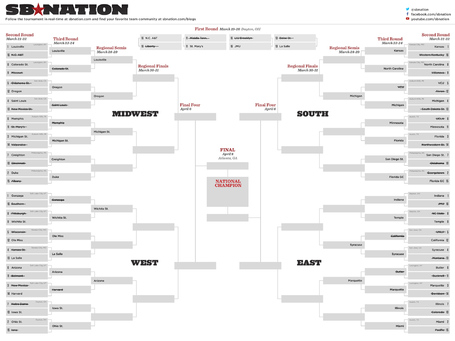