After playing eight games on Tuesday night, just 16 teams remain in the hunt for the championship.

The Sweet 16 for the 2013 Women's NCAA Tournament was finalized on Tuesday following a busy night of action. Here is a recap of all eight games.

No. 6 Delaware defeats No. 3 North Carolina, 78-69: In what was arguably the biggest upset of the day, Delaware knocked off UNC behind Delle Donne's 33 points.

No. 2 Duke defeats No. 7 Oklahoma St., 68-59: Duke trailed by 13 points at halftime, but a great defensive performance in the second half clawed the Devils back into it as they picked up a gritty win.

No. 5 Louisville defeats No. 4 Purdue, 76-63: Sara Hammond recorded a double-double with 21 points and 10 rebounds as the Cardinals moved on to the Sweet 16.

No. 2 Kentucky defeats No. 7 Dayton, 84-70: The Wildcats put together one of their best offensive performances of the season, led by A'dia Mathies' 34 points.

No. 1 Baylor defeats No. 8 Florida St., 85-47: Brittney Griner was amazing once again for Baylor, scoring 33 points and bringing down 22 rebounds as the Bears rolled.

No. 1 Notre Dame defeats No. 9 Iowa, 74-57: The Irish made quick work of the Hawkeyes on Tuesday, holding them to just 23 points in the second half.

No. 1 Stanford defeats No. 8 Michigan, 73-40: This one was over by halftime, with the Cardinal up by 25 at the break. Stanford continued to look the part of a national champion with their convincing win.

Here is an updated look at the bracket. 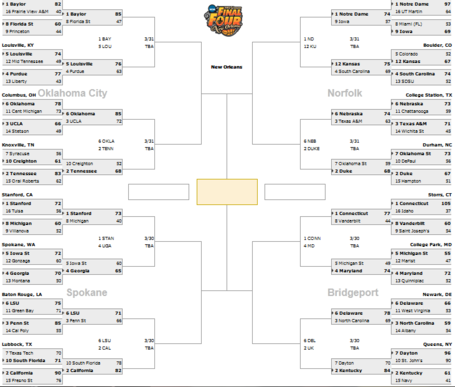 • Get to know Florida Gulf Coast, best school ever

• The best and worst of Sunday's Madness