Two team bloggers exchanged e-mails this to talk about Ryan Kelly's slump, the rivalry between Izzo and Coach K and the keys to Friday night's game.

Chris Vannini is a Michigan State alum who now manages The Only Colors, SBN's Spartans blog. Bart Matthews is a Duke grad who co-founded Blue vs. Blue, an SBN blog that covers both sides of the Tobacco Road rivalry.

Vannini: While football season at Michigan State was a disappointment, it's nice to see the basketball program hasn't lost a step. There's a lot of nervousness over this titanic Sweet 16 matchup, but, for the first time perhaps ever, MSU fans are feeling somewhat confident about this one, as the Blue Devils don't have a decided talent advantage over MSU, like they usually do.

Matthews: In an odd twist of fate, OUR football season was a rousing success (relatively speaking). I would say that there's more excitement than nervousness on our end. The nervousness passed with the wins over two teams we SHOULD have beaten (an emotional hangover we can thank Lehigh for) and now it's down to business against the other big boys. The general feeling is that, based on style of play, MSU is not the type of team that gives Duke fits, so we are reasonably optimistic about our chances in this one, though you are absolutely right in noting that the talent gap is not there as it might have been in years past.

Vannini: So what's up with Ryan Kelly? He went off in his first game against Miami, but has trailed off since. Are you worried about his play? He'll be going up against Adreian Payne, an athletic 6'10 forward who, like Kelly, can hit the three-pointer. What do you think about that match-up?

Matthews: Yup. He's been colder than a well digger's ass. That's not good, obviously, but his presence in the lineup is huge even when he's not producing points. On offense, he draws the other team's 4 away from the basket with the threat of his three point-shooting and that is critical for Duke's spacing. On defense, he's a primary organizer, a better than average shot-blocker, and is almost never out of position. 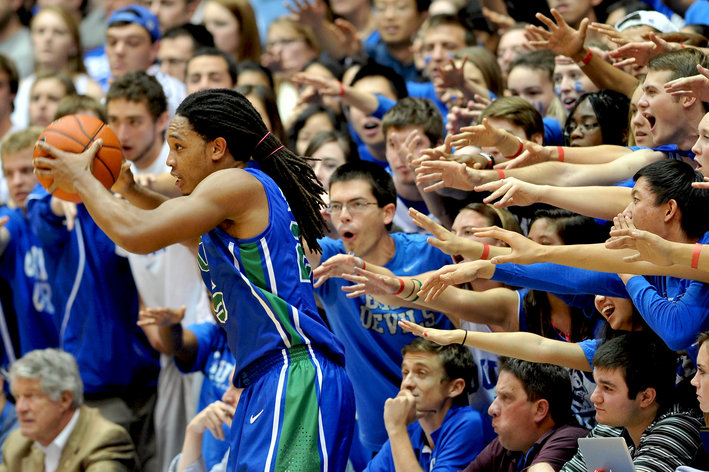 A look back at the Blue Devils regular season win over Cinderella.

Now, Payne is a far superior athlete, but Kelly is crafty. I can easily envision scenarios in which those qualities result in foul trouble for the other player. Payne can play outside, but Kelly lives there. Can Payne still be an effective shot-blocker and rebounder? I think it's very likely that they neutralize each other, frankly, and that the game may be decided elsewhere. I think low post foul trouble could play a big part in this game for one or both teams. How do you feel about your ability to defend the three-point line against our bevy of shooters?

Vannini: It's hard to say. MSU was pretty good at defending the three-point shot this season (No. 17), better than defending 2's, actually. MSU likes to switch a lot when the ball is being moved around the perimeter, and the biggest problems with threes come when a guard drives into the lane, forces help defense and then finds an open player on the perimeter. Generally, though. I'd say MSU has defended it well. Still, three-point defense can be a bit of a crapshoot, as KenPom has illustrated.

I imagine the Blue Devils are going to take a lot and there will be a lot of praying that they just don't fall. If Duke has one of those games where they his 7-10 threes, it might be too much for MSU. Inside, the Spartans haven't been a typical Izzo team when it comes to rebounding, but they've done really well in the past 10 games. Duke is below average in terms of offensive and defensive rebounding. Is there a worry about the battle on the glass?

Matthews: Duke has gotten beaten up on the boards pretty much all year (and seems to most years), so winning in spite of that is something that we're pretty accustomed to. That being said, the best rebounding team we faced this year beat us twice (Maryland, who is just slightly better than MSU) and any team that relies on one player for over 30 percent of it's rebounding (Mason Plumlee) is clearly vulnerable. For us, it isn't so much winning the rebounding battle per se (since we often shoot a much higher percentage than our opponents, that can be misleading) but staying competitive vis-a-vis the offensive glass.

We have to limit MSU on that front with good rebounding performances from our guards who are capable when they put their minds to it, and/or grab our own (something none of our guys do well, with the exception of Amile Jefferson, who Coach K is mysteriously unwilling to take of the bench). I think MSU will win the battle of the boards by at least 8. And if more than 10 of those are offensive, I don't like Duke's chances. What's the status of Appling? Is he enough of a Lorenzo Brown/Shane Larkin type slashing scorer to give Duke trouble? And will his shoulder impact his performance?

Vannini: It's hard to say right now. He was wearing a shoulder brace in practice, but is hoping he won't need it for the game. Leading into the tournament, people were saying they would go as far as Appling could take them. Well, he scored two points against Memphis and MSU won by 22. Now, Duke is obviously much better than Memphis, and I don't think MSU can win with a similar performance from him.

Appling has struggled from deep in the second half of the season, so the hope is he can get into the lane or pull up for a mid-range jumper. If he can, I don't think the shoulder will have as much of an effect. However, the good thing about this team is they haven't relied on any one player. Appling is the leading scorer but averages just 13.3 points per game. Defenses can't key on any one guy, so if Appling is struggling, the Spartans have other options.

Matthews: One of the things that Duke has always done better than just about anyone is impose it's collective will (read: style of play) on the other team. If any other team or coach can lay claim to that, it's MSU and Izzo. These games are battles of will. You guys play tough, physical Big 10 defense and rebound the bejeesus out of the ball. That's who you are. We (usually) play great ball pressure man-to-man and shoot the bejeesus out of the ball. Can you guys stop us from doing our thing better than we can stop you from doing yours? Or, said another way, who can be more competitive in the arena that the other team regards as a strength? Who would you say is your key player for this game?

Vannini: As far as imposing a will, MSU is going to have to go inside. I worry about Derrick Nix's matchup with Plumlee. Nix has great strength (270 pounds), but is a bit short, and has short arms. He doesn't handle length well. He's going to have to rely on pushing Plumlee back. On the other end, I noticed Creighton did a good job of preventing Plumlee from making post moves because his matchup was much stronger that him. Both teams have great shot-blockers. So scoring inside might be a problem for both.

Is this year different for Izzo? 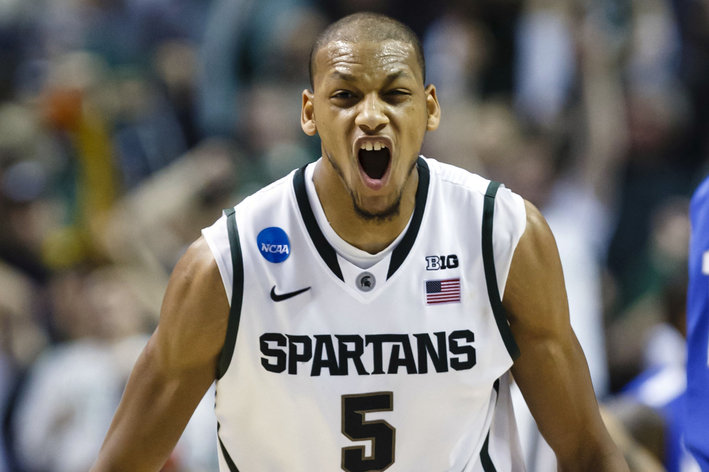 The Spartans coach has been wildly successful in March, except against Coach K.

The issue for MSU is that they're much more consistent scoring inside than outside. There's a better chance Duke does better with outside shooting. Now, Gary Harris and Branden Dawson have length on the wing, so maybe that will play a factor in the Spartans perimeter defense. MSU's key player will probably be Adreian Payne, for multiple reasons. He's athletic enough to play on the perimeter with Kelly, while still having the length to defend inside. He can step out and hit 3's and needs to be a monster on the glass, especially the offensive side. If you had to pick one key for Duke's offense and the most important player, what would you go with?

Matthews: We worry about that Nix/Plumlee matchup due to Mason's ability to pick up really silly fouls, as demonstrated in the Creighton game. I imagine (and hope) that they won't call it tightly, but I think you will have the unquestioned advantage down there either way. I am no longer expecting Kelly to be a major offensive contributor. This means that someone has to fill that void.

I am no longer expecting Kelly to be a major offensive contributor. This means that someone (Rasheed Sulaimon) has to fill that void.

That someone is Rasheed Sulaimon. Six games ago he entered into a pretty deep self-confidence funk that he officially erupted out of in that Creighton game. Much like your previous point about the Spartans, when Sulaimon is on, Duke can legitimately have a game's leading scorer come from any of the 2-5 positions. You COULD even put Quinn Cook in there, though that is more of an aberration. So far in the tourney he is 4-16 from the floor, but has 17 assists to 3 turnovers. That gives us a "pick your poison" type of offense. But I think in the end, it will ultimately be second chance points versus made threes that decides this one.

Vannini: I really could see this going either way. I worry about MSU's turnovers, but I feel good about the rebounding. Unless Duke completely goes off from 3, I'll pick a narrow MSU win, 65-63.

Matthews: The only result that would surprise me would be one where one of these teams wins by more than 8 points. For full disclosure, I had MSU advancing in my tourney bracket, but, now that we are upon the threshold, I find it hard to pick against my Devils. Cook hits a late 3 to give Duke a little breathing room after an exhausting back-and-forth affair to give the Devils a 68-63 win.

• NBA Draft: Can Ben McLemore get back on track?

• Get to know Florida Gulf Coast, best school ever