Davidson only lost once during the Southern Conference's regular-season slate and appears to be the clear favorite to secure an NCAA bid by winning the league tourney this week.

The Davidson Wildcats enter the 2013 Southern Conference Tournament with a 17-1 record in league play and will have a chance to avenge their lone loss of the conference slate if Georgia Southern gets out of its first-round meeting against Wofford.

Davidson (23-7, 17-1 SoCon) reeled off 14-straight victories after its inexplicable 70-57 loss at Georgia Southern on Jan. 14. The Wildcats got revenge on the Eagles on Saturday, earning an 83-48 victory to close out the regular season. They should take care of business again if the two teams meet on March 9 in the SoCon quarterfinals.

The Elon Phoenix are the No. 2 overall seed in the tournament after winning the North division regular season title. The Charleston Cougars and Appalachian State Mountaineers secured the final two first-round byes as the No. 3 and 4 seeds overall.

The full schedule is included below. All games will be played at the U.S. Cellular Center in Asheville, N.C. and all times listed are ET.

Here is the full tournament schedule in bracket form, courtesy of the Southern Conference: 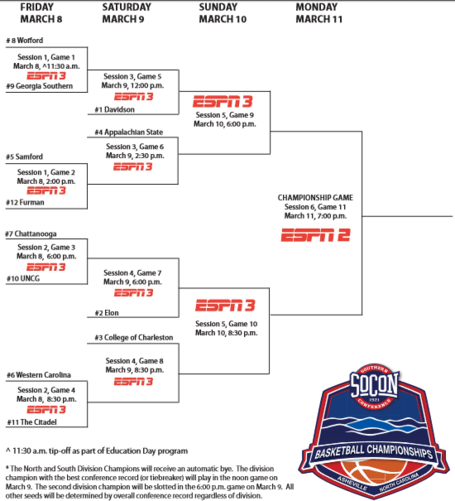