There is no joy in Dunk City this morning. The mighty Eagles have fallen.

The most enticing story of the 2013 NCAA Tournament came to a close on Friday night when the Florida Gulf Coast Eagles were bounced from the tournament by longtime in-state rival Florida. That was a joke, because, you see, FGCU opened like five months ago or something. I've only been paying attention to the dunks.

Despite the disappointment of the Eagles not becoming the first 15 seed to crash the Elite 8, Friday was still a pretty stellar night for hoops. One clash of the titans, in particular, stood out.

Forget game of the night, we may not have seen a better game this season.

Michigan trailed by 14 with under seven minutes remaining and by eight with 1:22 to play. And then Trey Burke happened.

The potential national Player of the Year scored eight points over the final 1:12 of regulation, including a 30-foot shot with under five seconds to play to tie the score at 76. Naadir Tharpe's potential game-winner on the other end of the floor came up short and the fans at Cowboys Stadium were treated to the first overtime game of this tournament.

The lead changed hands five times in the extra period, but Michigan grabbed it for good when Mitch McGary's short jumper put the Wolverines ahead, 83-82. Kansas had the ball down two with nine seconds to play, but a disjointed possession ended with another miss from Tharpe at the buzzer.

Jayhawk fans were (and still are) upset that it wasn't freshman star Ben McLemore, who finished with a team-high 20 points, taking the shots at the end of regulation or overtime. There's also been plenty of blame chucked in the direction of point guard Elijah Johnson, who missed a free-throw with 12 seconds left that would have put Kansas up four, and who unnecessarily gave McGary a shot below the belt during the first half.

The Wolverines are headed to the Elite Eight for the first time since 1994. I said it even when he wasn't having success in the tournament, but I truly believe John Beilein is one of the five best coaches in the game.

Team That Won it the Best: Duke

Louisville, the team Duke will play for a spot in the Final Four on Sunday, might be the only team that has appeared superior to the Blue Devils through three rounds of the tournament. And that's debatable.

Seth Curry buried six three-pointers and scored a game-high 29 points as Duke ran its all-time record in Indianapolis to 7-1. But it was on the defensive end where the Blue Devils put on the most impressive show, holding Michigan State to just seven made field goals in the second half and 30.4 percent shooting for the game. Big Ten Freshman of the Year Gary Harris was particularly frustrated, scoring just six points on 2-of-11 shooting.

I know, I know, I feel bad about this, too. Kansas could have easily earned the nod here with their late-game collapse, but I'm going with the darlings of the tournament.

For the past week we've talked about how Florida Gulf Coast "isn't your average 15 seed," but now that they're out of the tournament, the Eagles' seed is being used as an excuse for their sub-par effort on Friday. The fact is, FGCU had a real shot to win this game, and they threw it away by not doing any of the things that got them through the first weekend of the big dance.

It was an incredible run for Dunk City. It's just a shame that it didn't end with a proper level of drama.

There were plenty of candidates to choose from on Friday, but let's go with the guy who became just the fifth player in history to score more than 20 points and dish out at least 10 assists in a Sweet 16 game. He scored all 23 of his points after halftime, including the 30-foot bomb to send the game into overtime.

Highlight of the Day:

Did you say 30-foot bomb to send the game into overtime?

Russ Smith, Louisville - Despite playing with what his coach and teammates called flu-like symptoms, Smith matched Khalif Wyatt's tournament high with 31 points. He's now the NCAA Tournament leader in points and steals, and ranks second in made field goals.

Mitch McGary, Michigan- Scary McGary hit 12-of-17 shots and scored a game-high 25 points to go with his game-high 14 rebounds. He joins Blake Griffin (2009) as the only two players in the last 15 seasons with consecutive games of more than 21 points and 14 rebounds in the tournament.

Seth Curry, Duke - The Blue Devil sharp-shooter drilled 6-of-9 from beyond the arc and all seven of his free-throw attempts to finish with a game-high 29 points.

Ben McLemore, Kansas - In what will likely be his final college game, the freshman All-American led his team with 20 points.

Arsalan Kazemi, Oregon - The transfer from Rice finished with double-digit rebounding efforts in all three of Oregon's NCAA Tournament games, and broke the school record for career rebounds in the tournament. He grabbed 12 of them on Friday to go with his 11 points.

I know we've discussed it twice already, but I mean seriously, look at this thing. 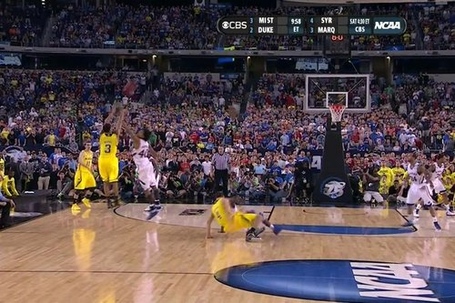 That's going to be awfully tough to top for shot of the tournament.

The upsets have been fun and all, but it's nice to see at least one region hold true to form. Louisville, the last No. 1 seed standing, taking on No. 2 seed Duke is easily the showcase game of the Elite Eight.

Even though I'm pretty sure he came to this game by himself.

Forget the missed free throw and the inexplicable reluctance to get Ben McLemore the ball in key situations, Johnson earns his spot here because of this totally unnecessary nut shot on Mitch McGary.

Johnson received a flagrant one for the cheap shot.

According to a number of reports, Lucas Oil Stadium security members were all given pictures of the infamous "runner" (or whatever he is) and instructed not to let him inside unless he was properly credentialed. He made it in anyway and enjoyed the Louisville/Oregon game.

The man just wants to watch the game. Leave him be.

• The best and worst from a sweet Friday

• Joakim Noah is more interested in Florida than Craig Sager