The defending Women's NCAA Tournament champions suffered a stunning upset in the Sweet 16, as the No. 1 Baylor Lady Bears lost 82-81 to the No. 5 Louisville Cardinals.

The Lady Bears, led by senior center Brittney Griner, have been the most dominant women's basketball team over the past two seasons. Last season, Baylor became the first team in college basketball history to go 40-0 and won every single tournament game by double-digits. The Lady Bears were 34-1 heading into Sunday's matchup, their only loss a 71-69 defeat to fellow No. 1 seed Stanford Cardinal. 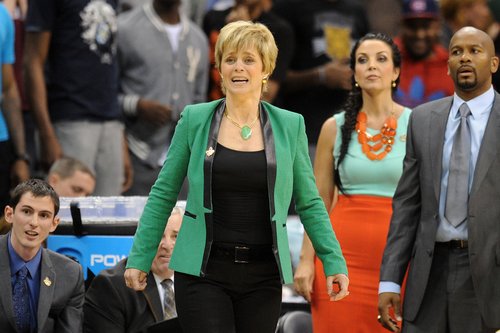 Read more about this amazing game and stunning upset.

The Cardinals caught fire behind the three-point line, sinking 16 of their 25 shots from behind the arc. They also were effective in neutralizing Griner, as she went 4-10 from the field

Lousiville led by as many as 19 points in the second half, but Baylor came charging back, cutting the lead to one with 35 seconds left. Monique Reed missed the front end of a one-one, giving Baylor a chance to take the lead. Sara Hammond then drew a charge against Jordan Madden with 16 seconds left, giving Louisville another chance to extend their lead.

The Cardinals proceeded to turn the ball over on the in-bounds pass, allowing Odyssey Sims to recover the ball and draw a foul while shooting. Sims sank both free throws, giving Baylor a one-point lead.

Reed took the ball on the next in-bounds pass, and drew a foul against Griner driving to the basket with 2.6 seconds. Reed sank both free throw, and the Lady Bears missed a desperation three, ending the game.

The No. 1 Notre Dame Fighting Irish had no issues against their Sweet 16 opponent, blowing out the No. 12 Kansas Jayhawks 93-63. Skylar Diggins had a monster performance, scoring 27 points and dishing out nine assists. Diggins also passed assistant coach Beth Cunningham for the most points in school history.

The No. 2 Duke Blue Devils used stifling defense to survive their matchup against the No. 6 Nebraska Cornhuskers, as they won 53-45. Nebraska shot 30 percent from the field, and only made three of their 24 three-point attempts. Tricia Liston led the Blue Devils on offense with 17 points and eight rebounds.

The No. 2 Tennessee Lady Volunteers ran through an overmatched opponent, as they defeated the No. 6 Oklahoma Sooners 74-59. Tennessee also played tough defense, as Oklahoma shot 31 percent from the field and sank five of their 29 three-point attempts. The Lady Volunteers had a balanced scoring effort, led by Kamiko Williams with 15 points.