One night in Dunk City

Spencer Hall watched Florida Gulf Coast's loss to Florida in the heart of Dunk City, a.k.a. a giant strip mall.

Share All sharing options for: One night in Dunk City

A video billboard alternates advertisements for joint replacement surgery and affordable flights to Ottawa. Just down the same road an advertisement for personal injury baron lawyers Morgan and Morgan announces "LOVE GOD, LOVE PEOPLE" over the roof of the Shoot Straight gun shop and firing range. Sitting at that same light, three cars in front of me bear license plate frames announcing their affiliations in order from right to left: Florida State, University of South Florida, and the University of Florida.

An entire store on US 41 just reads: "Electronic Cigarettes: Parts, Accessories, and More." It is a freestanding store located next to Casual Male XL, a gold-buying exchange, The Money Store (check cashing and payday advances), and an animal hospital.

Finally, booming over the parking lot of The Mattress City, stands a Florida Gulf Coast University billboard. In green and white, it reads DUNK CITY. That's the Mattress City just catty-corner from the Five Guys, and just down the street from your average fortress-like khaki groom's cake of a Walgreen's.

This is Fort Myers, Dunk City, home of Florida Gulf Coast University and their basketball team. 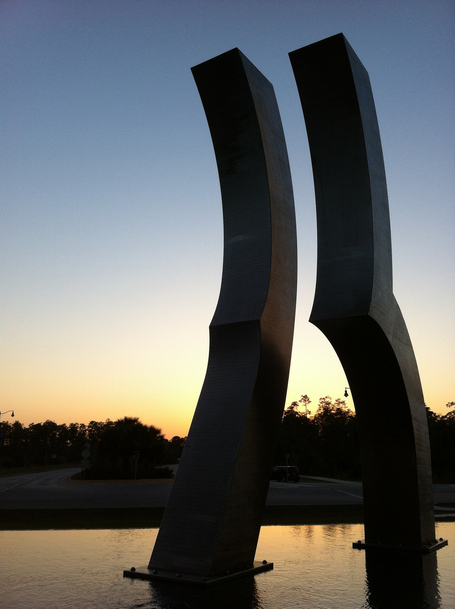 The song playing on the radio on the drive into FGCU's campus is "Shots" by LMFAO. The campus itself is empty on a Friday afternoon, and resembles a very nice television high school, i.e. the kind that do not exist in real life because they are actually shot at places like Florida Gulf Coast University, and populated by thirty-year-old actors.

There is a metal sculpture that resembles a giant pair of tweezers rising from the earth at its entrance. In 68 degrees of humid Florida spring, this is all very pleasant. When it is 98 degrees and hell's spotlight is blazing down from the cosmos, anyone standing within fifteen feet of it would be fried alive like chickens in a Tesla Coil. 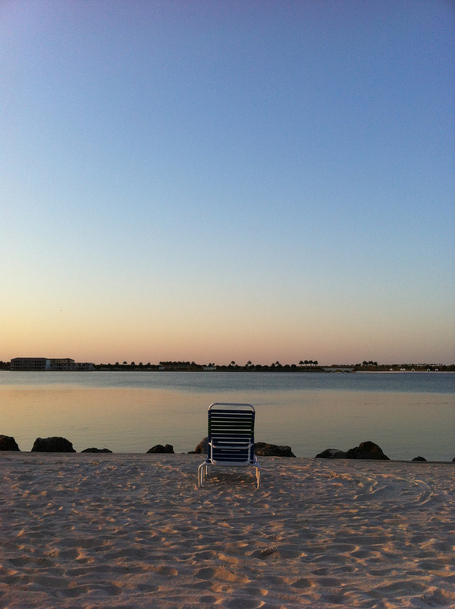 The beach is the part you may have seen. Dude it's the school with a beach I've done everything wroooooong with my life. You may have, but how much any of that has to do with Florida Gulf Coast University's Lakeside Village is debatable. "The Light" by Common plays somewhere from a window. The buildings are pastel stucco, and indistinguishable from a thousand retirement communities or apartment complexes poured into existence across the state of Florida. One building bears a sign: "HONORS DORM."

The beach is brilliant white sand trucked in from somewhere else. The lake is a brackish and surprisingly deep, and white cabanas flutter in the breeze across the lake. There is a subdivision with luxury homes across from the school, and a golf course past that, and then an open-air mall, and then six lanes of highway bordered by the random commercial activity that makes up whatever the Florida economy is.

The music has changed to Kendrick Lamar's "Blow My High." Inner tubing on the lake is included with the cost of tuition along with paddleboarding and other watersports. Walking away and into the parking lot, a very earnest couple is having a discussion.

Her: "I'm so tired of you bashing my religion, that's all."

It is the most nineteen-year-old discussion you could ever overhear. Both students are older than the school itself.

FGCU's basketball arena was playing "In The Air Tonight" to no one in particular, so I checked my voicemail and found a voicemail from an FGCU official. There would be no place on campus to watch the game, so I should head next door to Gulf Coast Town Center, where various FGCU alumni groups had watch parties planned. 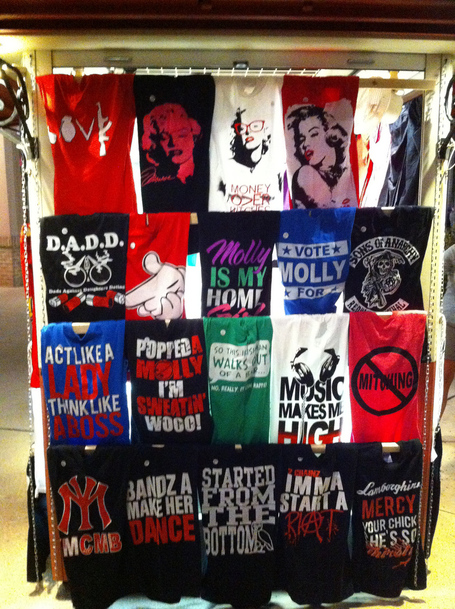 The part I was headed to was at Bar Louie. To get there you get off Ben Hill Griffin Parkway, and go past the Pollo Tropical and Super Target to hang a left at the JC Penney's (which is right in front of the Costco). Go past Belk's, the Verizon store, the Bath and Body Works, the Kay Jewelers, The Pita Pit, and the fudge store, and whatever you do don't make a right, because the Outback and the Carrabba's are down there, and both are absolutely packed on a Friday night. There's also a cigar bar down there: fat men with goatees and Tommy Bahama shirts sit in the chairs puffing away while their wives get destroyed on red wine.

Pincher's Crab Shack, playing "Pink Houses" by John Mellencamp, is just down the way on the corner. It has a line out the door.

Turn the right way, and head past the glow-in-the-dark putt-putt place and the Cold Stone Creamery and the t-shirt stands full of shirts with "BANDZ A MAKE HER DANCE" and "MOLLY IS MY HOMEGIRL" and the bar Blu where Tom Haverford would hang out if he lived in Ft. Myers, and there, across from the Ron Jon Surf Shop, is Bar Louie. 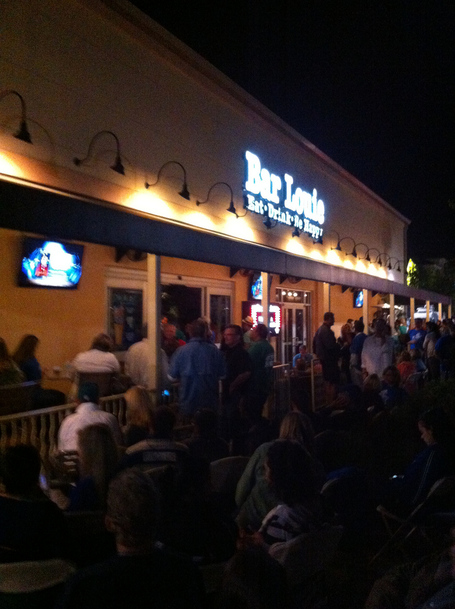 Florida Gulf Coast students exist. They are well-groomed people between the ages of 18 and 25 with good orthodontics and gym-toned asses, mostly commuter students from the Ft. Myers/Naples area. The groups of young men communicate exclusively in fist bumps and dated cultural references. Next to me, a group of guys say nothing but "Ba-ba-BOUIEEE!" in reaction to anything for the better part of an hour. The girls make high-pitched noises and run wedge formations through crowds to bumrush the bathroom.

As a group, they seem to have a hard time deciding on precisely how to start existing as a group. They come to an agreement that they can collectively chant the initials of the school, and agree that "Fuck Florida!" is a compelling rallying cry. Besides that, there is no real coordination besides batting an inflatable gator around and cheering loudly whenever FGCU, rolling in the first ten minutes of the game, dunks home a lob or hits an improbable moonball three-pointer.

At 8:27 p.m. the DJ decides the occasion has achieved Pitbull status.

There are also just Florida Gulf Coast people: retirees with camp chairs, the kind who show up everywhere ready to sit with a camp chair and nod along at whatever is happening, fat men in track suits, confused thirtysomething women wearing cocktail dresses and makeup, teenagers giddy at the freedom of an open air mall on a Friday night saying "hey bro!" to anyone who passes. A pickup truck with a Confederate flag mounted in the back, two fishing poles leaning against the tailgate, a sticker that says "Bucked Up!", and two white boys no older than 25 with Realtree baseball caps on rolls past a group of booze-addled FGCU fans. They are blasting 2 Chainz and nodding.

Local news crews have centered in on one man in particular, a leathery middle-aged man with a mustache, sport-fishing hair, and a Tommy Bahama shirt. (Another one.) His praying mantis-green Mustang has "DUNK CITY" emblazoned across the front, and a magnetic FGCU logo slapped on the side. 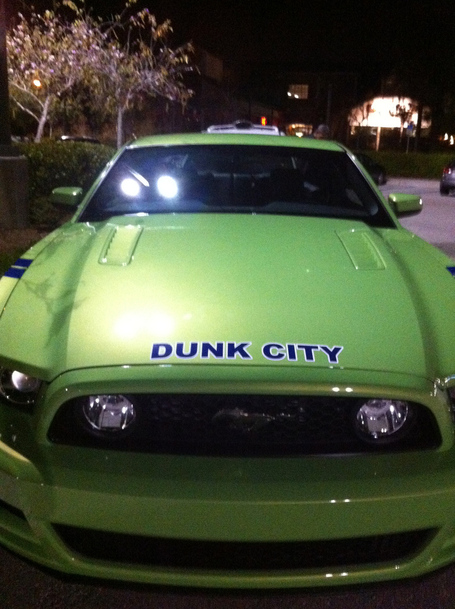 News crews ask him to re-enact his entry no less than twice. He obliges each time with a professional level of enthusiasm. 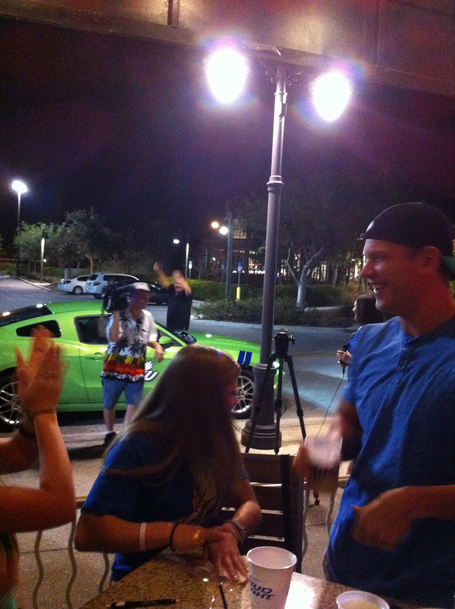 As incoherent as the Florida Gulf Coast fan experience might be -- watching a game in a super-sized strip mall with commuter students, lizards of the Southwestern Florida nightlife, camping senior citizens, families letting the kids run loose while they watch the big screen set up in the bandshell, and the lonely musician hired to sing "P.Y.T." over a drum machine in the pregame -- there are a few constants. 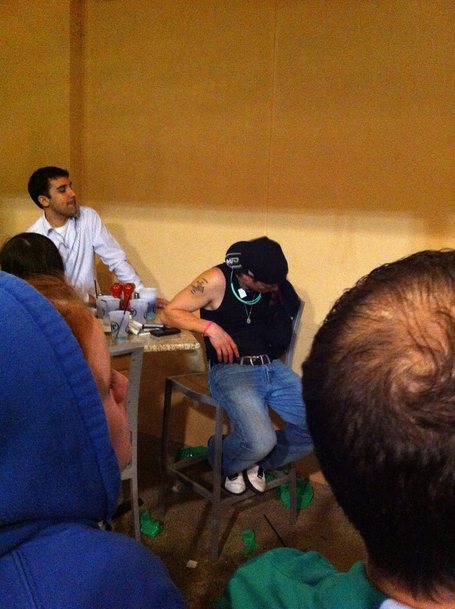 At every location where more than 10 people have congregated to watch a sporting event, there is a man wearing an Ohio State fitted cap. This fitted is worn backwards. This Ohio State fan will be loud. He did not attend Ohio State. He will triangulate his interest in the sporting event based on its relation to Ohio State's interests as determined by him and him alone. These interests will make no sense whatsoever, and will be defended loudly.

As Florida clamps down and begins bogging down Dunk City with defense, the representative Ohio State random commences melting down. He screams "Fuck the Gators" long after the crowd settles into drunken detachment, throwing up his arms theatrically at every missed shot and turnover. "YOU SUCK!" accompanies every Florida free throw. He stands up, sits down, and fiddles with the arrangement of flatbreads and nachos nervously.

When the end is near, he molts his Dunk City shirt and simply sits, semi-despondent in a black sleeveless t-shirt, waiting for the next warm breeze to carry him to another sporting even he could use to root against some hated enemy of the state he had not yet met.

In other countries, these are the men who shoot children for dictators. 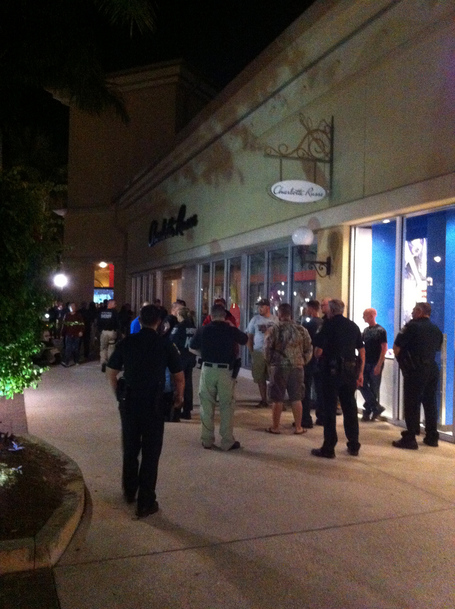 At 10:22 p.m., in front of the Charlotte Russe women's wear store, I see the first public urination incident of the night, a gawky student in shorts and a tropical print shirt. I ask him what he's doing. He answers: "Peeing. Yeah."

If FGCU had won, maybe there would have been a mall riot. I would have gotten to see so many things I desperately want to see happen: a Bass Pro Shops looted, and then the ensuing battle over the Bass Pro Shops, war waged from the fishing section over to the camping gear, the savage fight for the high ground of the fake waterfall, the vicious rear guard action around the fish tanks, the hunting decoys watching the fight impassively from above. 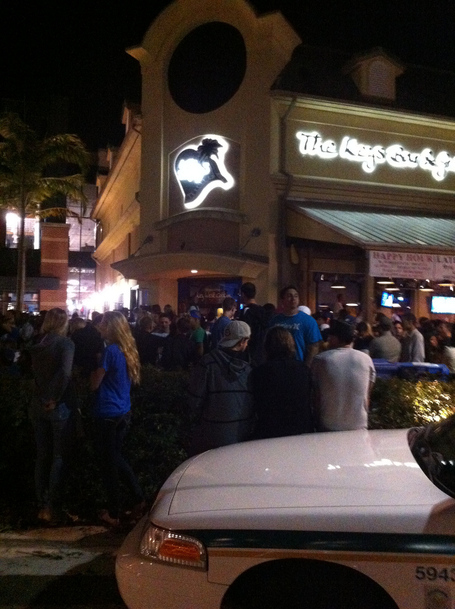 FGCU fans used police cars as a bench. A K-9 unit barked loudly from another. No fewer than 10 police officers surrounded two people arguing loudly about the definition of assault. Otherwise, the incoherent collection of people who came to watch Florida Gulf Coast play basketball melted back into the dark of a very dark night. It was anticlimax, but the climax for Florida Gulf Coast really came when they beat Georgetown. Most of the students I talked to hadn't been to a game all season, and sort of bolted awake when their team dunked their way into the national consciousness over a brand name.

Like everything else in Florida, Florida Gulf Coast fandom didn't exist until it suddenly did, and then the rest had to be invented on the fly, and in a hurry. There was nothing, and then something, and in between something and a proper thing, they would have it at the mini-mall, and perhaps make t-shirts for the moment. 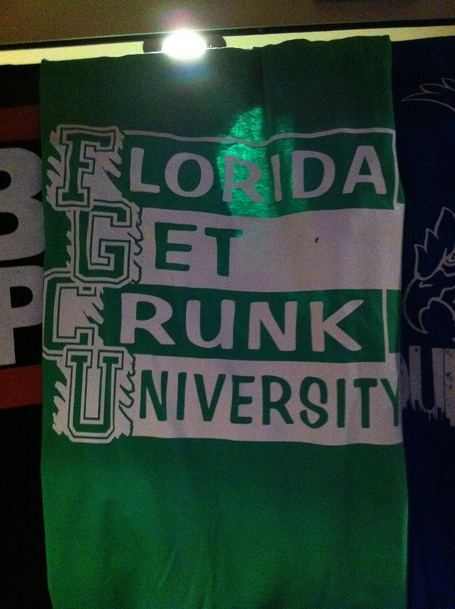 In the dregs of the game's second half I asked my host, a student at Florida Gulf Coast, if he knew about the university planning to add a body farm to their facilities.

"Yeah, where they just leave it out to decompose. Just bodies everywhere for research."

He paused, and then nodded.