After seeing one of their teammates go down in one of the most horrifying ways imaginable, the Louisville Cardinals banded together to earn their second consecutive trip to the Final Four.

INDIANAPOLIS — For a couple of seconds, I thought Kevin Ware had simply done something funny. It was the only explanation I could think of for the over-the-top reaction I'd just seen from Louisville's bench.

It seemed strange for a team to be laughing at something when an opposing player had just drilled a three-pointer in a hotly contested Elite 8 game, but what else could have happened to make an entire group of people jump at the same time and hold onto one another?

That rationalization was shattered when I looked back at the court and saw three Cardinals off their feet. Wayne Blackshear was on his knees, staring at the floor. Chane Behanan was lying in a ball, sobbing. Peyton Siva was on one knee, praying.

And then I looked back at Ware. I saw him lifting the top half of his leg into the air with his hands, and I saw the lower half of his leg dangling sickeningly perpendicular to the ground. I thought I saw his bone, but I wasn't sure. I also didn't want to believe it.

There's no way to adequately prepare yourself to witness something that shockingly abnormal, but when you're forced to process it without any forewarning, the natural reaction is almost indescribable. Louisville players, who were literally at eye level with the injury because of the elevated court at Lucas Oil Stadium, vomited on the sidelines. Rick Pitino wiped away tears. So did hundreds of people in the crowd who had never met Ware.

No one on the Louisville team wanted the game to go on. Except Kevin Ware.

"When it happened, he said to me five times, 'I'm OK, win the game,' so I got the team together and I said, 'Hey listen to him. He has something to say to you,'" Pitino said after the game. "He must have said it 100 times. It had to come from him, and it did."

"He was in a lot of pain, so much pain," Behanan added. "But he called us over and told us not to worry about him. He didn't even care about his leg. He cared about us. I don't know how he did that."

The words allowed the Cardinals to play on, but the shock of the moment was still evident.

Russ Smith was still wiping away tears as he threw the ball inbounds to resume play. Behanan, Ware's best friend on the team, had to be taken out of the game until after the under four timeout. The U of L bench, which had stood for the duration of the game's first 14 minutes, sat and clapped softly after made buckets, as if it wouldn't be right to cheer too much for anything.

Louisville somehow managed to go into halftime with a 35-32 halftime lead, but Pitino knew it was a lead that wouldn't hold if the team's mood didn't change dramatically. 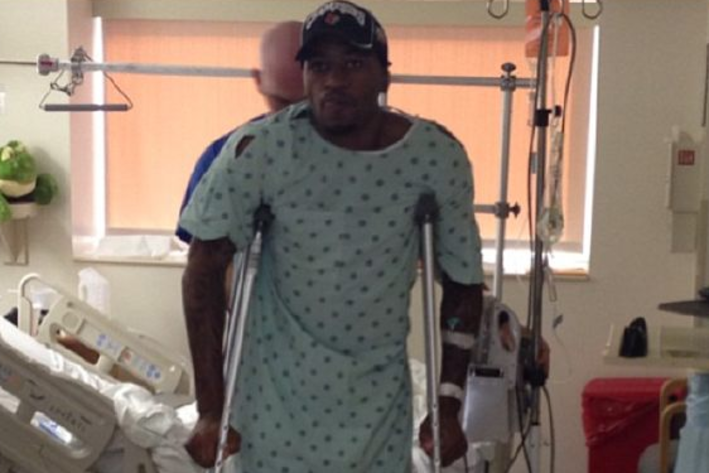 From CardChronicle.com: Kevin Ware is already walking on crutches following surgery on his injured leg.

"I told the guys that if we don't get Kevin home to Atlanta [site of the Final Four], then it wasn't worth it to play this season," Pitino said. "I said if we let up from our game plan for one second, then Kevin Ware doesn't mean how much he means to us."

The Cardinal bench was not sitting when play resumed in the second half.

Still, Duke bounced back from a five-point deficit to tie the score at 42. With U of L stars Peyton Siva and Gorgui Dieng each saddled with three fouls, a fourth straight dominating performance by the Cardinals appeared to be among the most unlikeliest of scenarios.

Then, as tends to happen with this Louisville team, the Cardinals dropped the hammer seemingly out of nowhere.

Smith scored and was fouled, Siva drilled a jumper and then hit a lay-up, Gorgui Dieng - the junior center who missed Louisville's first meeting with Duke back in November - scored on four of the Cardinals' next six possessions. When the smoke finally cleared, it was a 17-2 U of L run that put to bed any doubt as to which team would be moving on to Atlanta.

Louisville won the game by 22 points.

After the final horn sounded, the Cardinals paraded two trophies around the Indianapolis court: The Midwest Regional championship trophy, and Ware's No. 5 jersey. It was clear which one meant more to them.

Pitino interrupted the announcement of the region's All-Tournament team to ask if the crowd could chant "KEVIN" for a couple of minutes. When they obliged, a few of the players began to tear up again.

Louisville now heads to the Final Four for the second consecutive season, this time as the prohibitive favorites instead of the massive underdogs they were against Kentucky 12 months ago. As for Ware, a night after he was paid a visit by the trophy he asked his teammates to win for him, the Atlanta native is already walking around on crutches and planning to make the trip back home with his squad.

Even if Ware himself winds up not being able to make the trip with Louisville, there's no doubt that his words will.