Kentucky shouldn't have much trouble bouncing back from a disappointing 2012-13 thanks to its record six McDonald's All-Americans from the 2013 class.

CHICAGO -- Kentucky basketball seasons aren't supposed to end in the NIT, not in a gym as small and quaint as Robert Morris', not in the first round of the inferior tournament against a Colonials team that only gave meaningful minutes to one player taller than 6'7. Kentucky basketball, it's said, is supposed to reload, not rebuild.

Perhaps it would have been impossible for any group of college kids to follow up Kentucky's dominant 2012 national title team, the one that sent six players to the NBA and made plenty of people wonder if they were actually good enough to beat the Charlotte Bobcats or another professional bottom-feeder. But after an utterly frustrating and disappointing season for Kentucky, there's a new set of reinforcements again ready to storm college basketball.

Even as the basketball world turns its attention to the Final Four, there's a lingering sense to anyone paying attention that Kentucky will be a force again next season. Some are saying John Calipari's 2013 recruiting class is the greatest all-time, with a record six players chosen for the McDonald's All-American Game, set to be played on Wednesday in Chicago.

The significance isn't lost on any of the Wildcats' prized recruits.

"I wouldn't just call it chatter," said Marcus Lee, a lanky 6'10 big man from California ranked No. 18 overall by ESPN. "We haven't stopped talking about it. The other players are tired of us talking about it. We're very excited."

Since Calipari took over in 2009, Kentucky has positioned itself in a world floating somewhere between the NCAA and NBA.

It's hard to blame them. Since Calipari took over in 2009, Kentucky has positioned itself in a world floating somewhere between the NCAA and NBA. Lexington is now a veritable breeding ground for the high-level talent that is barred from joining the professional ranks right out of high school. It's impossible to argue with the results. Kentucky isn't single-handidly responsible for replenishing the NBA with young stars, but it often feels that way.

Kentucky has made top 10 NBA draft picks out of six players in the last three years, and Nerlens Noel will become the seventh in June even after tearing his ACL during conference play. John Wall, Anthony Davis and DeMarcus Cousins are thought to each harbor the potential to become perennial NBA All-Stars. Eric Bledsoe, Michael Kidd-Gilchrist and Brandon Knight are already contributing big minutes and solid production early into their professional careers. All told, Kentucky has produced 16 players in three years under Calipari currently playing in the NBA.

What's scary is the near universal recognition that the group he has coming in is the coach's best work yet.

What is it about Calipari? Why has he been able to continually secure the most talented high school players in America dating back to the days he brought Dajuan Wagner, Derrick Rose and Tyreke Evans to Memphis?

"What a lot of people don't know is that he's a family guy," said James Young, a smooth 6'6 wing from Detroit. "I'm a family guy. My family and him connect. When he came down to visit, we just got closer as a family.

"Kentucky has always been my dream school growing up. I've seen all the great history they've had. It's a great atmosphere, a great college campus. The coaches are awesome."

No matter what position you play, Calipari can point to a young NBA star he helped developed and also get very rich.

It's one of the sentiments repeated by nearly every Kentucky commit: Calipari and his staff have a certain way of making the players feel comfortable while still challenging them. No matter what position you play, Calipari can point to a young NBA star he helped developed and also get very rich.

"I liked the coaching staff and the way they play basketball," said Andrew Harrison, the top-rated point guard recruit who chose Kentucky over Maryland along with his twin brother, Aaron, in October. "They push the ball. It's a guard-oriented game, really. I feel like it fits me well." 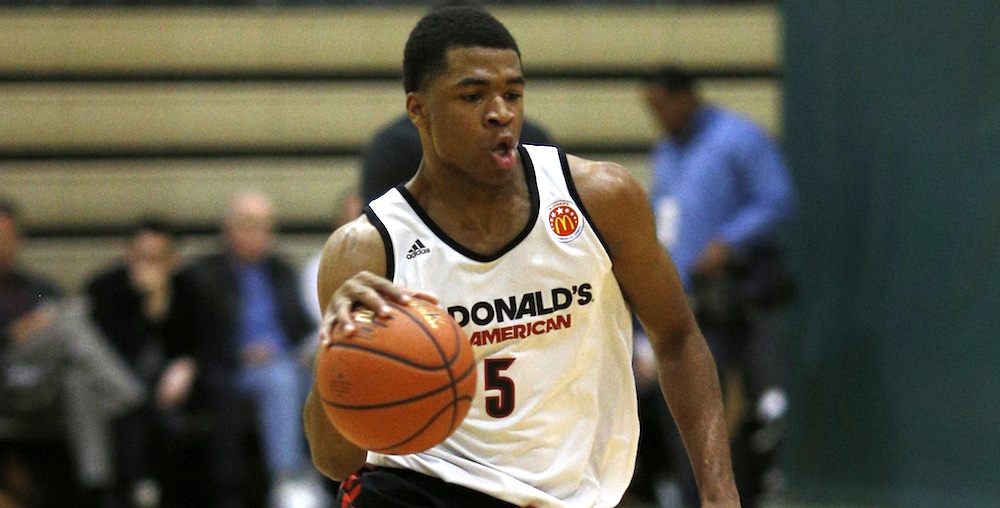 It's remarkable how well the pieces complement each other. The Harrisons will hold down the backcourt, Young will provide athleticism on the wing, Julius Randle is set to give the Wildcats a Cousins-like force on the inside, while Dakari Johnson protects and the paint and crashes the boards. Lee's size and skill set fits right in, too.

"Fab Five" comparisons might seem premature, but they aren't too far-fetched.

"You know there's going to be a lot of good players around you," said Randle. "In high school, you face double and triple teams. (At Kentucky), there's a lot of other players that can help you. And you'll get better. I felt like that's the best place I can win a national championship."

It's the commitment of Randle that really pushes Calipari's class to historic heights. The Texas-bred big man was the most physically impressive player at Monday's practice, flushing alley-oops with ease and proving to be a terror on the glass. He has a handle and nice shooting stroke too, which he proved by draining a few three-pointers during the East squad's scrimmage. The class of 2013 is loaded with NBA-looking wing players, but no one in the class can match Randle's power on the inside. He projects as a prototypical NBA four in the mold of Amar'e Stoudemire or Zach Randolph. 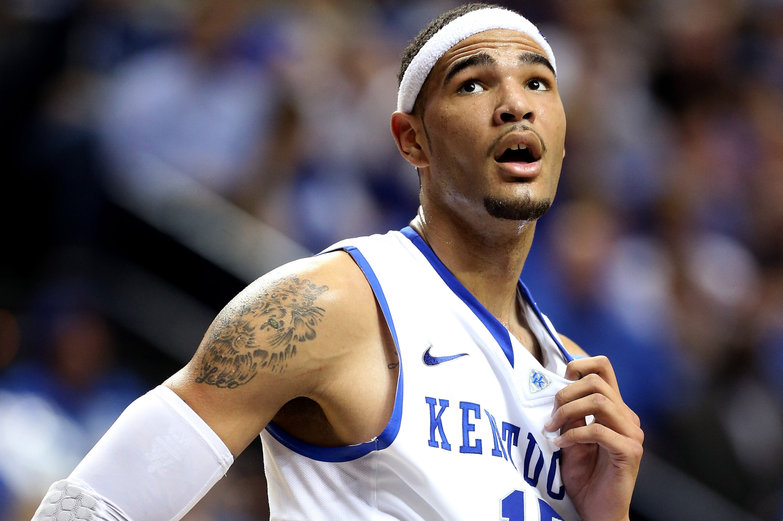 Willie Cauley-Stein, a seven-foot, 244-pound freshman, announced this week that he's returning for a second season at UK.

"When you have more than one or two people from the McDonald's Game, you know it's going to be a really good class," said Andrew Harrison. "We still know we need to go in and work hard even though we have a lot of talent on our team."

No one is handing the Wildcats the 2014 national championship just yet, but their talent edge should be overwhelming against nearly every opponent. Kentucky got even stronger on Monday when 7-footer Willie Cauley-Stein and 6'10 bruiser forward/center Kyle Wiltjer announced they're returning for their sophomore and junior seasons, respectively. The Wildcats' advantage inside almost seems unfair.

It's all a testament to Calipari. Jay-Z once boasted he could sell water to a well, but Calipari is basically doing it.

"What draws most of us is when he told us time wasn't given to us, we have to earn it," said Lee. "It's just something he stressed the most, that we have to work to get where we we're needed."

It sounds like the type of cliche athletes always repeat, but there's something to be said for Calipari making everyone believe it.