Andrew Wiggins is the anti-LeBron

Andrew Wiggins is as talented as any high school basketball player in the last 10 years, but the Canadian-born wing doesn't seem to know what all the fuss is about.

Share All sharing options for: Andrew Wiggins is the anti-LeBron

CHICAGO — Attack Athletics is a beautiful gym on the west side of Chicago built by trainer Tim Grover and backed by Michael Jordan. On Monday, for the first practice of the McDonald's All-American Game, the gym is split in half.

On one side, it's media, with reporters from all over the country gathering to get a last look or a first look at what some consider the strongest class of high school basketball players since 2007, a group that produced Derrick Rose, Blake Griffin, James Harden and Eric Gordon, among others. There are plenty of folks from Kentucky. On the other side, it's all NBA scouts.

One of the perks to showing up at these things early is not knowing the rules. As I walk into the gym, I follow the rest of the crowd. I quickly realize I am on the wrong side. The person I follow is Atlanta Hawks GM Danny Ferry. Ferry is just one of a few NBA general managers in the building -- San Antonio's R.C. Buford, Oklahoma City's Sam Presti and Orlando's Rob Hennigan are also in the house, as are scouts from seemingly every team in the league. The 2013 NBA Draft is on the horizon, but anyone paying attention knows the real gems are coming out next year.

"Everyone is telling me he might be the best prospect since LeBron." -An NBA scout watching Wiggins

With a divider separating the East squad and the West squad, Attack Athletics turns into a big game of NBA musical chairs. Scouts from the Hawks, Pacers and Suns take turns sitting next to me and we take turns picking each others brains on the players we're watching. I ask the scout from Indiana who he was most interested in seeing.

"Andrew Wiggins. Everyone is telling me he might be the best prospect since LeBron." 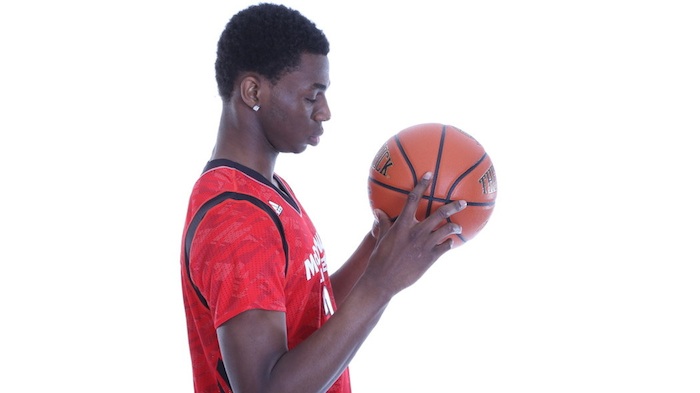 Those are some heavy words for an 18-year old coming from NBA personnel. The scout says Wiggins' athleticism is at "that most elite level," and we quickly find out why. In halfcourt sets, Wiggins isn't forcing anything. He's spacing the floor, feeding the ball to could-be Kentucky teammate Julius Randle and generally not attempting to stand out in any way. In transition? Wiggins proves he can fly.

This point is hammered home later in the evening during the annual dunk contest on the campus of University of Chicago. If anyone thought reports of Wiggins' athleticism were exaggerated, he quickly squashed them.

After a relatively safe first dunk, Wiggins brings the ball behind his back in midair for dunk No. 2. It's impressive. He ups the ante on his next attempt by doing the same thing with a 360. He finishes his performance by putting the ball between his legs with a 360. The dunk nearly blows the roof off the Hyde Park gym.

Wiggins' brother Nick plays on Witchita State's Final Four team. At media day on Tuesday, Andrew is told his brother tweeted that he was surprised so many people weren't aware of his leaping ability before the McDonald's contest.

Did you see the tweet? What did you think?

Do you have a name for that dunk?

Spend some time talking to Andrew Wiggins and you quickly realize he's far from LeBron James. Wiggins doesn't seem impressed by anything he's capable of doing and doesn't appear to grasp why everyone makes such a big fuss about it.

We should be clear: no one is directly comparing Wiggins to James. We're just saying he could be the best high school prospect since LeBron took the basketball world by storm as a junior and senior out of Akron, Ohio. Wiggins doesn't have LeBron's passing gene. He isn't nearly as strong. His understanding of the game doesn't appear nearly as nuanced. In short, he has a long way to go, just as James did when he was at the McDonald's game in 2003.

And they're certainly different people off the court. When LeBron was in Wiggins' position in 2002, he was already crafting his image, weighing multi-million dollar offers from shoe companies and trying to figure out where to park his Hummer. This story from Dave Telep perfectly captures LeBron's sense of branding at such an early age.

During the summer before his senior season, a broken wrist kept James out of action. However, it didn't prevent him from being given superstar treatment by two shoe companies. LeBron attended the Nike All-American Camp as a spectator with a small entourage of friends and family members. After Nike rolled out the red carpet for a kid who couldn't even play, he then played the part of a shrewd businessman. Just a few days after arriving to sit courtside at Nike's camp, the teenager turned up the heat on the shoe companies by showing up at Nike's rival camp, adidas ABCD.

It was at the 2002 ABCD Camp where the first "King James" T-shirt was created. Adidas made the T-shirt for LeBron and unveiled it during a news conference held for him. At this point, LeBron was officially a rock star.

Andrew Wiggins does not want to be a rock star. He seems like the type of person who just wants to be left alone to hang out with his friends and play video games. Which is to say, Andrew Wiggins seems very much like an 18-year old.

The best class ever? 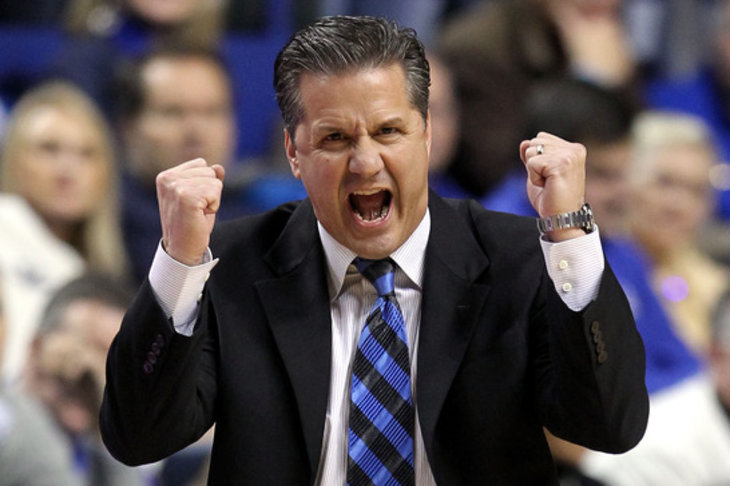 With a record six McDonald's All-Americans committed and Andrew Wiggins still a possibility, John Calipari might have the best recruiting class of all time next year at Kentucky.

A group of media goes straight to Wiggins after Monday's practice. We get in a few questions before Canadian sports network TSN sticks a camera in his face. As the only undecided player in the McDonald's Game, everyone wants to know where Wiggins is going to college. He seems very apathetic to all the inquiries. Every time someone asks Wiggins a question, he answers as succinctly as humanly possible.

Have to ask, how's the recruiting process?

Is there any pressure to make a decision?

"There's not really any pressure on my part to make a decision. I'm OK for right now."

Kentucky has six other All-Americans here. What would it be like to play with those guys? Have you thought about it?

"Yeah, I thought about it. That's one of my choices. It would be great to play with other great players."

Have they been recruiting you while you're here?

What are some of the things they've been saying to maybe sway you a bit?

"Nothing really pops up off the top off my head."

What's your timeline right now on a college decision?

What was your reaction when you heard Kentucky got Julius? 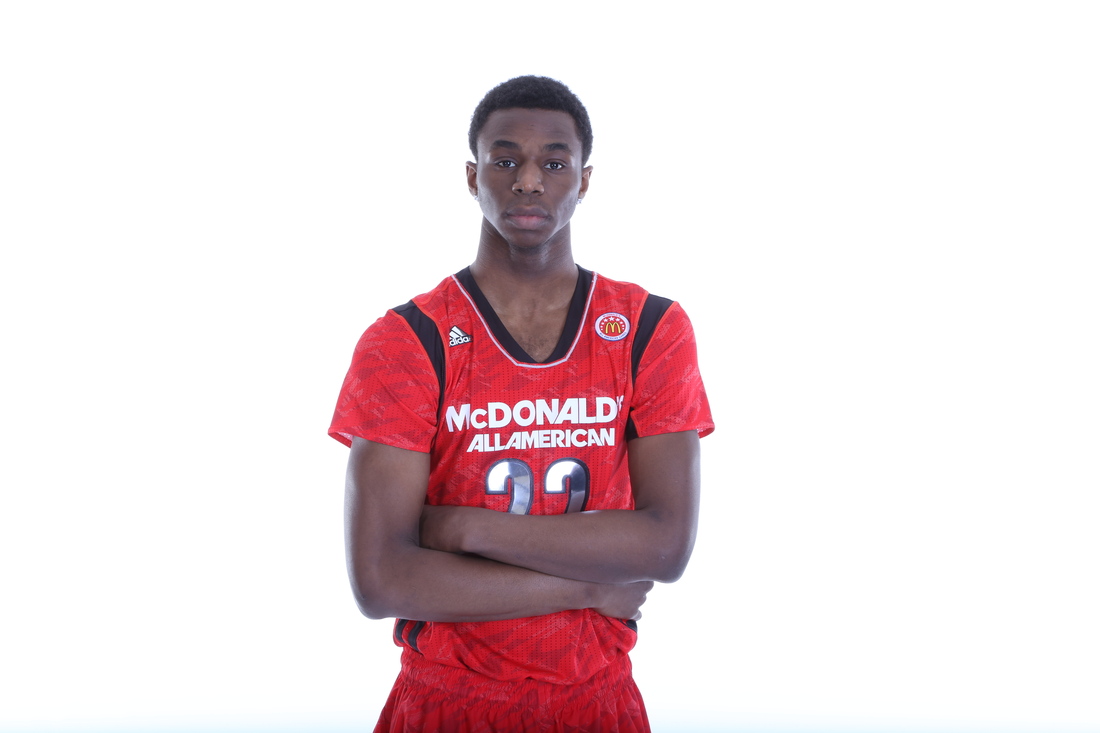 Wiggins doesn't just seem to shy away from attention, he appears to be allergic to it. This makes him unique among his peers. Chicago's Jabari Parker, widely considered the No. 2 player in the class, is basically the master of ceremonies at the event. He's smart and cool and thoughtful and clearly very savvy with the media. He seems like the type of kid who could talk to you about '60s civil rights or Kendrick Lamar. Randle acts like he's been the big man on campus his entire life -- and that isn't an insult. He has a big personality to match his multifaceted game and he's engaging in conversation.

Wiggins just seems so unimpressed with it all. He certainly isn't stupid or aloof or cold. He answers the same questions 500 times with the same brief responses. He's polite. It just seems like all the attention surrounding his college recruiting and his complete aversion to it has made him a bit dull.

It's easy to feel bad for Wiggins on Tuesday. He's seated in a director's chair in the hallway of the United Center with a bright light in his face and group of TV cameras and reporters taking turns asking the same three questions. He doesn't have a timetable for making his decision. He's not going to do it until he feels comfortable. Every school in his final four -- North Carolina, Florida State, Kentucky, Kansas -- would be a great fit. This is like running on a treadmill -- the reporters are working, but they aren't getting anywhere.

Wiggins is asked if the media attention bothers him.

Keep asking, but Wiggins isn't saying anything. He prefers it this way.

"Uhhh, I don't know," he starts. "I always try to keep my cool. Just do all the interviews I can. I know lots of players don't get the opportunity to do this, so I know that I'm blessed to get all of the attention. I can always say no (to interviews), so I don't mind doing it."

This is as far into his psyche as Wiggins will allow us. Watch the YouTube videos of his incredible high school highlights and it's easy to see why he wants his game to do the talking. It only helps perpetuate the legend and the mystery of Wiggins the basketball player.

Who is this Canadian-born athletic freak who can headbutt the rim and do 360 under-the-legs dunks like it's nothing? And where is he going to college?

Keep asking, but Wiggins isn't saying anything. He prefers it this way.

• The importance of being big at the Final 4