CHICAGO -- Starting lineup introductions at the United Center are one of the most quintessential Chicago sports experiences, right up there with a warm summer day at Wrigley Field and the raucous rendition of the national anthem that's become a calling card at every Blackhawks home game. The lights go down, the Alan Parsons Project comes on, and suddenly it feels like you're back in the '90s again listening to Ray Clay say "From North Carooooolina, at guard! , 6'6....."

You know the rest. Not much has changed about the way the Bulls announce their starters. It's enough to instantly win over anyone experiencing it live for the first time while still being able to give even the most jaded fan a set of pregame chills. But for the last 11 months, there's been something missing. Someone, more specifically: injured Bulls superstar Derrick Rose. United Center introductions just don't have the same pop when Carlos Boozer is announced last. Instead of the massive cheers reserved for Jordan and Rose, it's more of a shoulder shrug.

That changed at Wednesday's 2013 McDonald's All-American Game. The UC turned down the lights and used the same music for the high school kids, and the result was the most memorable moment of the week. When Simeon's Jabari Parker was the final player announced, the United Center roared like it hasn't for a basketball star since the last time they called Rose's name:

There was still a basketball game, albeit an exhibition, to be played, but Parker's moment was so perfect that it felt like everyone could just go home right then and there. This was an ovation four years in the making.

Wednesday was Parker's last game as a Chicagoan. From now on, he'll be announced as "From Duke" if and when he's touring the country as an NBA star. But Parker will always have Chicago in his blood and Chicago will always keep Parker close to its soul. Few things make this city prouder than producing a basketball superstar, and Parker ended his high school career on Wednesday as arguably the most distinguished player in Chicago high school history.

MORE MCDONALDS COVERAGE: Andrew Wiggins, the anti-LeBron The next Fab 5?

There's plenty of competition for that title, sure, but it's almost impossible to match Parker's resume. The son of a former NBA player, legend has it that Parker had five D-I scholarship offers by the time he was in fifth grade. He was scrimmaging against Rose as a sixth grader. The decision on where he'd attend high school was wildly hyped by the sort of people who care about this type of thing. And while at Simeon, all Jabari Parker did was ace every test he ever faced.

Neither were able to start on varsity as a freshman. Neither won four state titles. Jabari Parker did both of those things.

Simeon has produced some amazing basketball talent. The country found out about the legend of Ben Wilson last year in an ESPN 30 for 30 documentary. Rose carried the Simeon torch two decades later and honored Wilson by wearing his number. But there are a few things Ben Wilson and Derrick Rose never did in high school. Neither were able to start on varsity as a freshman. Neither won four state titles. Jabari Parker did both of those things.

Four state titles. Rose became a legend for guiding Simeon to consecutive state championships his junior and senior year, but Parker's achievement is on another level. He hardly did it by himself -- this year's Wolverines squad included three other D-I players, most notably Illinois recruit Kendrick Nunn -- but there was never a question as to who the alpha dog was. From the moment he enrolled at Simeon, it was the Jabari Parker show.

Just look at his Wikipedia page. Andrew Wiggins might be the best high school basketball prospect since LeBron James, but he only has a few short paragraphs on Wikipedia. Parker's page is over 8,000 words. It's incredible. It's 3,000 words longer than Rose's Wiki page.

It goes to show the appreciation Chicago has for Parker. He's the latest in a long list of basketball stars from this area, a list that keeps getting longer year after year. 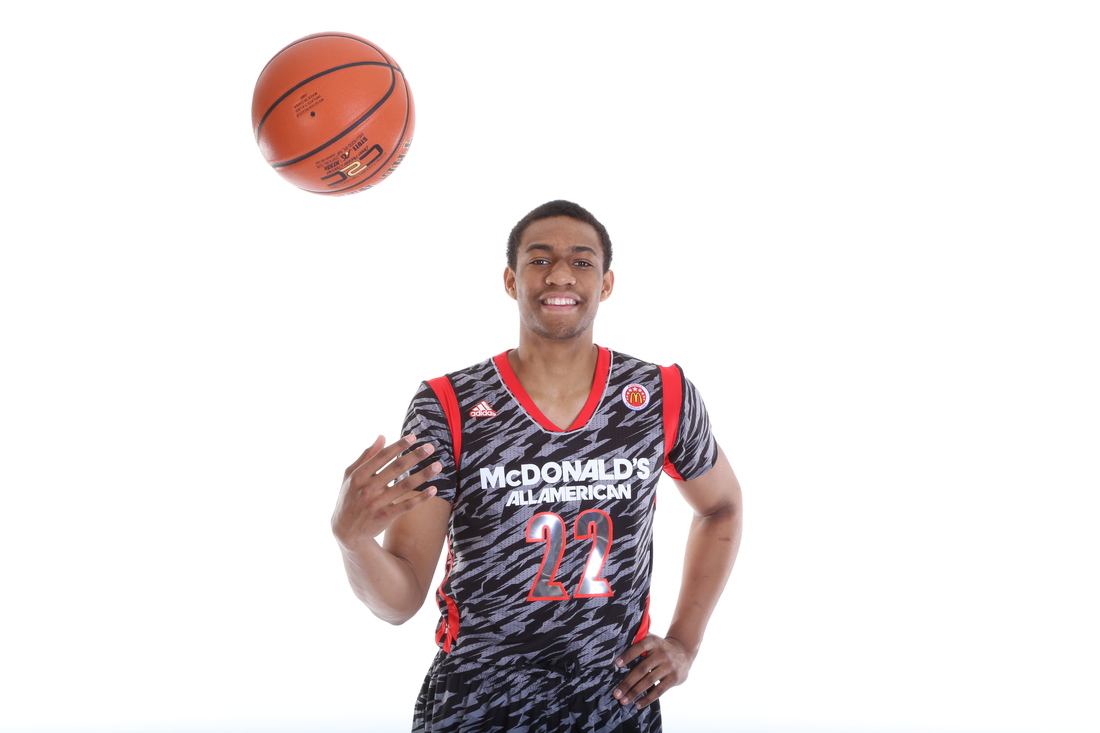 Chicago has always considered itself a basketball mecca, since the days Isiah Thomas was tearing it up at St. Joseph's in suburban Westchester to Mark Aguirre's dominant '80s run at Westinghouse and then DePaul. But over the last five years, something's changed. Chicago isn't just producing good basketball players anymore; it's producing great ones.

The new lineage starts with Rose, and it's clear he's a godfather-type figure for Chicago youth, even if he's just 24 years old. When Parker was asked who inspires him at media day, he didn't hesitate:

"Derrick Rose, I look up to that man so much," Parker said. "He's come from almost the exact same neighborhood and background. Poverty, all that stuff. Just seeing how he's been able to succeed, his work ethic, how diligent he is."

Parker was supposed to follow Rose as the next great Chicago-bred basketball player, but then a funny thing happened. A little known 6'2 guard from Perspectives grew eight inches between his sophomore and junior seasons while still retaining all of his mobility. Anthony Davis went from a Chicago high school afterthought to the best player in the country.

After a thoroughly dominant freshman season at Kentucky where he won the Wooden Award and was the best player on a national championship team, Davis became the first pick in the 2012 NBA Draft. That's two No. 1 overall NBA selections for Chicago in five years; Rose, of course, was taken No. 1 in 2008. With draft sites already projecting Parker as the No. 2 pick in the 2014 NBA draft, the trend continues.

It doesn't stop there, either. It might be a long way off, but right now the projected No. 1 pick in the 2015 NBA Draft is Jahlil Okafor, a center from Chicago's Whitney Young High School. Okafor is the No. 1 junior in the country and has every college coach begging him to spend his one-and-done season at their school.

Okafor is a thoughtful monster. At 6'10, 280 lbs., he could bring back traditional center play to the NBA. Okafor reminds you of the way centers played in the '90s. His low-post game is already incredibly polished, his passing and shooting are as advanced as any 17-year-old center you'll ever see, his footwork is remarkable. Okafor is going to be a star. There are more than a few reporters covering the area that think he's a much better prospect than Parker.

A year from now, the McDonald's All-American Game will be all about Okafor, but he still made his presence felt at this year's game. There was Okafor, walking around the United Center concourse, signing autographs.

There's hope in Chicago, and it can be found in its youngest emerging basketball stars.

"Seeing my brother Jabari Parker out there, seeing how the fans praise him, I just can't wait for that experience to possibly do that," Okafor said. "I always say we're the mecca of basketball. The best basketball players come from Chicago. I don't know what it is, it's something about the city. Maybe how tough it is."

'Tough' is one word to describe Chicago, but there are plenty of others. 'Dangerous', 'violent', 'murder capital' -- take your pick. There were 506 murders in Chicago in 2012, the most in the country. Too many of them happen on the South Side, right where Rose and Parker grew up.

The violence is never far from the mind of Parker. When asked at media day what it feels like to represent Chicago, he gave the type of prudent answer that's come to be expected from him.

"We try to represent the city as much as possible, especially in a positive way," said Parker. "I know that the news really illuminates Chicago as being a really negative city where violence arises. We just try to do our job as far as the city, bringing it back to what the city was back in the day, full of great basketball players."

"That's our whole job, that's our duty. Chicago's been known for violence. I know the news really takes a negative approach to our city and they don't help us too much in that. But for us being young men out of the inner city, especially going to public schools, that helps us a lot."

It takes a special set of kids to help change a national perception as dreary as Chicago's, but the latest batch of young basketball stars are well on their way to doing everything they can. The South Side youth already views Rose as an Obama-like figure, and it's obvious that Parker and Okafor are following a similar path.

It's the best thing that could have ever happened to this city when violence is so rampant. There's hope in Chicago, and it can be found in its youngest emerging basketball stars.