So you're coming to the Final Four? We answer your questions about the host city and its many charms.

Share All sharing options for: 2013 Final Four: An out-of-towner's field guide to Atlanta

You may be coming to the Final Four to watch basketball. If you want to do that you will need to travel to Atlanta. You should also know things.

Do not call it "Hotlanta." No one has ever called Atlanta this, at least not in the 21st century. Acceptable nicknames for Atlanta are:

How is an Atlanta? Founded in a Waffle House in 1847, the city of Atlanta bears the proud mark of being the only city formed and shaped by the "Free and Rowdy Party," a group of brothel owners and booze barons labeled "The party of militant disorder." Atlanta's first mayor ever was Moses Formwalt. Moses Formwalt was also the only Atlanta mayor ever stabbed to death, and made his money selling stills for shine-makin'.

This explains everything one need know about the basic motivations of the city: stuff comes in, the people who sell it come with it and locals make money plying them with liquor and strippers and by booting their cars when they park badly. The rule is easy: don't park anywhere, ever. Remember this and you will be fine, tourist.

DID YOU KNOW: Atlanta's traffic lights have not been synchronized for optimal traffic flow since the 1970s.

What is an Atlanta? For your purposes, it will be the Georgia Dome, home of the Final Four this year, your hotel, and perhaps a few restaurants or attractions you can visit in the interim. There is a whole schpiel about Atlanta's oddball economy that goes here: we're the home of UPS, Delta, Home Depot and yes, Coca-Cola, but also the home of Adult Swim, the modern hip-hop-industrial complex and the pre-demolished look and convenient state tax credit that makes filming The Walking Dead here so plausible. They also filmed the Hunger Games sequel just down the street from my house. Jennifer Lawrence walks on two legs like the rest of us, and occasionally goes to East Atlanta to drink.

DID YOU KNOW: Archer is made in Atlanta at Floyd County Productions. I saw Lucky Yates, the voice of Dr. Krieger, at Trader Joe's in Midtown the other day. He was buying expensive snacks and cheap wine just like the rest of us.

Tyler Perry? We're sorry about that, but yes. On the upside: he does employ a considerable number of people here, so consider yourself an accomplice simply by passing through. You're welcome, and Temptation: Confessions of a Marriage Counselor is in theaters nationwide right now. (Kim Kardashian's in it! Again, we're sorry!)

Why is an Atlanta? It is a point of transit that got intentionally clogged, basically. Five million people live in the area, but only 432,000 or so live in Atlanta proper. This can give intown living a cozy small town feel. This is great if you are monogamous, and deeply problematic if you are not. I would like to thank people who have actually had sex for helping me with that last part of this preview.

DID YOU KNOW: Famous stuntman and badass Dar Robinson base jumped from the Westin Peachtree Hotel in 1981 for the Burt Reynolds film Sharky's Machine? This explains a.) an entire generation of Atlanta children's fascination with Burt Reynolds and b.) I really just wanted to remind everyone that Dar Robinson was and is a god among men.

What is in the suburbs? I have no idea, aside from a large chicken in Marietta. 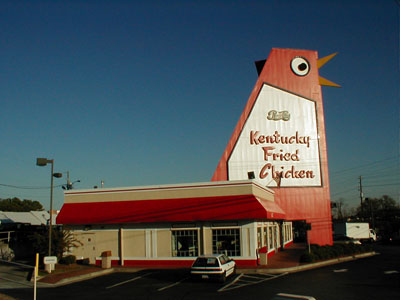 How do I get to the Dome? If you are staying along a MARTA line, this is simple. The train runs right up to the Dome and will bypass numerous road closures downtown. If you choose to drive, this will be you:

DID YOU KNOW: The Centers for Disease Control houses some of the deadliest viruses and bacteria known to mankind, and does it all in a Level 5 laboratory located "somewhere inside the Perimeter." Gallons of turbo-plague and Turkish Blood Fever could be right under your hotel, for all you know. Sleep well.

Can I get a taxi in Atlanta? It is debatable whether taxis even exist here. There are cars labeled "TAXI" that will occasionally pick you up on the street if you flag them down. Calling them works about half the time, if they can find you, and even then getting to a destination without handing them your iPhone is tricky. Cabs in Atlanta travel at two speeds: 15 miles an hour or 75 miles per hour. You may be asked to exit at either, so try to hit them on the slow cycle if possible. Carry cash, because credit card technology and using turn signals are both foreign concepts to ATL cab drivers. Try complaining about this! It's fun, makes your experience worse and changes nothing about the quality of your time here.

Where should I eat/drink? For the most important section of this primer, we bring in ATL chef Eli Kirshtein:

 So, you’re coming to my fair town and you need somewhere to go? A place where you will stick out like a sore thumb as an out of towner, by continuing to refer to the city as "Hotlanta?"

Restaurant Eugene: Amazing fine dining in Buckhead. If you’re ready to big ball it and get the luxury treatment, this is where to go! Great service, so you know you’ll get taken care of and have a great meal in a intimate environment!

Empire State South: Want to play some bocce ball in a courtyard? Get overly competitive with a fellow out-of-towner till it reaches a uncomfortable point of no return, then hang out at a energetic bar, followed by sitting down for a great meal? This is the spot. In Midtown, a great place that does breakfast, lunch and dinner.

The Spence: Located right next to the Georgia Tech campus, which will give you a reason to actually see campus, because, well sports really don’t help in that department. A fun, high-energy restaurant with playful and tasty food. Plus the chef wins the award for Most Committed to Looking like a Land Shark.

For a more middle of the road experience (looking at you, Louisville fans who knew this was coming and were smart enough to start saving months ago)

Ormsby’s: With indoor bocce and skee ball, as well as a strong beer program, this is a place you can come hang all day or into the night. Solid clientele that you don’t have to worry about anyone shanking you.

Holeman & Finch: Right across the breeze way from the previously mentioned Eugene. Great bar with great cocktails. Plan ahead, place gets packed. And when you Google this restaurant you will find much ado about the burger. If you really want one, go to brunch. You have about as much of a chance of getting one at 10 p.m. as the Shockers do of winning this tourney.

Brick Store Pub: Amazing and extensive beer list in Decatur Square, with a bar staff that really knows about the stuff. Getting ready to feel inferior about your tastes in beer!

For those looking to visit the seediest, dingiest, nastiest places (looking at you, fan who way overpaid for a ticket on Craigslist in a fit of hysteria while watching your team win in the Elite 8)

The Clermont Lounge: Where strippers go to die. With an average age of around 50 and an average weight around 250, this is the place to go late. Like really late. Ask for Blondie!

Trackside Tavern: A place that is so evil, that even when it burned down, Satan rebuilt it still. Located in Decatur, and formerly know for serving booze way past last call. Good place to go after you are thoroughly boozed up at the Brick Store. Proceed at you’re own risk.

Northside Tavern: A quite lovely place really. Trashy pool tables, live blues bands. Not a great date spot, but right down the road from the Dome.

Seriously though, have fun, be safe, and take a cab because it's risky business in the A.

Did he miss anything? I'd also recommend Homegrown on Memorial Drive for a laid-back brunch, the Highland Tap for subterranean frat-drinking in Virginia Highlands, and the Book House Pub on Ponce de Leon if you're feeling a need for luxury hipster drinking. If all else fails, pick a strip of bars and play the numbers in East Atlanta (home of the Earl, The Flatiron, and Midway Pub) or in the Virginia Highlands if you're wearing khakis. For the adventurous, try Church (A Bar!) on Edgewood.

Oh, and barbecuistas should go to Fox Brothers BBQ, because you're probably going to end up there anyway. Fat Matt's is for peasants: avoid it.

DID YOU KNOW: Ted Turner's penthouse is the one flying the UN flag on top of the old Bona Allen building downtown. Ted sometimes stands on the balcony, shooting middle fingers in all directions and grinning while wearing nothing but a onesie made of hundred dollar bills.

Can I sing live karaoke with a metal band? Starting at 9 p.m. at the 10 High on Friday and Saturday nights, yes, yes you can. I recommend "Whole Lotta Rosie" for maximum crowd participation. It and the cigarette smoke you will encounter in any Atlanta bar are both free.

Are there other, what is the word ... attractions? Yes, particularly if you're traveling with family and don't need anything too terribly far-flung.

I'm terrible at planning. Tickets? The scalper's market for Final Four and for events in Atlanta is a robust one. Bargain hard and you will prosper. If you're concerned about breaking the law--and scalping is illegal in Georgia when conducted without a resale license--know that buying tickets for face value is legal between unlicensed participants. That extra 20 dollars you gave the seller? Just a tip for quality service, officer.

DID YOU KNOW: Atlanta rapper Guwop, aka Gucci Mane, is currently in the Fulton County Jail on assault charges. Say hello to him as you pass the ominous-looking structure on Garnett Street. There is a chance he may be able to simply walk out of the jail: several inmates did during the shooting of a T.I. video there several years ago.

I've heard Atlanta is famous for, um-- The Cheetah is the mafia-ish strip club. Magic City is the one you saw on BET Uncut. The Pink Pony is located near the CDC's offices and is a favorite lunch spot for some of its employees. It's a middle ground between the previous two. The Clermont is more of a cultural experience than a strip club, and the Gold Rush and Foxy Lady are for seasoned explorers only.

Also, there is a $350 license required of exotic dancers in Dekalb and Fulton Counties, so professionalism is the word. (Thanks, @strippertweets!)

When I'm leaving, I should: Build in time for TSA at Hartsfield, since they're leisurely but generally very friendly, and also for a trip head to Terminal E for One Flew South and its duck tacos.

DID YOU KNOW: The phoenix is the symbol for the city of Atlanta. It represents the city's rebirth from fire, and was chosen because it looks badass painted on the hood of a muscle car or donked-up Chevy Caprice.